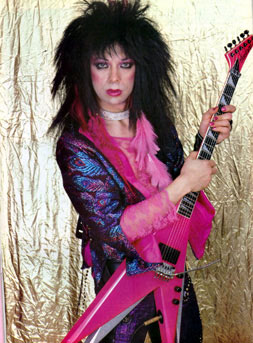 The Vinnie Vincent Invasion, most notably in the person of Vinnie Vincent himself—zealous maestro, harebrained virtuoso, turbulent shredder—is the sine qua non of any study of over-glammed, jigsaw-assembled heavy metal music. The band crashed the bus of Hollywood campiness right into the bedrooms of American teenagers from Oregon to the tip of Long Island. In her seminal 1964 essay, “Notes on ‘Camp,” Susan Sontag identified campiness as frivolity, “artifice and exaggeration,” “naïve” pretentiousness, and “shocking” excess. She should have seen the Vinnie Vincent Invasion.

Vincent, born Vincent John Cusano in 1952, was an anonymous session player boosted to overnight rock stardom when, in 1982, he was brought in to replace KISS guitarist Ace Frehley, himself a casualty of 1970s celebrity excess. Though Frehley would continue to appear in the band’s music videos, Vincent’s uncredited studio work on the 1982 “Creatures of the Night” album set the stage for him to join the band when a drug-addled Frehley proved unable or unwilling to move off the couch to accompany the band on tour.

Although Cusano sought to retain his birth name as a member of KISS, Gene Simmons, presiding entrepreneurial spirit of the band, invented the stage name Vinnie Vincent (Vincent would keep the name). Paul Stanley, artistic soul of the band, proposed an Egyptian warrior persona for Vincent. This required him to don face paint in the shape of an Ankh spread across the forehead, brow, and bridge of the nose. Vincent’s “Ankh Warrior” character has since been honored with an action figure.

Vincent appeared on the following KISS album, “Lick it Up” (the first without trademark makeup). To the naked eye, he seemed a full-fledged member of the band. He recorded in the studio, strutted in the videos, performed on tour, and posed for publicity shots; but his relationship with KISS was tumultuous and never more than tenuous from the start. Band members soon grew weary of his guitar-god ambitions. He was booted from the band at the end of the tour.

In the video for “Lick it Up,” one of two he filmed with the band, we see a scrawny, raffish Vincent, thirty-one years old, who never appears entirely at ease with the rest of the band. He is like an awkward younger brother tagging along while an assertive Paul and beefy Gene ham it up for the camera.

On the album “Lick it Up,” one can already sense Promethean sparks flashing out on Vincent’s solos (though not in the song “Lick it Up” itself, which has remarkably restrained guitar work). One imagines a skeptical Gene eying Vincent askance.

Gene has gone on record saying that Vincent was “fired for unethical behavior, not because of lack of talent. The guy was very talented. He was unethical. He was fired.” Who knows what this means in the universe of KISS, but it may have been the greatest gift KISS could give. They hauled him up from the shadows, a little known axe-man for hire, staff songwriter for “Happy Days” and “Joanie Loves Chachi.” They loaned him some stardom, and it was time for Vinnie Vincent to shine, to burn fitfully but magnificently, to throw off a dazzling, bald glare from the center of the 1980s glam rock revival, what the nostalgia industry has since termed “Hair Metal.”

Talk about flash. Vinnie’s got it. And then some. He doesn’t know what to do with it all. He is like a crate of fireworks ignited in a wind tunnel. Still stinging from his estrangement from KISS, he quickly assembled an all-pro crew of LA musicians to record his first solo album, the eponymous “Vinnie Vincent Invasion” (1986).

Although Robert Fleischman, who served for a short time as the lead singer of Journey, recorded the vocals on the album, it was the Bon-Jovi-esque Mark Slaughter who appears in the outrageous video, lip-syncing Fleischman’s words to the lead single, “Boyz Are Gonna Rock.”

For teenaged boys/boyz stewed to their eyeballs with boiling loads of testosterone, Vinnie’s screeching staccato performance was breathtaking. He was wild, literally; he looks feral, for Christ’s sake, and he’s completely out of control. No wonder the record company tried to drop him a few years later. This is a plectrum apocalypse. He wields his guitar like a flamethrower. He spurts out thousands of notes, like burning sparks, sometimes hammering the strings with a microphone while on his knees. He peaks and then peaks some more. 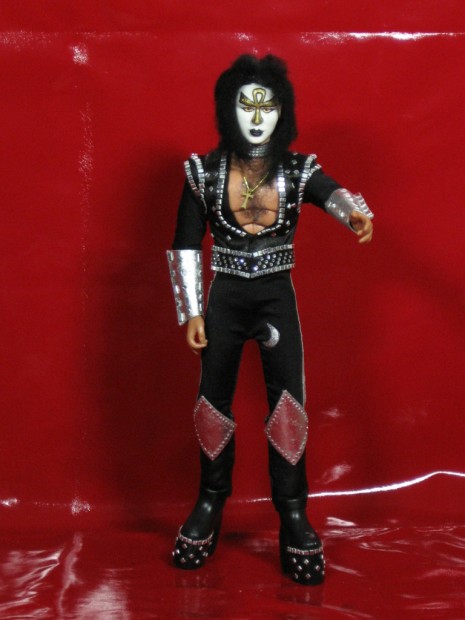 The video begins with the slender, almost delicately feminine Vincent, posed spread-legged, thrown into relief before a colossal neon logo, his personal double “V” (note his custom double-V guitar as well), as attendants in jumpsuits bounce into action like a Bond villain’s nameless cohorts. Vincent pumps his guitar overhead like a sacrificial offering to some unseen, unknowable guitar god. For a few moments, he has our undivided attention. It is, after all, his band. His song. His video. His initials (or the ones Gene gave him) are in abundance. But watch. He wants to remain the center of the camera’s attention, though he must yield some of the spotlight to the lead singer, traditionally the focal point of a video, and the other primped members of the band.

Still, he wants you to look at him. He jabs his guitar into the camera. He seems to do everything with the instrument but play it. If you listen, there are three guitar lines being played simultaneously in the introduction to the song, yet he devotes little time or energy to mimicking any of it in the video. He needs his hands free to cajole us, to pump the smoky air. Half the time, his beloved guitar has been reduced to a prop, an elaborate bauble, when not brandished as a potential weapon.

The standard repertoire of visual ploys is fully in evidence, but it gets better. Watch on, watch on. The glamour is almost too much to bear. The buff drummer, aptly named Bobby Rock, wears silver sequined braces over his otherwise bare torso. The bassist, Dana Strum, and singer, Mark Slaughter, look as though they were doused in pancake syrup and pushed through the clearance aisle at Frederick’s of Hollywood. It’s too much. It’s all too much. The song is shrill and insistent. This is unadulterated, oversexed braggadocio, Sunset Strip-style.

The song begins subtly enough: “I’m a sex-shooter / Hot teaser / Love pleaser. / Got a lust that kills.” Watch out, ladies. Then we’re told to “hail the rock brigade / The street boys on a rampage / Got a fire burnin’ in my veins / The wilds howlin’ out my name.”

To be fair, the whole rock world turned out for video shoots similarly attired in those years. Just look at Vincent’s former employers, KISS (a judge ruled, to his endless chagrin, that he was never a member of the band, only a paid musician). Believe it or not, this was the style of the era. The decade hit some people harder than others. It dropped like a load of bricks on Vinnie.

But to return to Vinnie’s “The Boyz are Gonna Rock”: Not content with glitter and jewels, gavotting and air-humping, the band really slips into overdrive around minute mark 3:55, when Vincent hurls his guitar to the stage, mounts it, and begins to lick it(it’s really out of the bounds of this essay, but it’s hard not to wonder how much cocaine was snorted during the making of this video). From here, things genuinely start to go haywire. Soon after Vincent’s impassioned tonguing of the fret board, Bobby Rock’s cymbals mysteriously transform into clay. They shatter like dinner plates when he strikes them. Vincent then grimaces once more and thrusts his guitar like a lance into the Marshall stack, which explodes (from behind, for some reason).

But this is not the final coup de grâce (“blow of mercy”). Oh, no. At 4:10 we are treated to a grown man fully aflame atop a tower, leaping down onto the stage behind the oblivious lead singer, flailing desperately about for several seconds. Was this intentional? He leaps out of the frame and Vincent proceeds to tenderly kiss his guitar (shades of Hendrix) before summarily smashing it (perhaps this is the true blow of mercy).

Dana Strum, half-heartedly joining the fray, rather anticlimactically topples his bass stack, as Bobby Rock, bass drum now (extraordinarily) also aflame, begins to distribute his kit from the riser onto the littered stage, which is beginning to resemble a field of medieval battle (who cleans up after these bands?). Vincent emerges from plumes of steam triumphant. Evidently, he has conquered his own song, along with all manner of logic and good taste.

His victory would be short-lived. Although the band would release one more album, 1988’s “All Systems Go,” and even land a soundtrack single for “A Nightmare on Elm Street 4: The Dream Master,” they were not long for this world. On the tour to support the second album, the moribund band broke apart under pressure from the record company, which insisted that Vincent had become megalomaniacal. No one seems to have disagreed.

Adding insult to injury, Mark Slaughter and Dana Strum proceeded to enjoy great success in the radio-friendly, and remarkably photogenic band Slaughter. Drummer Bobby Rock briefly joined his former bandmates before going on to play with Nitro (see the controversial installment #3 in the series) and pop-metal novelty act Nelson. Vincent would go on to muddle in obscurity, releasing a little-heralded solo album, “Euphoria,” in the 1990s.

Whatever else may be said about Vincent, he achieved a certain notoriety, and he certainly had fans (though both albums fell a bit short of “gold” status, which required sales of a half-million records, sales were nonetheless impressive by any standards; they did make their mark). Most importantly, though, he serves as an exemplar of campy heavy metal.

Merriam Webster defines campiness as “something so outrageously artificial, affected, inappropriate, or out-of-date as to be considered amusing.” It would be hard to improve on that as a definition of the Vinnie Vincent Invasion. They could be cross-referenced with the very word.

Vincent sums the era’s hopes, desires, illusions, and failures amply, in fact perfectly, and we would do well to thank him and his short-lived band of glam brothers, The Vinnie Vincent Invasion, for telling us so much about the era that created them.

RSS Feed
Ernest Hilbert is the author of two collections of poetry, "Sixty Sonnets" and "All of You on the Good Earth," as well as a spoken word album recorded with rock band and orchestra, "Elegies & Laments," available from Pub Can Records. He hosts the popular blog E-Verse (www.everseradio.com) and the E-Verse Equinox Reading Series at Fergie’s Pub in Philadelphia. His poems have appeared in The New Republic, Yale Review, American Poetry Review, Harvard Review, Parnassus, Boston Review, Verse, New Criterion, American Scholar, and the London Review as well as in a number of anthologies, including "The Incredible Sestinas Anthology" (2013), "The Swallow Anthology of New American Poets," and two Penguin anthologies, "Poetry: A Pocket Anthology" and "Literature: A Pocket Anthology" (2011). He works at Bauman Rare Books in Philadelphia, where he lives with his wife Lynn Makowsky, the Keeper of the Mediterranean Section at the University of Pennsylvania Museum of Archaeology and Anthropology. More Ernest here.