There is a George Price cartoon where a packed room of ill-matched eccentrics, high society types and zoo animals are congregating for a round of socially disastrous cocktails. I can’t remember the exact details, but if memory serves, there are two flamingos off to the side, one of whom is saying to the other, “who made up this guest list, Norman Lear?”

Which is exactly what I wonder while watching these Dick Cavett clips. In fact, the entire “Dick Cavett Show” is a mystery to me. Maybe I should qualify that the aim of the show seems clear: Cavett & Co. are hell-bent on creating interesting television. And sure, mission accomplished, but not, methinks, in the way they were intending. They seemed to want to create some kind of latter-day salon, where the mild-mannered Cavett would moderate as the great men and women of letters, cinema, entertainment and the world at large congregate and talk loftily about their craft.

But which moron of a producer thought it was a good idea to have an octogenarian Groucho Marx (who, strangely enough, reminds me of my grandmother here) and Truman Capote together in the same room? Given Marx’s apparent state of elderly confusion, who thought to have him on the show at all? And which producer thought that this irascible old goat would have any patience for the gayest man in world history? And of course, Groucho doesn’t; he doesn’t even address Capote by name (a brief digression: can we pause to note how short all these men are?).

And then there’s Cavett himself, the whitest of men, the ur-WASP: mayonnaise on crustless Wonderbread, personified. His features are handsome, on paper: the roman nose, the firm jawline, the blue eyes, all razor sharp. Yet, he’s strangely sexless, even characterless, and not in a mysterious, or mercurial way; just bland. And his voice: his glib, obsequious, nasal voice. He elicits enormous pity from me, because his efforts at hanging back, at letting his guests assume centre stage, translate as toadying, or worse, shit-eating; and it seems as if they have nothing but contempt for him. For instance.

Of the four segments of this clip (all of these clips have further segments, by the by, and if you have the time, I encourage you to watch them all), this is by far the hardest to watch. In trying to wrangle John Cassavetes, Peter Falk and Ben Gazzara, Cavett becomes The Square, and is painfully stripped of his masculinity. The trio of cinematic macho-artistes are contemptuous of Cavett’s profession, his interest in them, and his attempts at composure. To me, this clip is pure high school: the three jocks are gleefully trying to give the nerd a wedgie, while the nerd is trying desperately to maintain some tiny semblance of dignity (eventually, of course, Cavett walks off — of his OWN SHOW! — and has to be cajoled back by a stage manager).

I can’t end on this note. I have to give Cavett his due, and so I leave you with two victories. The first, over a blustering, indignant, rampaging Norman Mailer (who really was always a victim of his pretentiousness and ego).

The second victory takes a little setting-up: Katharine Hepburn refused to give television interviews for most of her life, and the Dick Cavett show had been jockeying for an exclusive for years. Finally, one day, she was in the building, and decided to have a look-see on set while they were doing a tech-run. And (this is why we love La Hepburn) she decided, ‘well, I’m here, I might as well.’ Cavett was hurriedly summoned (which is why he’s in his casual tennis whites), and, after a brisk bout of set redecoration, sat down for a 3 hour (!) impromptu chat.

This is a signal victory, not only for Cavett, but for Hepburn lovers: Here She is, in all her patrician glory, radiating upper-class New England pride and privilege. I know of no one else who can stretch their legs out in a low slouch and still exude regality, holding court with her tales of precocious self-determination, guiding the viewer on the highs and lows of the Life, Loves and Losses of Miss Katharine Hepburn. She even tries to correct Cavett’s obsequiousness, in her own delicate way (at the beginning of part 3: “you keep interrupting the long story of my life, if you’d just shut up, I could tell you!”).

This is but the initial bit, in which HRH Hepburn rages against ’70s TV set decor; the whole thing is, as I’ve mentioned, 3 hours long. If you have the time, I urge you to sit through the whole thing. It is to die.

I’ll spare you Cavett’s self-serving retrospective intro to the interview; this is where it begins in earnest (click on picture to watch): 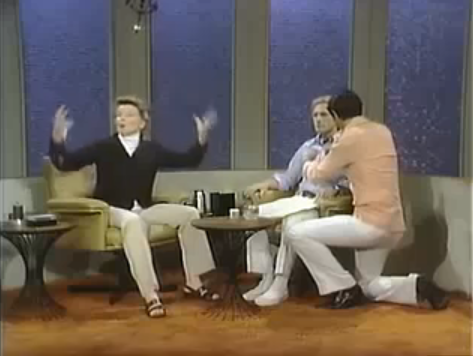 RSS Feed
Sholem Krishtalka is an artist currently living in Berlin. His work has been shown in Canada, the US and Europe. Exhibitions include “Them” (Perrotin Gallery, New York) and “Sex Life” (SAW Gallery, Ottawa). His writing has appeared in Canadian Art Magazine, Bookforum Online, C Magazine, CBC Arts Online (among others) and in various artist's catalogues. For more Sholem Krishtalka, click here.