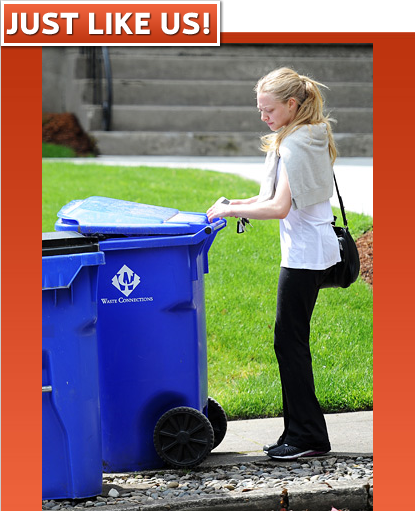 One of my favorite things is the celebrity tabloid magazine US Weekly’s feature, “Just Like Us!” in which candid paparazzi shots of whichever latest object of public fixation are splayed luridly across two-page spreads. They’re shown sneezing, pushing grocery carts, blowing their noses, picking gum off of their shoes; all evidence of their banal humanity.

I find this section so hilarious largely because it’s so absurdly obvious: being ubiquitous doesn’t exempt Beyoncé (or whomever) from having a nose or mucosa; of course she needs to expel some of it once in a while!

I have met few celebrities in my time, mostly in silly circumstances (I used to work at a chain bookstore in my hometown of Montreal, and stars would shop there if they were in town). My first instinct upon meeting them was to laugh. Their place was not in front of me, in human dimensions; they’re supposed to be 20 feet tall, on a giant screen. Milla Jovovich was supposed to be dressed in rubber Jean Paul Gaultier suspenders leaping from futuristic buildings, not disheveled and sweaty (but still totally gorgeous, PS) buying $300 worth of dog books from me on a steamy August night.

So, while “They’re Just Like Us!” is objectively absurd, it’s simultaneously astute in this strange way: they have bodies; they have banalities; and how easy it is to forget this as they float – pre-recorded, disembodied, pixellated – across my horizon.

The following videos were just made public. They arrived to me via my friend John Webster, who found them via the website of James St James, who found them on YouTube, via soapbxprod, who, according to her YouTube profile, is a documentary filmmaker named Carole. And Carole apparently received an armload of Roddy MacDowall’s silent home movies.

The constellations of these stars in the firmament of MacDowall’s beachhouse deck fills me with awe; my mind reels at what possibilities, relationships, conspiracies the various cliques might imply. Lauren Bacall and Rock Hudson! A nude Anthony Perkins (lounged, odalisque) talking to some bald guy, then calling Roddy MacDowall a fucker! Jane Fonda and James Fox! Kibitzing, tanning, eating, swimming, gossiping! (And what kind of high-octane gossip!)

(And just think – these are the three- and four-minute snippets that Roddy MacDowall has allowed this woman to have! What exists outside of these margins? My mind reels at the thought of what all these superstar gays – James Fox, Sal Mineo, MacDowall himself, Rock Hudson, Anthony Perkins, together in one house? – got up to with a camera rolling.)

I won’t say much more about these films. Though I enjoy celebrity gossip, I am not a connoisseur. There are people who know far more about them than I do, who would be able to recognize people I don’t. But the main reason I abstain is that there’s little need to comment on them: they are their own commentary.

Among the many things that amuse me about these videos is how these stars react to Roddy’s camera. Here are a houseful of people who make their living by the camera, enacting a career’s worth of lurid, emotional scenarios for it; and what do they do when Roddy turns his attention on them?

They do what anybody does. They make ugly faces and stick out their tongues; they go cross-eyed; they laugh awkwardly. The women strike glamour poses, which intrigues me above all else. When we little people strike glamour poses for candid videos, we imitate the stars; whom on earth or in heaven would Lauren Bacall be imitating when she camps a glamour pose? Herself? When we lounge on a beach, we aspire to the luxuriant technicolour film stills and paparazzi shots in our minds; when Natalie Wood lounges, to whom does she aspire? Who is her reference? These videos are a kind of semiotic collapse: sign and signifier exist in a single iconic vessel. These stars are our aesthetic and cultural touchstones, the ends of our metaphors. And here they are, in their natural habitat, amongst each other, enacting Platonic ideals of glamour and style that they themselves originated.

The circle (both social and semiotic) represented here is so tight, so hermetically self-enclosed; they can be so candid and so relaxed because they are amongst each other. There are no “regular” people for whom they must perform grandeur, or maintain decorum (has Roddy MacDowall betrayed them all, by handing over these snippets to Carole?). It’s like watching a pantheon of deities on their time off. The gods, they’re just like us!

The entire catalogue of videos can be found here. I watched them while eating out of a pint container of ice cream. I suggest you do the same.

RSS Feed
Sholem Krishtalka is an artist currently living in Berlin. His work has been shown in Canada, the US and Europe. Exhibitions include “Them” (Perrotin Gallery, New York) and “Sex Life” (SAW Gallery, Ottawa). His writing has appeared in Canadian Art Magazine, Bookforum Online, C Magazine, CBC Arts Online (among others) and in various artist's catalogues. For more Sholem Krishtalka, click here.