“Avatar” is a racist film. Or at least this has been the persistent allegation ever since its release in December 2009.

Annalee Newitz, editor-in-chief at io9.com was among the first to label it “white guilt fantasy,” another story where the “white characters realize that they are complicit in a system which is destroying aliens, AKA people of colour, and become leaders of the people they once oppressed.”

David Brooks of The New York Times went further, calling it “a racial fantasy par excellence” which “rests on the stereotype that white people are rationalist and technocratic while colonial victims are spiritual and athletic, and that nonwhites need the White Messiah to lead their crusades.” 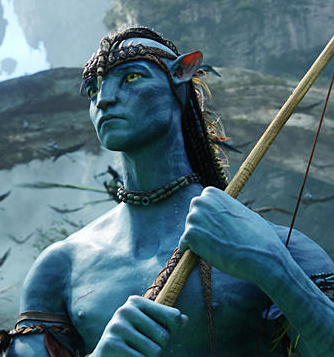 Should the ‘White Messiah’ accusation be taken seriously? I am not alone in wanting to dismiss if not ridicule all this fuss over the politics of a silly and predictable Hollywood movie (visually enchanting though it admittedly is). That is until I begin to think of just how many Hollywood films have shown various peoples of color (minorities, colonial subjects, the Third World poor) struggle against various social ills (poverty, authoritarianism, imperialism) only to be swiftly arrogated by white men (and, from time to time, white women).

Other than being infuriatingly patronizing, such misguided cinematic altruism is dangerous: it reinforces pernicious stereotypes of the ethnic ‘other’ as disorderly, meek and stupid, only to undermine the hard-won voice of marginalised peoples of color and justify their continued marginalization.

Arguably, the more popular the film, the more the potential for harm.  “Avatar,” the highest grossing movie of all time and multiple Oscar nominee/winner, is a particularly weighty addition to this irritating genre.

The examples are many: Brooks names “The Last Samurai,” “Dances with Wolves,” “A Man Called Horse” and “At Play in the Fields of the Lord.” One can add to this inventory “Red Corner,” “City of Joy,” and David Lean’s multiple Academy Award-winning epic, “Lawrence of Arabia,” widely considered to be the classic of all ‘White Messiah’ films.

Lawrence, an officer in the British army, appropriates the dress as well as the struggle of Bedouin tribes in their fight against Turkish aggression and British imperialism. Lean’s anti-imperialist message, if there is one at all, is fully submerged by his consuming interest in the persona of Lawrence (played by Peter O’Toole in the prime of his youth).

Besides being sinfully handsome, Lawrence is brilliant, just and brave; resolute in his determination to “give freedom” to the ‘Arabs.’ Though unaccustomed to guerrilla warfare and Arabia’s harsh terrain, he takes extraordinary risks, like charging fearlessly through the dreaded Nefud desert.  Here he rushes into storms of bullets.

At first glance, “Avatar” is nothing more than the extraterrestrial version of this tired ‘white guilt fantasy.’

It is 2154.  Jake Sully, a former US Marine, is sent to Pandora to befriend its indigenous population, the Na’vi, so that his current employer, an American mining corporation, can more easily access the planet’s rich stores of Unobtanium, a mineral with “exotic properties” worth “twenty million a kilo.”

“Killing the indigenous looks bad,” Jake is told. “Find a carrot to get them to move, or it’s going to have to be all stick.”

Throughout the film, Cameron is clear about whom the Na’vi represent.  They are repeatedly referred to as “indigenous,” “aboriginal” and “savages,” and the lead Na’vi characters are played by Black or Aboriginal actors (Zoe Saldana, Laz Alonso and Wes Studi). 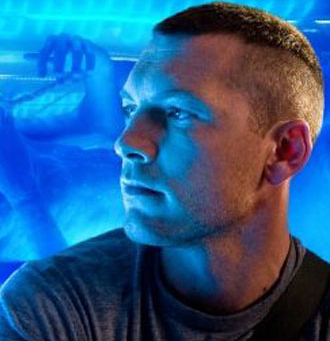 Jake (played by Sam Worthington) plunges into the Na’vi’s midst as an ‘avatar,’ but soon comes to neglect his mission, falling “in love with the forest, the people,” and predictably, with Neytiri, a Na’vi chief’s daughter.  Neytiri teaches Jake her people’s ways because she senses in him a “strong heart” — a good investment, it turns out, as Jake’s “strong heart” guides him to oppose the corporation, and its hawkish security chief, Colonel Quaritch, who later accuses Jake of “betraying his race.”

Though Jake describes himself as “just another dumb grunt,” we learn that he is extraordinary well beyond his “strong heart.”  He quickly adapts to Pandora’s “savage terrain and fierce creatures,” and to Na’vi society, learning their language with enviable speed and matching their physical prowess.

Jake is also a skilled military strategist and negotiator.  He inspires the various Na’vi clans to join forces against the “sky people,” and even subdues the fierce Toruk, a giant bird-like creature that only five Na’vi have ever managed to tame.

Jake prances through the last quarter of the film with fist thrust in the air, showering the Na’vi with stirring calls to action, swooping down on Quaritch’s troops on the newly obedient Toruk, and basking in the warmth of Neytiri’s devotion: “I was afraid for my people,” she coos. “I am no longer afraid.”  In an early version of the “Avatar” script, Jake becomes the leader of Neytiri’s clan.

Despite the many eye-rolling moments, in the end “Avatar” doesn’t neatly follow the expected narrative.

In ‘White Messiah’ films, the native’s world, even when romanticized, is marked as clearly inferior. In “Lawrence of Arabia,” the ‘Arabs’ have rather barbaric ideas of justice, and it is evident they’ll have trouble managing on their own once Lawrence is extricated from their midst. The native, though noble, is backward; wanting in various aspects of ‘civilization.’

Not so much in “Avatar.” For one thing, the Na’vi’s lush habitat is profoundly more beautiful than the humans’ “dying world.” We are told that this “strange, bewitching place” with a “dreamlike landscape reminiscent of a Magritte painting” represents “hope for our race, for our planet and future of all living things.”

The Na’vi’s pantheism, community solidarity and oneness with nature (the “symbiotic relationship between all things Pandoran”) are celebrated wholeheartedly, while the American way of life — now associated with corporate greed, ruthless individualism and misappropriated science — is squarely and unambiguously condemned.

The US Marines, give or take a few, are depicted as a warmongering and boorish horde (yes, the real Marines are upset about the film too!).  They kill thoughtlessly and hurl demeaning jeers at the disabled, wheelchair-bound Jake (“meals on wheels”).  Towards the end of the film, any thought that the Na’vi are “savages” seems utterly preposterous. 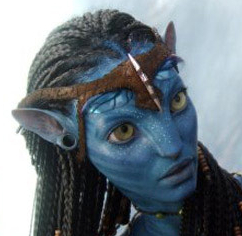 It’s clear that the Na’vi need nothing from Jake’s ilk, not their promise of ‘development’—“medicine, education and roads”—or their “light beer and shopping channels” or military technology. The Na’vi may lack the coarse firepower of American bombs and guns, but they have “arrows dipped in a neurotoxin that can stop your heart in one minute.” In fact, it is with these instruments of precision that Neytiri ultimately kills Quaritch. Yes, it is she who saves Jake.

Finally, in a fundamental departure from the ‘White Messiah’ narrative, Jake “goes native” in a total, self-incinerating way.  The Na’vi perform a ritual that permanently transforms Jake’s human body into his alien avatar.

So “Avatar” is a curious film: it follows the ‘White Messiah’ model faithfully, but then ruptures it at critical moments.

I’m hesitant to subject “Avatar” to prolonged philosophical analysis—after all, Hollywood movies are known for being inconsistent.  Yet the film’s hybrid narrative is not without significance.  It reflects how multiculturalism, environmentalism, feminism and indigenous struggles have shifted conversations about culture and imperialism while leaving every economic fundamental unchanged.

Indigenous movements, in particular, have issued powerful critiques of imperialism, condemning not only the cruel mechanics of colonial rule, but also their devastating cultural impact via the reification of science, rationalism, and industrialization.  The demands of indigenous movements stretch beyond inclusion and space in dominant ‘white’ cultures to equal regard for difference, marked as this may be by oral traditions of knowledge, communitarian political structures, and spiritual systems based in ancestor worship.

How remarkable that the radical multiculturalism of indigenous struggles is reproduced in “Avatar,” a thoroughly mainstream production.  No wonder that Evo Morales, Bolivia’s first fully indigenous head of state, has praised the film for its “profound show of resistance to capitalism and the struggle for the defence of nature.”

Morales’s pithy tribute left me wondering if behind the racism allegation lie deeper anxieties about the film’s glib indictment of modern notions of progress, including monotheism.  Telegraph blogger Will Heaven—who wrote a scathing review of “Avatar’s” “racist subtext” in December—recently defended a Vatican spokesman’s concern that “Avatar” will turn environmentalism into a “new divinity.” Heaven declared: “He’s right to be worried.”

Perhaps if Cameron had foregone the economic logic of casting Worthington in the lead, he would have made a ridiculously subversive film, one worthy of all the fuss. 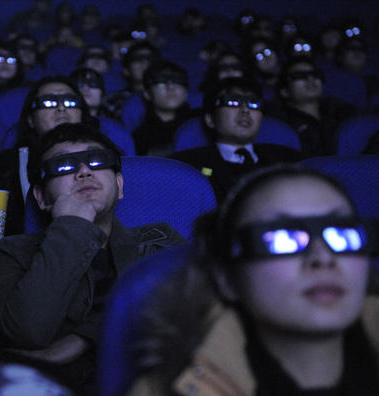 But the point is that he didn’t. And as the possibilities of genuine dissent unravel into a confusing carnival of their cooptation, the racism charges stick.

Cameron delivers his anti-modernity, pro-indigeneity and deep ecology parable through the most advanced of cinematic technologies and the body of a handsome white man.

We get to revel in our equal regard for Na’vi culture from the safest distance possible — 4.4 light years from Earth to be precise — while adjusting our 3D glasses and munching on overpriced popcorn. Cameron has it both ways, knowing that we do too.

RSS Feed
Mitu Sengupta is Professor in the Department of Politics and Public Administration, and a member of the Yeates School of Graduate Studies at Ryerson University. She has published widely in academic journals, and her political commentaries and analyses have appeared in CounterPunch, Monthly Review MRZine, AlterNet, Frontline (India), the Hindustan Times (India), The Toronto Star, Dissent Magazine, and This Magazine.