Presented on stage by Mike Hoolboom at Ryeberg Live Toronto 2010. 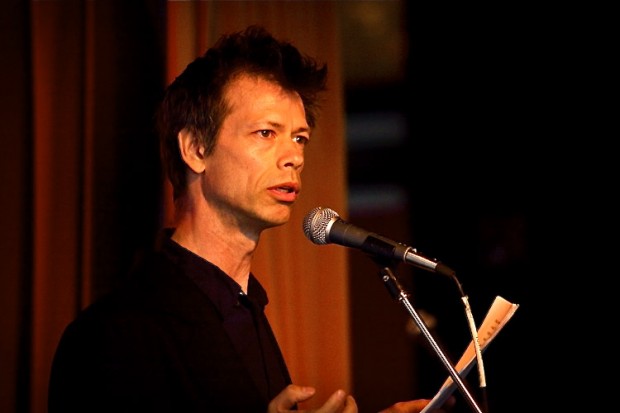 There was a course they offered in high school that was always full, year after year. I wanted to take it, my friends wanted to take it, but we could never get in. But I know that tonight, looking around the room tonight, I know that some of you took this course, some of you have been busy living this course ever since. I’m sure you remember it well. It was called: How to walk into a room.

You know sometimes you’re talking with a friend and you have a destination, you’re moving towards the event, the party, the thing itself. And you do that thing that you always do with the ones you love the best. You ask them questions they already know the answers to. Oh, that feels so good. And then they ask you a question that you know the answer to. Oh, that feels even better.

Please, could we do that again and again? Sometimes you think: This is why I have friends, or at the very least, this is why I love my friends. The old answers, the old questions, the old friends.

But sometimes they’ve taken the course, the special course that you didn’t get to take, so as you get closer to that front door, to that entrance hall, oh yes, you can already hear the familiar hum of genius conversation going on. There’s no doubt about it, they are obviously cracking the DNA code in there, and curing AIDS, and finding a way to criticize Israel’s occupation of Palestine without being called an anti-Semite, and as you get closer to the door you feel yourself shrinking, you watch your hands disappear beneath your coat.

Call them specialists of the first impression.

But this video is not about your friend, or mine. It’s about Patti. Patti Smith. Watch Patti Smith walk into the room (0-3:02):

Who is the youngest person in this room? Is it one of those so-carefully permed child imposters that fill the audience? The ones who are so busy reading the “raise your hands now” signs that they can’t hear a word anyone is saying? Or what about the corporate teenager with the spray-on jeans, the one who lives for the moment when he can lay his hands onto the shoulders of all those almost-young girls, holding them close for the camera, where they can recite their lines. “Where were you born?” “Who is your favourite singer?”

Is that what you would ask Patti, Patti Smith, if you were thirteen, going on 130, and every important moment in your life had been scripted? Rehearsed. Again and again. So that when you finally fell in love you couldn’t help repeating, repeating, repeating the lie you practiced each day in front of the mirror. I love you. I really do.

Patti, it’s a set up, it’s a come-on, it’s a fake. But Patti doesn’t care. Look at her on the stool, kicking her legs out like she was a little girl. They are asking her, the little old girls, about her career, but Patti never had a career. She never filled out the forms, or schmoozed a party. She never did the right things with the right people.

I don’t know what punk rock is, I don’t come from that planet, but there’s a way she holds herself, even against the irresistible pressure… Can you feel that pressure in the room? Can you feel that pressure in this room, that current pushing up against your face? Call it common sense, call it everybody knows, but Patti looks like she doesn’t feel a bit of it. It’s like meeting someone who doesn’t pay any attention to gravity.

I think that’s what punk rock means. But it also means music, of course, making music out of your life, the small moments of your life, where you might refuse, for a moment, the comfort of the old answers and the old questions. Where you throw up a – what the hell is that exactly? – a grapefruit? A superball? – in the middle of someone else’s prime time, just because you can’t help smelling like teen spirit.

And then you walk over to the piano, and start to sing a song you have no business singing. It wasn’t custom engineered for your voice, it’s a song made for the machine, for one of those factory products that can hit notes only bird dogs can hear. It’s been designed for game show winners that can spray their voice across music halls because they don’t feel a thing. That’s the deal they made, the necessary compromise. Yeah, yeah. You get to have the most perfect, most beautiful voice in the world, but you won’t be able to feel a thing. So tell me, where do I sign? (3:03-3:52)

Patti makes her way to the piano massacre without missing a beat. The keyboard player is in one time signature, while Patti is in another. I want to say that she’s singing from her heart, but she’s not. She’s singing from her whole body. The whole body at once is the teacher. Still that little girl from New Jersey playing in the patch. She forgets the words, she skips a verse. She holds the lines too long, she can’t hit the notes, and in her mistakes, in her necessary fragility and failures, she makes the song human again. She makes me human again.

It’s not OK to make a mistake, it’s necessary. It’s the least we can do. At the beginning, as a way to begin with each other. As old Brecht would say, let’s begin not with the good old things, but the bad new ones. So many days sitting at my window, waiting for someone to sing me his song. (3:53-end)

The War Of Pictures

RSS Feed
Mike Hoolboom is a Canadian artist working in film and video. His films have appeared in more than 200 film festivals and he has won over thirty international prizes and two lifetime achievement awards. His 2020 film, "Judy Versus Capitalism" is an experimental documentary about the life of feminist activist, Judy Rebick. He is the author of “Plague Years” (1998), “Fringe Film in Canada” (2000) and “Practical Dreamers” (2008), "The Beauty is Relentless: The Short Movies of Emily Vey Duke and Cooper Battersby" (2012), and a novel, "The Steve Machine" (2008). He has co-edited books on media artists Philip Hoffman (2000) and Frank Cole (2009). He is also co-author of "You Only Live Twice: Sex, Death and Transition" (2016) and a book on David Rimmer (2007). He is a founding member of the Pleasure Dome screening collective, and has worked as the artistic director of the Images Festival and the experimental film co-ordinator at Canadian Filmmakers Distribution Centre. More Mike Hoolboom here.