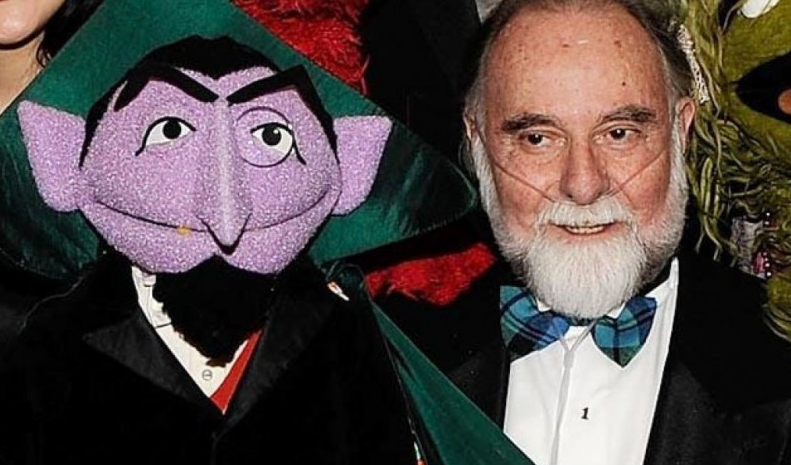 On August 23, 2012, “Sesame Street” puppeteer Jerry Nelson passed away of complications from respiratory disease. Nelson, a longtime contributor to the Children’s Television Workshop, might be best known as the creator, voice and operative hands of Count von Count, the numbers-obsessed, Lugosi-inspired Muppet who informed, delighted, infuriated and terrified millions of children through the 70s, 80s and 90s.

Clicking through old videos, I came across this one, which features the Count as a contestant on Guy Smiley’s game show, “Beat the Time.”

Can we talk about how funny this is? How brilliantly it parodies all sorts of things? I love the way Guy Smiley thrashes around in the curtains, comes wheeling out in reverse, all his showbiz acumen compromised by a few seconds of hysteria. And I love even more the arrogant, sultry entry of the Count, blithely cackling to himself — what was he up to in the green room? — as he skulks centre-stage: “Yes, ha ha ha! Yes, ha ha ha!”

There’s something skeptical in Smiley’s “Hello!” — maybe that faint xenophobia I’m familiar with from having to slowly re-pronounce my name to rednecks. Or maybe it’s just fear. And why not? Let’s not forget the Count’s a vampire. Look at those fangs! It’s a miracle he didn’t tear out Gordon and Maria and Mr. Hooper’s throats as they slept…

For sheer hubris, it’s hard to think of a Muppet who compares to the grandstanding Smiley and the quixotic, self-obsessed Count. Certainly not Kermit, that froggy melancholic, nor the hysterically baffled Grover, nor Big Bird, nor Elmo — feathered and furred half-wits, respectively — nor Mr. Snuffleupagus’s post-pubescent Eeyore, nor even Ernie, who, though a raging solipsist, seems most invested in goading his Jewish roommate into bouts of uncontrollable rage.

But though the skit sets up a similar showdown, its dynamic — tight-wound neurotic v. laconic madman — assures that not only will this lavender-skinned lunatic beat the shit out of the time, he’s going to reveal “everybody’s favourite game show host” and his whole enterprise as a farce.

“I am the Count,” the Count intones — the undead always intone — less confirming Smiley’s introduction than negating it. “They call me the Count because I love to count… things.” Note how Jerry Nelson abandons the accent at the end of this line, emphasizing the sweeping ubiquity of “things.” And the Count’s use of “they” implies such infamy; it subsumes Smiley’s “everybody” into what JM Coetzee might call “some generic [they] so wide as to exclude no one.” They call him the Count, they shiver at his feet. “And now that vast, daunted they, Guy, includes even you.”

(Picture it: A bunch of hard-drinking everymen/women cozied up to some woody bar in the American Southwest. Amid a discussion of weather and crops and football and those greedy fat-cats in Washington, the conversation cycles, inevitably, to the Count. One guy turns to hork a wad of tobacco-muddied rheum into the corner spittoon — ping! — then turns back to the bar, takes a long haul from his Michelob and, shaking his head, with equal parts reverence and awe, concedes, “I’ll fuckin’ say it if no one else fuckin’ will: Goddamn if that motherfucker don’t love to count things.”)

Smiley’s rejoinder: “They call me Guy Smiley because I changed my name from Bernie Liederkranz.” Not only a clever callback, inverting a previous line and playing it for laughs, but also a sly nod to the icky de-Jewifying nomenclature of Hollywood, made doubly hilarious by the fact the audience cheers. (Liederkranz, incidentally, is a brand of cheap cheese.) Meanwhile, the Count is still chortling away at whatever private, maniacal monologue runs on loop through his numerically deranged brain — things counted past, maybe, or the infinitude of things yet to be enumerated in the glorious, teeming future.

What happens next calls to mind my favourite moments on TV: Some starched, officious suit having his authority usurped by a guest who won’t play along. It’s happened a few times on “The Price is Right,” but the most apt example might be Harmony Korine’s first visit to “Late Night;” Letterman seems to have no idea he’s the one who comes off a total chump.

Back to the skit: Next we get to the “Impossible Stunt,” which the Count predictably misinterprets and derails. While Guy Smiley’s worldview unravels (“What are you doing? You’ll never get anything this way!”), with each gleeful, ticking second the joke doubles back and gets funnier; the kicker, of course, is that the Count triumphs not just despite but because of his own ineptitude — classic comedy, from Cervantes through Looney Tunes. (Or might his arithromania be a front? Maybe he’s a sort of Candide-Nosferatu hybrid disinterred from the grave to expose all the cultural ironies to which we’re oblivious? To show us what really, um, counts?)

Then thunder and lightning, and Smiley quakes: “What! Was! That?!” “It always does that when I count,” he’s told (subtext: Smiley, you fucking idiot.) But the Count sounds sort of forlorn here, doesn’t he? There’s such pathos in how Nelson softens the line. When I was a kid the Count’s celebratory weather scared the piss out of me. (Same with Vincent Price’s opening to “Thriller;” I’d leave the room until the music started, every time.) But now the storm cloud lurking perpetually above seems kind of sad. Imagine whenever you did your favourite thing — made love, let’s say — there were great heavenly rumblings and flashes? The first few instances would be cool, sure. But every time? Wouldn’t your life start to feel cursed? Again the Count laughs, but this time with a hint of embarrassment, or discomfort, or loneliness. (Elsewhere he admits, “I don’t have any friends.”)

But let’s not get too maudlin. I want to talk about the skit’s most poignant satirical moment. “You can have anything you want in the entire world,” Smiley offers as a reward. “A trip to Florida, a new washer-dryer, a million dollars—what do you want?” That the Count wants another twenty seconds is a good joke, but it’s also fitting: what else might a person (or felted vampire) desire than that which makes him happiest? Isn’t it “wonderful, wonderful” that he’s discovered what best serves and articulates his soul? How many of us can say this? For Count von Count, counting isn’t just personally elemental, it actually conjures the elements, so intrinsically does it connect him with the web of all creation.

As the closing music plays, Guy Smiley echoes the Count’s “wonderful, wonderful,” suggesting he’s been won over. But the real genius of this skit is that we’re aligned fully with the Count; Smiley’s been revealed as a putz who can only chase behind. And his sign-off is note-perfect for how it captures TV-speak’s dumb aphasia: “That’s all the time we have on ‘Beat the Time,’ so until next time this is Guy Smiley saying, ‘Have a nice time.’” To some producer off-screen, he mutters, “I think we got away cheap this time.”

I don’t, if you haven’t noticed, have much of a point here, and I’m aware that explaining comedy is the best way to ruin it. But since you’ve made it this far, a question: Do you remember what made you laugh as a kid? Besides being tickled, I have no idea what I found funny. It’s not that I have no emotional memories of childhood: In kindergarten I was petrified of Jesus, who was allegedly everywhere, and in grade three I fell so hopelessly in love with Becky Brisco that I would barf in the shower and have to kick it down the drain. And that same year I peed my pants in class and entered a shame-spiral that has remained in a steady vertiginous swirl ever since.

Despite the fact that children are said to laugh about twenty times more a day than adults, my humour memories only begin in adolescence, when gut-wrenching hysterics consumed me over “The Naked Gun” and Adam Sandler‘s “At A Medium Pace” and an absurd sleepover conversation about gecko lizards, which mostly involved repeating the words, “I’m a gecko,” in a lizardy voice until the sun came up. Before that, I think I laughed more out of delight, though it’s hard to say. I do know it’s been a long, long time since I’ve laughed uncontrollably, at least without the aid of psilocybic mushrooms. And I’m sure I never found the Count’s triumph over Guy Smiley funny until a couple days ago.

I have nowhere to go with this, really. It’s just something that occurred to me while I was writing this down and I’m feeling sort of stunned. So, instead, let’s return to the last moments of “Beat the Time with the Count!” Everybody’s favourite game show host, all these moral and cultural lessons lost upon him (but not on us!), hustles off to shoot another episode in a neighbouring studio. Rush, rush, corporate drone — while Count von Count summons another maelstrom of delight.

RSS Feed
Pasha Malla is the author of "The Withdrawal Method" (stories), "All Our Grandfathers Are Ghosts" (poems, sort of), "People Park" (a novel), "Erratic Fire, Erratic Passion: The poetry of sportstalk" (found poems), "Fugue States" (a novel), and "Kill the Mall (a novel)."