Although Quiet Riot helped to push the term “metal” further into the light with this early success (it was the first heavy metal song in the Billboard top five), they were really more of a hard rock act, and as such they did not present a particularly outrageous look, aside from the bog-standard spandex and kerchiefs.

Their initial success proved easy to achieve but difficult to sustain. After a disappointing second album (also featuring a first single originally recorded by Slade), they made one last grasp for commercial relevance (they had no artistic relevance to squander) with “Quiet Riot III” in 1986 (note, “Quiet Riot I” and “Quiet Riot II” were released only in Japan before their US debut, but just to confuse the matter the band also released an album in the US in 1988 called “Quiet Riot,” featuring a new lead vocalist).

It is saddening to watch a band struggle for its very existence after a brief flash of success. What little imagination the band may have relied upon to write the songs on their first major album was sapped by the time they began work on “Quiet Riot III,” but they slogged ahead with help of producer Spencer Proffer, who enjoys songwriting credit on most of the album’s tepid tracks.

When the smoke cleared, the pick of the litter turned out to be “The Wild and the Young,” released as the lead single from the album and made into an MTV video that failed to impress rock fans — who were already turning toward more “authentic” heavy metal bands like Metallica — and was soon dropped from rotation.

“The Wild and the Young” is a simple paean to youthful energy and optimism, but the video is an overambitious fiasco (note the futuristic, twelve-wheeled troop transport, called the “Land Master,” on loan from a studio back lot, originally used in the 1977 sci-fi flop “Damnation Alley“) with an interminable and trite montage introduction, 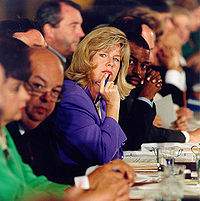 taking us to yet another “Orwellian” future in which rock music is banned. (They couldn’t picture a near future in which kids simply stopped listening to rock, but that’s another story.) This, along with the tedious epilogue tacked on to the video, made it abundantly clear, if evidence were needed, that the video was intended as a commentary on the PMRC’s (Parent Music Resource Center) recommendation that the RIAA (Recording Industry Association of America) voluntarily introduce “guidelines and/or a rating system” similar to the MPAA film rating system. Before too long, heavy metal bands began to peddle a brand of slippery-slope political rhetoric. They asked: If authorities begin rating our albums, how long will it be before they ban them altogether?

For the video, the band’s drummer, Frankie Banali, donned a quasi-military outfit that would embarrass Colonel Mohammar Quadaffi. The widely-disliked, loud-mouthed lead singer, Kevin DuBrow, a sufferer of male pattern baldness, sports a wig that would make Dame Edna blush. One wonders if the band sensed any irony in the fact that the one man in the video most persuasively (and elaborately) dressed like a fascist dictator is the drummer of the persecuted band.

Somebody decided to heap as many spangles, silks, and hairspray—in wigs no less—onto a chintzy, poorly-thought-out dystopian plot for an otherwise untenable lead single. The song itself is an overproduced flop, basically a cornball chorus bookmarked by already outdated rap-style “samples” and “scratches,” overlaid with a nauseatingly thick symphony of synthesizers.

Of course, as often in Quiet Riot videos, it all turns out to be a dream . . . . or was it? This is, in essence, the story of their career, poof, gone in a moment, as if a dream, so perhaps it may be credited with a larger symbolic value.

Can it get any worse? Oh yeah.

RSS Feed
Ernest Hilbert is the author of four collections of poetry, "Sixty Sonnets," "All of You on the Good Earth," "Caligulan," and "Last One Out," as well as a spoken word album recorded with rock band and orchestra, "Elegies & Laments." He hosts the popular blog E-Verse (www.everseradio.com) and the E-Verse Equinox Reading Series at Fergie’s Pub in Philadelphia. His poems have appeared in The New Republic, Yale Review, American Poetry Review, Harvard Review, Parnassus, Boston Review, Verse, New Criterion, American Scholar, and the London Review as well as in a number of anthologies, among them "The Incredible Sestinas Anthology," "The Swallow Anthology of New American Poets," and two Penguin anthologies, "Poetry: A Pocket Anthology" and "Literature: A Pocket Anthology." More Ernest here.