Presented on stage by Sean Michaels at Ryeberg Live Calgary 2014. 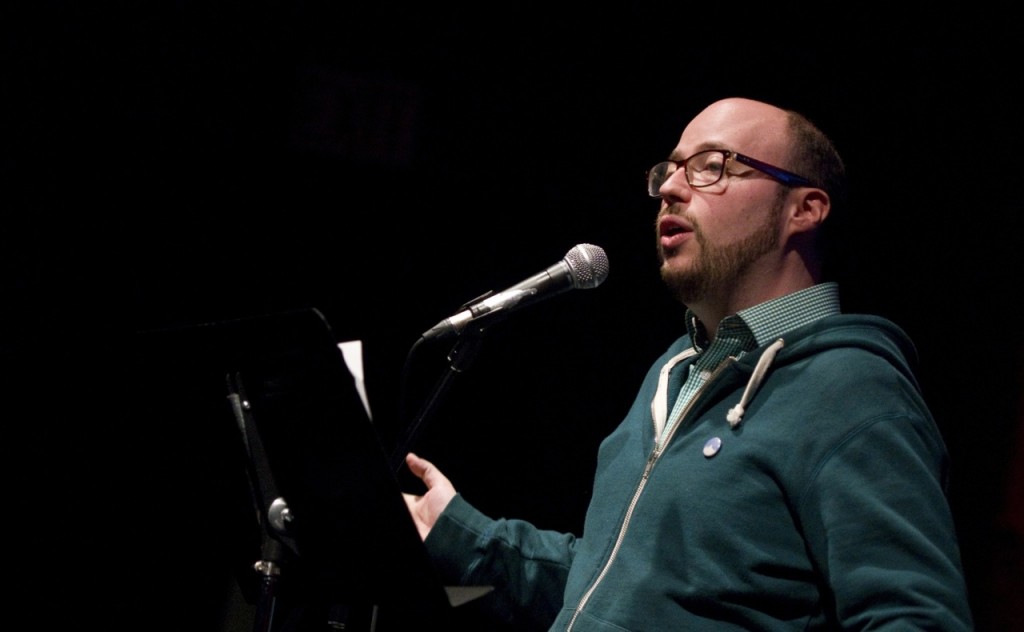 The collection of videos at YouTube dot com contains more worldly wonders than any other archive in human history. The site has served many functions since its launch, nine years ago, but one of these is as a platform for sharing the incredible. Incredible places, pop songs and pets, but mostly incredible people.

YouTube is crammed with virtuosity: jugglers, pianists, bricklayers, Rubiks-cube solvers. People who can recite Pi to 500 decimals, who can teach you to apply the perfect mascara.

Virtuosity is beautiful. It humbles and inspires us. The simultaneous apprehension: I could never do that. / I could do that.

Virtuosity gives the illusion of existing outside social structures: a playground of ability, open to anyone. We marvel at the capacities of mind and body, the synthesis of natural gifts and endless practice. Humanity at its best, and in its full variety – proficient, creative, riding a bicycle with its hands.

In certain ways, YouTube’s garden of the incredible seems like a fulfillment of the liberal-humanist dream. Look what we can accomplish, given simple opportunity. We can juggle like god-kings, surf like seraphs. Our children – quietly and without prompting – can make the impossible appear easy.

The first time I watched this video, it brought tears to my eyes. Something about the beauty of the performance: a gorgeous singer, a proficient cup musician. Also the innocence of it: a child unhampered by doubt, unconstrained by fear, practicing something difficult until it has become easy.

And then YouTube dot com recommended that I look at this video, too.

And then this video.

And it’s not the performers anemic grins. It’s not their microphones and colour-correction and the discovery that the “Cup Song” first appeared, as you all probably know, in the Universal Pictures movie “Pitch Perfect.”

It’s the way virtuosity can so swiftly, easily, become banal. What starts as a lesson in human wonder slumps and blurs until it exemplifies the dull, soul-crushing sameness of most human experience. That sense that we’re not god-kings — we’re sheep.

Viewed from this perspective, YouTube’s resplendency distorts like a funhouse reflection. It is not a garden of the incredible, nor a modern, audiovisual Library of Alexandria. It is a pit of garlanded meaninglessness. It is doom.

It is a place where there is a video called “People Are Awesome 2014” and it evokes no awe at all.

No awe, just the flimsy whine of faint entertainment. This is the other side of that liberal-humanist dream. Given the opportunity to do anything we set our minds to, maybe we’ll all start doing the same things. Or equivalent things. Maybe we’ll all speak the same language, dream the same dreams, becoming the optimal market for a single, calculated product.

This video is hilarious and absurd. As it continues, for me at least, it gets funnier and funnier; then at the same time it is getting darker and darker, more and more sinister. And as I laugh like a fool I have this growing, dawning suspicion that none of us are real, we are all simulations, or empty husks, dumb molecules buffeted by a meaningless universe.

Watching this video, I am filled with wonder. Maybe more than wonder. Yeah: awe. Not for the dancer’s virtuosity. Not for this foreign culture, the exotic other.

I’m awed by its mystery.

Again, I don’t mean the mystery of what this is, who these people are. Those answers are comprehensible, with a little research: this performance is a Zaouli, a ritual dance practiced by the Gouro people of Côte d’Ivoire. It is not centuries old: it was invented by a man called Ouinnaila, about 60 years ago. It is a work of spiritual art.

The mystery is not the who, the what. It is the strange weirdness at the centre of the performance. It feels like magic. It feels like a portal into something Else with a capital ‘e’. The Elseness is the heart of the dancer. Here is a virtuosic performer, an extraordinary human being, who is playing some fragile chord within them.

Here’s another video. From Kyrgyzstan. A little girl named Lara.

In most ways, Lara could not be more different than the Zaouli dancer from Côte d’Ivoire. She is not a performer: she is acting in private. She is listening to a piece of music and then feeling that music, showing us that music. It is not an act of communication: although she looks like a conductor, a maestro, she is not making eye contact with any other person, nor the camera. She is not trying to transmit meaning. She is “conducting” in that other sense: a signal is passing through her. We see it in her face. And again there’s this magic. An Elseness of fearless honesty.

For me it’s magnetic, but as I considered this magnetism I realized that to get a shiver of this, a sense of it, I don’t need a full, bare revelation. I don’t need a virtuoso showing us their secret heart. I just need a taste of a person’s weird, individual humanness. The Elseness that’s inherent in the fact that everyone who is not Sean Michaels is entirely someone Else.

For example, a string of surf-tricks makes my eyes turn into softboiled eggs. But this – this kind of odd surf project – I’m bewitched.

These kids made a parking lot into an ocean. They made a plastic tarp into a 20-foot wave. It’s silly and it’s dumb but I feel the eccentricity of it. Faintly, hazily, the sense of a scene, and its stakeholders, and their particular, differentiated spirits.

Maybe I need even less than that. Maybe all I need is a human being sitting by a window, listening to music. No gimmick, no cute kid or elaborate costume, no grand mystery except the mystery of living. A woman listening to music, getting her make-up done, and then singing along.

We should all find ways to be that, to share that. Not to give ourselves up, pouring the private into the public – but sharing glimpses of ourselves, portions of whatever unique and personal experiences have found their way behind our eyes.

No need for somersaults, for juggling upside-down. Just simply be.

And then there’s nothing more riveting.

RSS Feed
Sean Michaels is an award-winning writer and critic whose work has appeared in The Guardian, The Believer, The Walrus, Rolling Stone and Pitchfork. He is founder of the peculiar music-blog Said the Gramophone. His debut novel, "Us Conductors," which reimagines the story of the theremin, won the 2014 Scotiabank Giller Prize. More Sean Michaels here.