Performed on stage by Jowita Bydlowska at Ryeberg Live Toronto 2012. 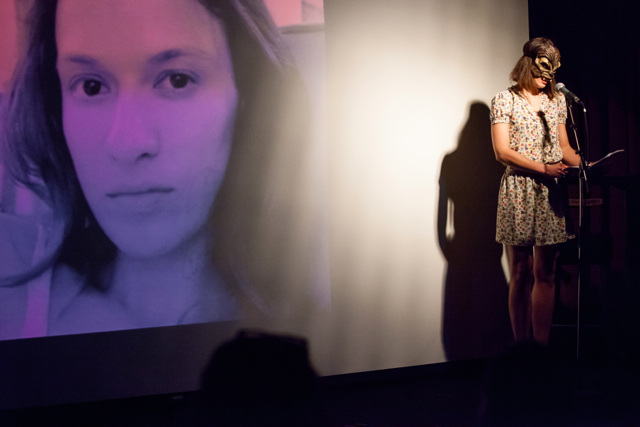 Recently a bunch of different friends sent me a link to the same video because — at the time — I was interested in self-photography and I had a project on the go that involved taking pictures of myself. The video was a smartly put together collage of self-portraits taken over the past 14 years, with voiceover narration by the very subject of all the photos, a Toronto-based photographer named Jeff Harris.

The video’s been viewed by tens of millions on Huffington Post, Vimeo, YouTube, and the Time Magazine website where it originated. Here is the first part of the video (played up to 2:25).

But Harris’s video ended up surprising me. The narrative develops in a way I didn’t expect, the way human stories often do, even if we are aware we are all going through similar experiences and that our stories are repeating themselves.

Above all, Harris’ video made me think about my — our — own compulsive need to document experiences. For me, the urge came on particularly strongly when I found out I was going to be a mother. Until then I was just your average vain young woman who occasionally snapped photos of herself pouting this way or that. Now I was in a body that was nothing like the one I used to identify with. The body seemed to be undergoing a tremendous physical change along with my psyche. It seemed as if I got stuffed into this new, expanding form that wasn’t mine. At the same time, I loved the way it expanded. The ballooning breasts and ass. The belly. My pregnancy was the most definitive proof of life to me. I was experiencing it: life. It was happening inside my own skin.

After my son was born, I realized for the first time that I was also dying. Unlike during my pregnancy I had a hard time finding myself in my post-birth body. It was roomier still but this time somehow emptier. It wasn’t even the fact that my body was larger — it was the fact that it had been inhabited by another creature and now I was — snap! — back inside it by myself and slightly lost. I became an abandoned house.

My body was no longer the one I always pictured in my head — the young one, with its springy flesh, everything shooting upward, all the brightness of youth. For the first time in my life I started noticing how there was a new looseness when I’d sit and let my shoulders slump forward. This physical evidence of wear and tear — of age — was a shock. In a way, I have never recovered from this realization that I am getting old. Or, rather, I have never entirely believed it. Especially back then, four years ago. Today, when I notice signs of ageing – wrinkles, sagging, scars changing shapes — I always think: eventually, this phase will be over and I’ll be me again. But the reasonable me knows that this is not entirely true — I will be me, but I won’t be that me, the young me, the one I still see myself as.

This is why I started taking pictures of myself after having my son — I wanted to document the present day me for the future me, to be able to look back and get a glimpse into the process of dying that is life. I used masks and costumes and set up scenes to photograph myself and illustrate the way I was feeling during that particular day. This was because my identity kept shifting — some days I felt like a doll, others I was more like a werewolf and yet others I accepted the fact that I was simply a woman in my 30s who had given birth to a child.

I noticed that it seemed impossible to make a true self-portrait, catching a true moment — even when I didn’t stage the shots there was something artificial about them because I was always posing anyway. True self-disclosure requires artifice. Self-portraiture is often incomplete. At the same time, masked and staged, my photos seemed more honest to me. And I posed nude — partly because I believed that was bringing me closer to the truth of who I was, too.

I worried that my photos would be boring to strangers, but still I showed them to the world, mostly on the Internet and last year, at an art show in Berlin. Did I show these pictures to the public because of an inherent and perhaps dubious tendency to exhibit myself or am I the product of the times I grew up in – the age of oversharing on social media, the overly personal blogging, the celebration of self? I think it’s a combination of both. And a portrait of self can be a reflection of the world.

“Life In A Day” is described as “a historic film capturing for future generations what it was like to be alive on the 24th of July, 2010.” It includes scenes selected from 4,500 hours of footage submitted by YouTubers from 192 nations. Only 25 per cent of the 95 minute film comes from cameras purposely sent out to different parts of the world to create the project. It’s reminiscent of the films of Godfrey Reggio’s “Qatsi Trilogy,” an unrelenting run of multi-sourced, disparate images grouped by theme and soundtrack.

I thought the film was a brilliant marketing idea: it guaranteed an instant audience at its release – at least 80,000 people — and their loved ones — everyone who would have hoped to see a few seconds of their submitted footage. After all, we’re so interested in our own selves — how thrilling to see a little of our own personal story recognized, elevated beyond its banality and intimacy. How exciting to have a piece of our ordinary life validated by being shown to the audience of the entire world!

As you’d expect, the film is predictable in its themes but then again, so are we. People are being born, people are sick, people are waking up, making coffee and juice, having breakfast, playing soccer, watching TV. It’s not an arthouse feature. It’s got a YouTube feel because this is a YouTube world.

“Life In A Day” is a day out of the world’s self-portrait, one that only captures fragments of its real essence. Like the individual self-portraits, “Life In A Day” is not an essential and entirely true reflection. It’s an edited event, a product. In its effort to be comprehensive, it can only evoke and hint at the things that are beyond its surface. Still, it has vulnerability, a heart beating at its core. This heart comes out of the few small, quiet moments: a father and son getting ready for the day in Tokyo for example — just one tiny wrinkle being created on the surface of its skin, nothing more.

Back in the microcosmos of self-portraiture, there is the impressive story of Jeff Harris. Impressive not just because of his commitment to it. He went out of his way to make it look like as if every day was interesting despite the fact that he had a rather conventional job as a teacher and a seemingly average life. The first time I watched the beginning of Jeff Harris’ video, I thought: Oh, here’s another sucker like me, trying to mythologize his little life, trying to create images to elevate himself above his ordinary life. At least I documented a body that has gone through a change, I’ve exposed myself beyond my limits of comfort.

And then I watched the rest of the video. And it turns out that life, the real thing, can intervene, push in on our self-portraiture. What is most compelling in Jeff Harris’ project is the one element that creates the major wrinkle in the story (from 2:25 to end).

Harris’ cancer appears half way through the video. Judging by the photos it’s a particularly nasty one — it’s pelvic cancer — and it takes away Harris’ mobility as well as some of his youth. His body — a secret house to a vile host of debilitating illness — changes dramatically in the process and yet Harris keeps clicking and clicking, documenting what it means to be human and have the experience of hurtling toward death as we, paradoxically, triumph over that same death every day we’re alive.

Confessions Of A Techno User

We Are the Future

Tell Us The Reason!

Get Lost, You Fat Fattie!

RSS Feed
Jowita Bydlowska was born in Warsaw, as in Poland. She moved to Canada as a teenager. That hurt. She got over it eventually and now she likes it in Canada. She's the author of "Drunk Mom," a memoir, "Guy," a novel, and "Possessed," also a novel. For fun she takes weird pictures, usually of herself, because she and herself are on the same page most of the time so it's just easier that way. More from Jowita Bydlowska here.