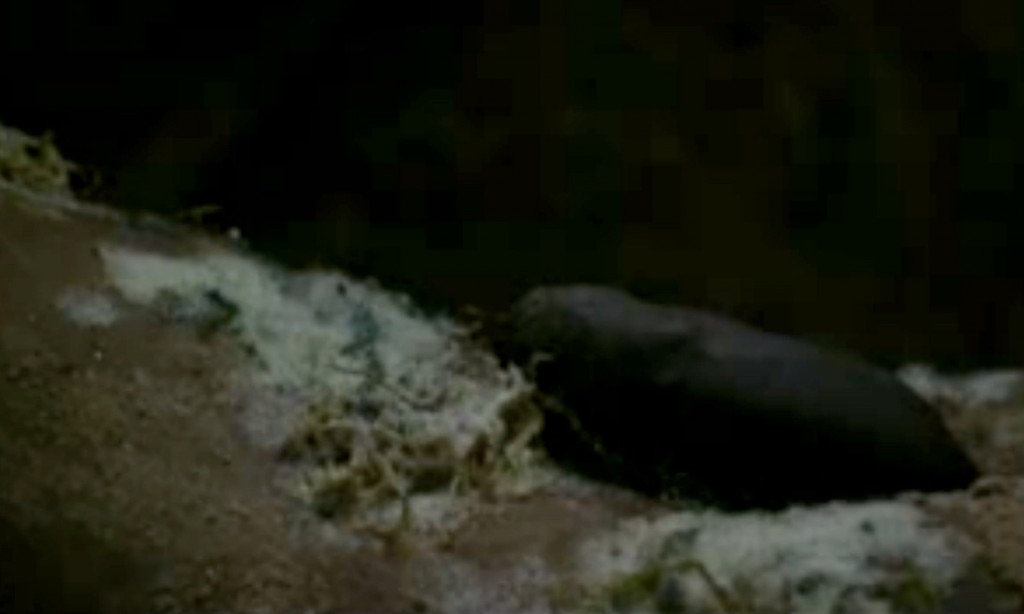 On first viewing it took me half a minute to figure out what exactly is happening in this video. Yes, those are Matthew Barney’s genitals rubbing against what seems to be a giant spindle covered in petroleum jelly (9:00 onwards). A dirty root vegetable protrudes from his anus as he flexes his body back and forth. He works himself up to orgasm.

In his 1996 film “Crash,” based on JG Ballard’s novel of the same title, David Cronenberg takes the image of metal and technology crashing into flesh (and its relationship to orgasm) to an extreme.

Here the metal and technological imprints on James Spader’s body become his conduit to human contact. When Elias Koteas slowly peels back the bandage to reveal the burned-in brand of an automobile hood ornament, he is immediately aroused. He licks Spader’s scar. Spader pulls Koteas up, physically demanding that Koteas look him in the face. Unlike Barney and the models in buttmachineboys, Spader seems to desire acknowledgement that he’s a human being, not simply branded flesh.

The lyrics of Joni Mitchell’s famous song tell us the festival was about a return to “the garden,” a return to something peaceful, organic and humane — flesh against flesh, body against body, hippies careening into each other through cornfields, mud and water. But also present were super 8 cameras, VW vans and most famously Jimi Hendrix’s electric guitar and amp. Even in the organic garden of 1969 technology and electricity had made their mark.

I vaguely remember the feeble attempt to stage Woodstock 30 years after the original, when I was a teenager in 1999. As with many things my generation has attempted to re-create, the 1999 festival was a waste. Absent of any purpose, the festival was simply a big-business venture to capitalize on the teen music market.

Even the bands themselves seemed to recognize it. “Put your middle fingers up in the air!” yells Fred Durst to the crowd as he sings about counterfeit culture. “This goes out to the whole world that’s at home watching this shit.”

Mitchell’s organic garden has become a concrete jungle. “Reality bites but that’s what life is,” Durst raps. “Because you’re sick of yourself/well I’m sick of you too, fake.” The only way to allow reality is to embrace the fake.

Perhaps the way to free ourselves from the machine is to become the machine. Not just branded or scarred, but wholly incorporated into the plastic and metal that otherwise can feel so binding. Maybe if we just submit, all can be full of love, even for us fucking machines.

RSS Feed
Markus Kirschner is a filmmaker and production designer. He wrote and directed the short film "Communion." Other credits include production design on the 2012 documentary "Mea Maxima Culpa: Silence In The House Of God," and on the Sundance 2010 selection, "3 Backyards," starring Edie Falco, Elias Koteas and Embeth Davidtz. He holds a B.A. from Bard College and an M.F.A. from Columbia University, New York. More Markus Kirschner here.