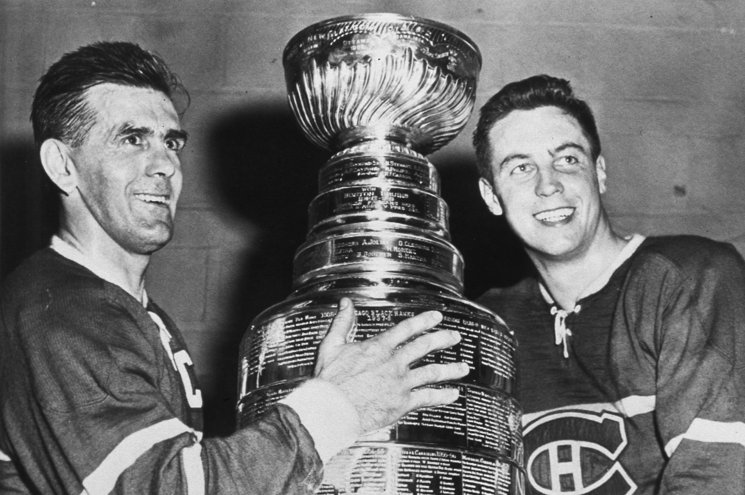 The winning days of Maurice Richard are a distant memory, but every year offers another chance to win the cup. In May, 2010 it seemed les Canadiens of old had been raised from the dead. Having barely made it into the NHL Playoffs, they vanquished the Washington Capitals (league leaders) and the Pittsburgh Penguins (Stanley Cup holders) before falling in the Eastern Conference Finals to the Philadelphia Flyers (who in turn lost in the Stanley Cup Finals to the Chicago Blackhawks). While the Habs’ astonishing run lasted, Montrealers enjoyed near-hysterical celebrations. 2014 was a carbon copy: they beat the Lightning in a straight sweep, squeezed out a victory in game 7 against the Boston Bruins, and finally went down to the New York Rangers in the Eastern Conference Finals.
Ah well. Merde.

Whenever the Habs are playing well, Ryeberg remembers Sheldon Cohen’s sweet little film, “The Sweater” — based on Roch Carrier‘s short story. Every Canadian kid born in the last forty years or so, French or English, knows this film.

The Canadian five-dollar banknote used to feature the following Roch Carrier quotation (in French, then translated into English): “The winters of my childhood were long, long seasons. We lived in three places — the school, the church and the skating-rink — but our real life was on the skating rink.”

The banknote was redesigned in 2011 when the Canadian mint switched to polymer banknotes, and the winter scene with the Roch Carrier quote was replaced by an astronaut floating next to the Canadarm. Big sigh.

In the wintry parts of Canada, the end of the hockey playoffs marks the beginning of spring. You trade your ice skates for roller skates and glide the streets, though with only a fraction of the grace and dexterity of Gene Kelly.

“She likes me so I like myself.” Ah! So simple, straightforward, reassuring. Not the case with Jesper Just. He is more: “He and it and they like me so I can’t like her.”

4) If Her Face Is Not Good, That’s Discouraging

OK, so it’s spring. You’re a guy living in 1967. How to choose your “something to love”? First thing, says Woody Allen, unabashedly, on Canadian national television, is avoid the ten and twenty-footers.

What next? Whatever you do, say “I love you” before it’s too late, or succumb — the way this fellow succumbs to an ardent 27 year-old Germaine Greer.

Yes, love is a mortally dangerous game. The safest policy is to set low expectations?

When the melancholy hits, how to deal? Wander the streets in the rain with your dog.

8) Before, During, After: I’m An Emotional Wreck

9) There Is Light Somewhere

Hey, what better cure for amorous agonies than a little uplifting poetry?

10) Even Among The Lower Forms of Life

Say no to dank submission! The Gods will offer you chances. Even mold finds love.