Presented on stage by Craig Davidson at Ryeberg Live Banff 2013. 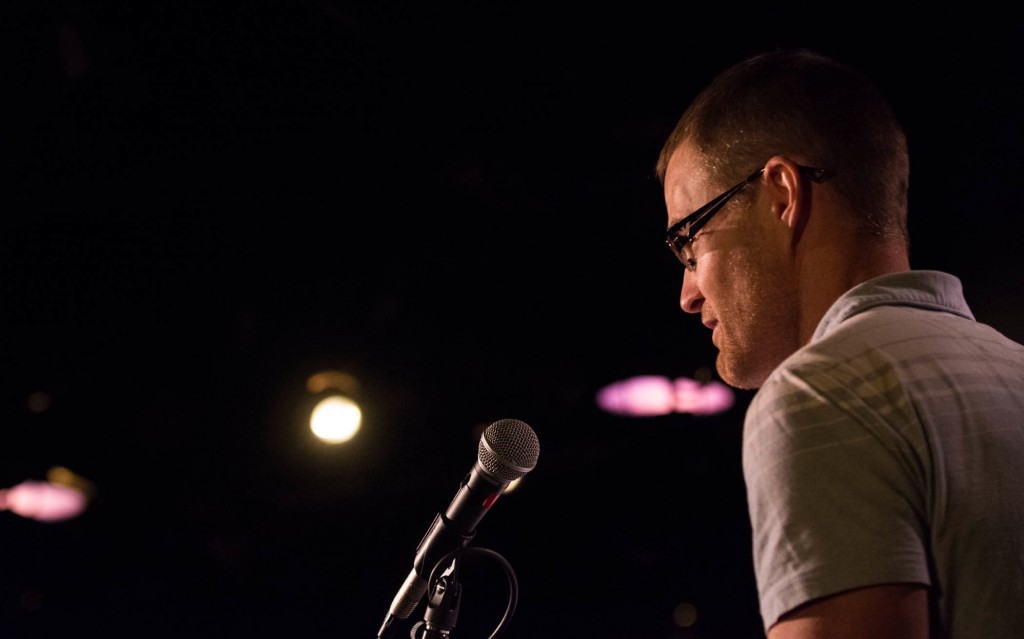 Are you familiar with the Wormhole? Have you ever hurled yourself down it?

The Wormhole is this free-associative Internet roaming jag where Point A leads circuitously to Point B, which meanders to Point C before rocketing to Point D, doglegging back to B and then skipping several letters to arrive at Point Q, maybe, which is indeed a strange place to find oneself.

We’ve all fallen down one, haven’t we? Tell me we have. Salve me.

We open our browsers and surf to a search engine, either with a specific mandate — search cue: Greg Ostertag, Utah Jazz Center, 1997-98 stats — or a more nebulous query: Funny Lolcats. From there, the Internet makes its plaything of us — appealing to our natural curiosity, a pair of hands pushing relentlessly at our backs, dripping honeyed whispers into our ears, offering up a dizzying variety of insidious “what if” scenarios (though they essentially boil down to: what if I click on this?). You can get baited down some very dark roads.

The Wormhole. A dare to yourself: How far down do I go? But this is the Internet — the hole has no bottom.

To forensically break down one’s own wormhole experience is to illustrate how an innocuous info-browsing session can devolve, through a combination of random opportunity and one’s own private proclivities, into a soul-curdling hellscape. To do so publically is to put all the twitchy-crawly bits of one’s psyche on full display.

First step: music. I prefer to set my self-inflicted public excoriations to music.

I often listen to music while writing: low-key, instrumental type stuff with rousing crescendos. Explosions in the Sky is a great for this. Say, “Postcard From 1952.”

With the soundtrack taken care of, I set to gathering information.

Candy. A recent search. How much more inoffensive can you get? I was writing this book set in the 80’s. As I get older, I find I want to go back to those simpler times.

At this point I’m feeling dandy (like sour candy). Wrapped in a comfy macramé poncho of nostalgia. The memory hole opens and I pour myself through, situating myself in a time when life was less demanding and seemed to make more sense than it does today.

I fall down the memory hole, which is intimately linked to the Wormhole, and—

I remember this. My childhood friend, Kevin Harley (together we were Harley-Davidson) came home from a trip to Texas with a whole case of the stuff. He claimed it was waaaay better than the junk you could buy at Mac’s Milk or Becker’s, shelved beside the bottles of Tab and Apple Slice and Jolt Cola. Sweeter and tastier than the swill we were forced to drink in Canada — made with real sugar, as Kevin claimed, as opposed to… what?, I’d wondered. Had I been eating fake sugar all my life? Vile imposter sugar, while the happy children in Mexico got the real deal?

We split a bottle, once, behind the utility shed. It was bathwater-warm — Kevin had hoarded it all day, the way kids do, past the point of optimum consumption. It’s the same reason I used to keep gummy bears in my pocket all day, doling them out like hoarded gold, until they were all warm and soft and stuck with pocket lint.

Warm or not, the Coke was lovely. Remembering it, I drifted aimlessly back to YouTube…

Up pops plenty of click-bait. Try this for a start.

Lord, that’s inane. YouTube is chockablock with people like this. Just wandering around, disseminating the useless ephemera of their existence — sorry, that’s harsh, but have something to say, people! I quickly lost interest and scanned the sidebar, where similarly-themed videos were listed.

I watched: “Blind Taste Test: Coke VS Mexican Coke: Albino Rhino Non Alcoholic Review.” This is a 7-minute video that I’ve shortened to about a minute.

Three or four people sitting in a basement drinking Coke out of Dixie cups, presided over by the aforementioned Albino Rhino: copiously-bearded, chalk-pale.

Skip to “Checked Out Another Mexican Pastry Shop — Iguala, Mexico.”

Suuuuh-weeeet! The original video is 4 minutes of mouthwatering delectables. I flip back to the other window, restart the song. Watch a few more pastry videos. It’s like guerilla Food Network.

What the hell was I here for in the first place? My information-gathering jag had spun off the rails. I decided to go with it. See where the information superhighway would take me.

I closed a few windows, got back to my start-point. I see: “Secret Compartments: Cocaine Smugglers Get Sophisticated.”

How did that end up on the sidebar, as a possible choice? I considered my search query: Mexican Coke. Okay, I could see how that might…

Why not? Take a little looksee. What’s the harm?

At a certain point a strange torpor sets in. Cottonmouthed, my head filled with cotton batten, the marrow of my bones replaced with lead. The sky shades to darkness out my window but I barely register the change. The Wormhole opens up, a great sucking maw pulling me down.

I watch it. It’s not so bad. Here’s the Coles Notes: In Yucutan, Mexico, a hard-hatted workman snaps the lock on a shipping container. Next shot: sharks. The entire container, the size of a railway box car, filled with dead sharks. Not Jaws — these are smaller, lemontips or whitetails. Next shot: a shark cut open on the bare cement, its guts filled with raw cocaine. It’s strange, depressing and somehow alien to contemplate; it’s difficult to convince myself that this actually happened. Cocaine in sharks? It’s not unbelievable, it’s simply that I’d rather not believe.

The Wormhole opens. The sidebar is getting very weird indeed. My options include:

“Stingray Leaps From Water, Killing Woman.”
“How to Make a Brick of Cocaine.”
“Charlie Chaplin on Cocaine.”

Do I click on it? Yeah, I do. Am I proud of that fact? Not at all. Should I be surprised to see that the clip has garnered nearly 13 million views — more than, say, any Bon Iver song?

Does it show a kid getting his head taken off? Thankfully, no. It’s just a news report with stock footage sent in from Six Flags. A monotone newscaster voice informs viewers that the kid leapt two six-foot fences in order to retrieve his hat.

I’m in deeper waters now. The door slams shut behind me, trapping me in the dark with my dirty predilections.

But my mind’s flowing with a darker current. The Wormhole’s got a hold on me.

Who am I kidding? I flung myself headlong into the fucking thing.

It comes to this:

It was just sitting there, innocuous yet somehow toadlike, on the sidebar. The static shot is chilling. Two men in blue jeans, shirtless, their hands bound, slumped against a pitted brick wall. One of them rail-thin, the other pale and buttery. The thin man looks befuddled — Is this actually happening? — his handsome face tilted slightly upwards, as if trying to assay the time of day by the position of the sun. The heavier man is slumped to one side at an uncomfortable angle, his head pressed back to the wall but cocked to the left—where his executioner stands. Combat fatigues and a chainsaw: that’s all you can really make out of the third figure. Fatigues, chainsaw, and intent.

These are the Zetas. A bloodhungry Mexican cartel. I know about the Zetas. Which again begs the question — why is my finger twitching on the mouse? How did I get here?

I’m a good Canadian kid, as Don Cherry might say. I trained hard, prayed and ate my vitamins, as Hulk Hogan counseled. I was raised well. My parents are good people. They didn’t raise me to do this.

There are possibilities in life that put a question to you: will you step through this door? What does it say about you if you do? I don’t want to make too big a thing of this, because hell, it’s just a few minutes of grainy video footage. Right? Christ, who gives a shit?

But does it change you? A few minutes? Ask yourself this. I mean, really frame that question in your mind. Point A to B to C to Y — to somewhere you never expected to be… but it’s where you brought yourself, isn’t it? Methodically, scrupulously, brought yourself. I just wanted to look for candy.

I wanted to feel that childhood safety and calmness — which may never have existed, but now, an adult, more than ever I so dearly want to believe it did.

The Wormhole is a doorway. At some point you have to ask: why in God’s name are you stepping through this fucking door?

RSS Feed
Craig was born in Toronto and grew up in the bordertown of St. Catharines, Ontario, near Niagara Falls. His books include “Rust and Bone” (which was made into a major feature film of the same name), “The Fighter” and “Sarah Court.” His novel “Cataract City” was shortlisted for the 2013 Giller Prize. He also writes horror-thrillers under a pseudonym. He is a graduate of the Iowa Writers’ Workshop, and his journalism and articles have been published in the Globe and Mail, Esquire, GQ, The Walrus, Agni, and the Washington Post, among others. He lives in Toronto with his partner and child. More Craig Davidson, here.