Whenever I hear about a new song or performer and want to get a taste, I go to YouTube. When I want to see Betty White’s SNL opening monologue, or find some vintage Muppets episodes for my kids, I go to YouTube. It is our 24-hour living video library, a free-for-all of the absurd, the sublime and the notable.

But one thing that YouTube doesn’t do particularly well is dialogue. I have “liked” dozens of videos, from violin performances to political commentary, but I have almost never felt the need to add to the “Comments” sections, apart from a sick professorial compulsion to correct spelling and grammar. This is largely because most of the comments aren’t conversations at all. Many are fan-posts (“LOL!!”), with the occasional mean-spirited critique/graffito sprinkled in (“This is the stupidest post I have ever seen.”).

Kuitman’s fabulous ThruYOU project is the exception that proves the rule here – it takes Kuitman’s tremendous technical virtuosity to make his disparate, often lonely musicians speak to each other.

One occasionally gets the semblance of a debate by posting controversial video, or a familiar clip about a controversial subject. Search “Abortion” and you’ll see what I mean. But because most of these posts originate as propaganda for one side or another, the response tends to be similarly propagandistic, and contains more comments along the lines of “Fuck you, you self-righteous cunt” than meaningful dialogue.

This is partially true for the version of Steve Earle’s song “John Walker’s Blues” that MBJorkman uploaded here with accompanying images of John Walker Lindh.

If you don’t know the story, John Walker Lindh is the suburban American (raised in Marin County, California) who converted to Islam as a teenager (supported by well-meaning, divorced parents), and later fought with the Taliban in Afghanistan.

He is currently serving a 20-year sentence for his role in the so called “prison uprising” during which the CIA officer Mike Spann was killed. See, if you like, the CBS interview with his parents, who are trying to get his sentence reduced:

Lindh represented, at the time, a bizarre and terrifying possibility – that a normal, if troubled, suburban boy would become one of them. Remember this was in late 2001, very soon after the attacks on the Twin Towers, and during a time when most Americans felt pretty united on who the bad guys were. If a kid from Marin County could get swept up in violent fundamentalist Islam – well, then, we really are under attack.

In the wake of this strange time, Steve Earle included the song “John Walker’s Blues” on his album “Jerusalem,” which came out in 2002.

Earle is, in my opinion, one of our very best singer-songwriters, not least because he is willing to be ugly in his songwriting. “John Walker’s Blues” is an attempt to understand how “just an American boy, raised on MTV” could become a jihadist.

From the very beginning, then, Earle was looking for the more complicated answer than the one being offered in public discourse: Not “how do we stop them?!,” but “how do they become who they are?” It’s a question that only the more informed (and often politically isolated) academic critics were asking in the early months after the 2001 attacks.

The song’s struggle to get inside Walker Lindh’s head is ultimately incomplete and unsatisfying: “So I started looking around, for a light out of the dim, and the first thing I heard that made sense was the word of Mohammed, peace be upon him.” Why Mohammed and not Herbert Marcuse? Or John Caputo? Or Naomi Klein?

But if we don’t ultimately understand Walker Lindh’s path, we can certainly sympathize with his frustrations, as Earle portrays them. And the mix of discourses is masterful: Religious terminology blends seamlessly in with the remnants of Lindh’s American pop-culture upbringing: “He don’t understand that sometimes a man’s got to fight for what he believes” is an almost verbatim cop from Kenny Rogers’s 1979 hit “Coward of the County,” something we can imagine Lindh listening to in his childhood.

On my first hearing of ”John Walker’s Blues,” I found myself curious to learn the religious context of “A shadu la ihala allah Allah,” and to understand the chanting of the muezzin clipped in at the end. In other words, the song makes me want to know more about a person, and a type of person, who was – especially in 2002 – subject to all sorts of over-simplifications. This is a great accomplishment for a 3 ½ minute pop tune.

MBjorkman’s upload of Earle’s song is accompanied by a progression of four photos. First, in a photo courtesy of the Lindh family, we see the recognizable teenage Lindh newly converted, as if in costume. Then, the more anonymous Lindh in a kefiyya headdress, posed with a blank red background suggestive of the photos of other radical jihadists who expect to be martyred. Then the ubiquitous CNN photo of a wounded Lindh on a stretcher, with blast marks on his face and a horrible blankness in his eyes that is the common stare of all shell-shocked soldiers. 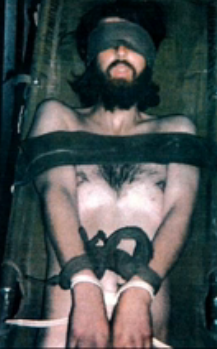 The last image, taken by military personnel, of Lindh about to be transported back to the US, strapped down, naked, and blindfolded, makes me angry all over again, though I’m no longer sure at whom. What I do know is that Steve Earle’s raw guitar is my anger’s voice and its music.

But I started this wanting to talk about dialogue. Today, MBjorkman’s upload has had over 80,000 views, and nearly 400 comments. Many are of the typical cartoonishly reactionary American type, like chord972’s: “This is one stupid video; no more checking out steve earle’s music for this listener. John Walker? hope he rots.” (The professor in me wonders at the grammar here – correct usage of the semi colon but erratic capitalization – why?) But there are also a few that seem to side with jihad, like MiketheMuslim’s comment: “Allahu Akbar. Victory is through Him alone.”

Others have been removed by the YouTube administrators, perhaps for abusive language, or perhaps for incitement to violence. The highest-rated comments are those that defend Earle’s songwriting, as from ediramaa: “For once i see ppl trying to understand the other side of the story it takes brave ppl like steve earle. If more ppl thought like that we wouldnt be in this shit we are now.”

What I love about this is the rawness of the dialogue, and the inclusion of voices from such disparate sides of the story.

These days, if you wish you can turn on Fox News or read the Huffington Post or follow blogs from any range of perspectives if you want some fuel for your political fire. Or you can tune into a staid news deliverer that attempts (imperfectly) to provide “objective analysis.” We all know that too many so-called debates are either sound-bite contests or overly-polite analyses that approach issues from a no-less-problematic emotional distance. Fire or ice. The “Comments” sections of news websites like the CBC or CNN are better, but they tend toward a certain narrow range of vocal registers – the debate is vigorous, but less refreshingly chaotic.

For some reason, MBjorkman’s upload has generated a kind of cross-disciplinary, multi-vocal debate on everything from religion, to American colonialism, to Steve Earle’s songwriting ability, to being a “hard man,” complete with gratuitous name-calling, familiar political truisms, and the occasional moment of insight.

As an expression of the persistent pain of the wounds that John Walker Lindh, and Steve Earle’s song, represent, there’s something loud and unruly and real about it. It’s a rare case when YouTube becomes not just about public access, but about public discourse.

Nothing Covered Up – Part 2