Presented on stage by Joanna Kavenna at Ryeberg Live Banff 2013. 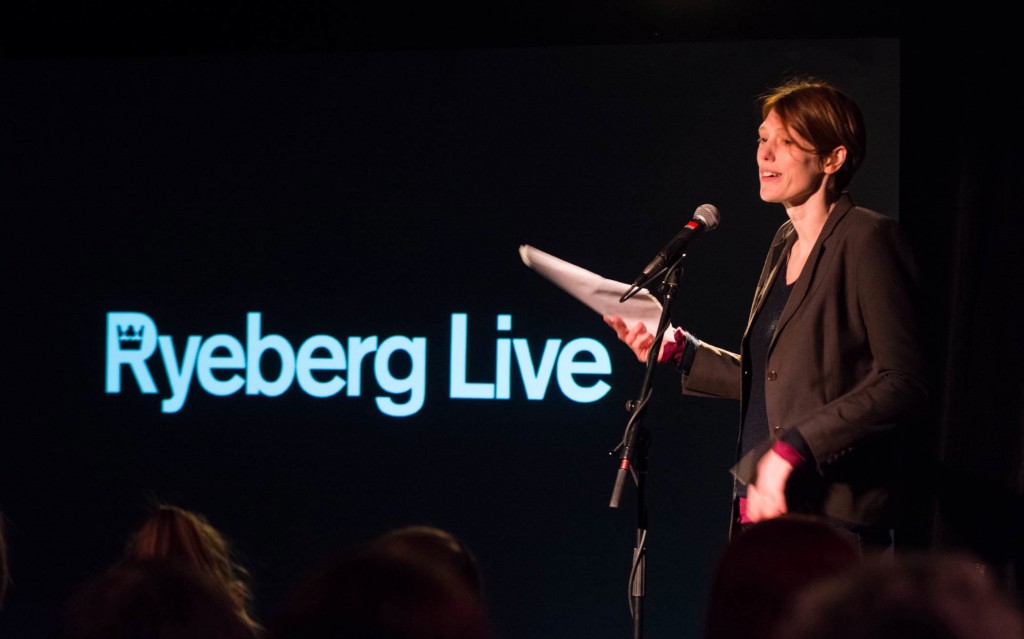 I’d like you to watch these two clips and consider what might link them to each other and also to Socrates, Jesus, and Laurie Anderson.

David Fincher, “Only After We’ve Lost Everything” (Fight Club, 1999)

Both are buddy movies, both chart the accession from drab ordinary life and routine to apotheotic violence. But, most importantly, to me, both are contemporary variations on an ancient archetypal relationship which I roughly define as my friend the fabulous freak.

This is an apostolic tradition, ie., it involves the Sage and his (or her) amanuensis, scribe, interpreter. Guru and supplicant. Tutor and disciple, know-it-all and wide-eyed ingenue, pontificating madman, or woman, and annotator in the margins. It is an ancient form of
codependence: the sage/genius/fabulous freak needs the sidekick/interpreter, as much as the sidekick interpreter needs the fabulous freak.

The apostolic love-in is alive and well in the classical world — Socrates (the fabulous freak) and Plato (sidekick interpreter). In the Old Testament — God and Moses, David and Goliath. In the origins of Christianity — Jesus and his disciples, a veritable gang of interpreter-sidekicks. It proceeds into the annals of Art and Song, where everyone is vying to be the fabulous freak and no one really wants to be the sidekick. William Wordsworth and Samuel Coleridge fight it out through a series of collaborations and arguments, until Coleridge takes himself out with opium. Bryon and Shelley fight it out through a series of luxury European holidays, until Shelley goes on a disastrous boating trip off the coast of Italy.

Meanwhile Mary Shelley quietly writes “Frankenstein,” or, “The birth and trials of a most reviled and unfortunate and yet in many senses Fabulous Freak.”

We lack YouTube records of these sorts of ambivalent artistic encounters in the classical world, Renaissance (Shakespeare and Ben Jonson?), Romantic era, but I think they might have been a bit like this half-amicable, half-uneasy meeting between two career fabulous freaks, Andy Warhol and Joseph Beuys.

Warhol’s major aesthetic-philosophical point is that everyone can be a fabulous freak, albeit briefly. Performance artists such as Beuys and Laurie Anderson mock the role of freak and sage, even as they adopt it.

In 1965, Beuys, wearing honey and gold leaf, explained pictures to a dead hare. The disciple was alas unable to understand a word his guru was saying being (a) a hare and (b) dead. Nonetheless, the freak opined. The hare was associated in the classical tradition with fertility, reincarnation, resurrection. Gold represents the sun, wisdom. Honey indicates rebirth. For Beuys the great fertile revitalising force is the imagination.

The ambivalent, complicated mutual dependency and fascination of the freak and interpreter, guru and aspirant, are memorialised further in 20th century literature and film, into “Brideshead Revisited,” “The Great Gatsby,” “Withnail & I,” “Fight Club,” “Thelma & Louise,” “Dogville,” “Fried Green Tomatoes at the Whistle Stop Cafe” and so on.

In “Brideshead” and “The Great Gatsby” fabulous freaks Sebastian Flyte and Jay Gatsby are noteworthy figures even in a milieu where everyone is striving to be noteworthy, and able to summon instant theatre (the motorcar, the country mansion, elaborate picnics and parties)… They are observed by less confident, less compelling sidekick types. Thus enter Nick Carraway.

The relationship also drives the British cult classic, “Withnail & I.” Again, the pencil-sketched narrator and the freak, Withnail. Withnail and the nameless ‘I’ are jobless actors, on the cusp of 30. Withnail is compelling, hysterical, hilarious, he derives from the privileged classes, like Flyte, he is au fait with all the rules he shatters. The film is also partly about suppressed or not remotely suppressed homoeroticism, like “Fried Green Tomatoes,” like “Brideshead.”

Chuck Palahniuk‘s “Fight Club” presents an intriguing variation on the relationship. Throughout the whole book, you assume you are in the company of another pallid narrator, being inducted into the ways of vibrancy and dissolution by the classic freak. Tyler Durden looks like one more charismatic renegade, with his ‘fight club’ rules and his inveterate and even psychotic soap making, and eventually his experiments in guerrilla warfare and the rest. Yet, in the end, we discover this pas de deux is really a pas d’un…

Durden is the schizophrenic other of the narrator, who has engaged so fully with ordinary life that it has sent him over the edge. So the poles of fabulous freak and nervous observer may also, Palahniuk suggests, lie within the divided self.

In “Thelma & Louise,” a feminist re-telling of various traditionally male-dominated genres, from the western to the buddy movie and also, I argue, the story of the fabulous freak, the apostolic role shifts from one woman to another. We begin with Louise as the dominant character, she casts them both out by shooting the aspirant rapist, or effectively they are both cast out by the culture of sexism and violence against women he signals, but often they operate simultaneously against the unfabulous array of slobs and sexists.

In “Thelma & Louise,” the ending also suggests that for these fabulous freaks, reality can supply no home.

But it’s not only the female freaks who suffer. Flyte and Gatsby are dragged into the mire, gradually murkiness overwhelms them, they lose their lustre, the freak becomes less freakish than pitiable and finally quite commonplace.

In “Fight Club,” the fabulous freakish self is blown away — quite literally — so the less scintillating self can stand alone.

The unexceptional, mild-mannered, hesitant and unfabulous narrators — Ryder, Carraway, the ‘I’ of “Withnail & I” — keep staggering along, they compromise and continue, commemorating the long-gone, the freaks.

So the fabulous cannot survive in the world of savage reality, there is no place for the freak, beyond the unreal eden of youth, beyond the saturnalia, the conjured fantasy. The dance of archetypes, faithful and distorted, stages a process that we all go through, to varying degrees — the discovery that life is not a perfect party, or a glorious sunlit meadow, that life smacks you hard, then waits until you lift your head again, and smacks you harder still. So the ‘my friend the freak’ genre is more than mere freak play, it is about harsh compromise, the suppression of the foolish beautiful self, and how dour relentless society with all its petty maxims incites, bullies, the individual until they conform and dissolve into the crowd.

Yet, the fabulous freak stands alone, for as long as they can stand at all, refuses, makes themselves an example, forces an event, an anomaly, turns their own life into a work of art, suffers the consequences. However precarious they are, however doomed, for however short a time, the freak refuses to succumb to tedious hierarchies of meaning and conventions that stymy the individual. They insist on their own uniqueness, their own path through life — they resist…

While most of us conform and survive, they enact the repressed fantasies of the social being, the responsible citizen, they light the touch paper and watch REALITY go BOOM…. They FREAK OUT.

Even unto the abyss, the desert –

Even unto the drunken soliloquy, or despair –

For the road of the freak is the uncharted territory, the rocky path, through the great wilds of human life.

RSS Feed
Joanna Kavenna is the author of three novels, "Come To The Edge," "The Birth of Love," and “Inglorious,” winner of the 2008 Orange Prize for New Writers. Her first book, “The Ice Museum: In Search of the Lost Land of Thule” was an account of a poetic tour through northern lands. Kavenna writes for the London Review of Books, the Guardian and Observer, the Times Literary Supplement, the International Herald Tribune,Spectator Magazine and the Telegraph. More Joanna Kavenna here.