A little girl is given her cape, a red one, as well as her identity—she is the Little Red Riding Hood. At the same time, she is given a task and an admonition: Deliver the custards to grandmother but do not stop to talk to strangers.

Nothing is stranger than a talking wolf, but still the Little Red Riding Hood has no trouble communicating with it.

I wonder whether it was that the wolf spoke her language in the manner we have come to expect of fairytales, or whether there might be an ancient idea of interspecies communication that has been simplified ambiguously into ‘the wolf spoke,’ or ‘the bird spoke.’ Can we speak with animals? And what does it mean to speak to animals?

If I say, “Sit,” to a dog, and it sits, and “Stay,” and it stays, the idea is that I have communicated and the creature has obeyed, and it is a good dog. Humans like to expect full obedience from dogs. In essence, this is because we are frightened by their teeth and in some cases disgusted by their wild ways. If we can control the ways of others, we feel safe; our dogs become cute, even adorable.

But when the animal sits or obeys or copies us it has also communicated something. It has graciously communicated that it will do your bidding in spite of our idea about its musculature, and in spite our anxiety about the potential of its fangs. The dog likely does not know that we are primordially afraid of it.

The Little Red Riding Hood tells the wolf exactly where she is heading and what her task comprises. The wolf takes a short cut to grandmother’s house. In Moscow, stray dogs have learned to take shortcuts everywhere. They seem to understand the cues given by the subway voice at each stop.

When I was little, I could fly and I could communicate with the animals. Primarily I spoke with insects—butterflies, ants and daddy longlegs were also forthcoming. As well, I had a rapport with: a cat named Marbles, various kittens, dogs, horses, calves and a pony. I never had to open my mouth when speaking with these animals.

If there was an animal problem, I was often sent in. If a kitten had climbed up the barn or a tree and was afraid to come down, if a dog had found its way into the public pool area, this was my job. I had the scratches and bite scars to prove it. I understood that animals talked with their bodies—their mouths and claws when scared—and this was acceptable to me.

I knew particular frogs and toads in the pond to which I was forbidden to visit. This place—through a magical cedar forest, where it was always dark, and where the fairies dwelled—was forbidden, so that I would dare to go to it. Why else make it forbidden?

There were other exceptional places on our farm. When I first walked its paths, my mother pointed out fairyland, where the trees bowed over to make an arch, and where mum told me, “If you go in here and you come out there, it will always be the same place,” and when I tried to foil the magic, I could not.

At the very back of the property, past the woods, the last meadow, the wild ditch, and the pussy willow field, and into the second forest, along the fence line, if you knew where to look, there was a magic rock. It was immense, and had moss and trees growing on it. 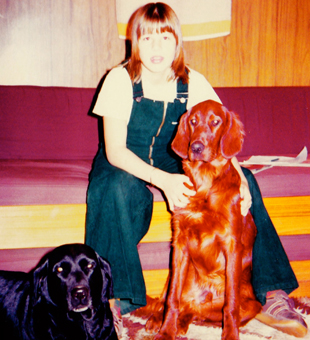 Also, in the basement of our house lived a velvety mole who visited me, and never anyone else. Everywhere there were animals and if you stood very still many of them would respond. For the first many years of my life, I might as well have lived inside a fairytale. It seems that way now.

The words ‘believe’ and ‘knew’ and ‘understood’ don’t work here very well. Let me say that there came a time when I realized that I might not actually be communicating with the animals, and that I was brought to consider that there were no such things as fairies, not even the tooth fairy, and this time was the beginning of doubt. I remember very clearly carrying this doubt outside with me one day and trying to fly with it and failing.

In the Roman Catholic faith when a person is coming of age, they take a new name, and in the school I attended the girls were encouraged to take the name Mary, and the boys Joseph. I somehow got special dispensation to rename myself Francis after the Saint best pictured surrounded by creatures. I already doubted my animal whispering saintliness but I still wanted to live in the delusion of possibility. I wanted to believe a lot of things but wanting to believe is not the same as believing. It lacks the particular heartful recognition. Even now, I carry with me the palpable recognition of how undermining a thing is doubt. Doubt wedged then right in between all the things I was and all the things I became.

Red Riding Hood doesn’t see that the wolf has disguised himself as grandmother, and is tucked up, all hairy and toothy in her bed.

In the many and varied interpretations of The Little Red Riding Hood to be found on YouTube, the girl is not so little; she has come of an age where speaking to the animals 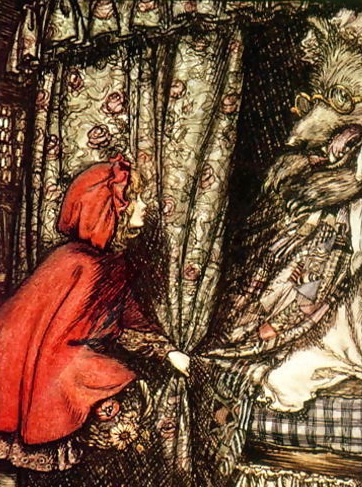 is no longer considered civilized, and, of course the red cape has been suggested as signifying menses onset.

“Oh my, what big teeth you have,” said The Little Red Riding Hood.

“All the better to eat you with, my dear!”

I’ve always thought Red Riding Hood simple for not recognizing the wolf. No one would mistake a wolf for a grandmother. But now I start to see something: she’s gone outside civility. She speaks to a wolf. It’s the wolf’s wildness she doesn’t recognize, because for her, still able to communicate with him, she doesn’t see the danger until the moment that she notices the grotesque tearing fangs. She doesn’t notice until she is scared. What if she had not become afraid?

According to Wikipedia, Oxana Malaya lives on a farm for mentally handicapped children, where she does chores with the cows, even though ‘she is happiest when among dogs.’