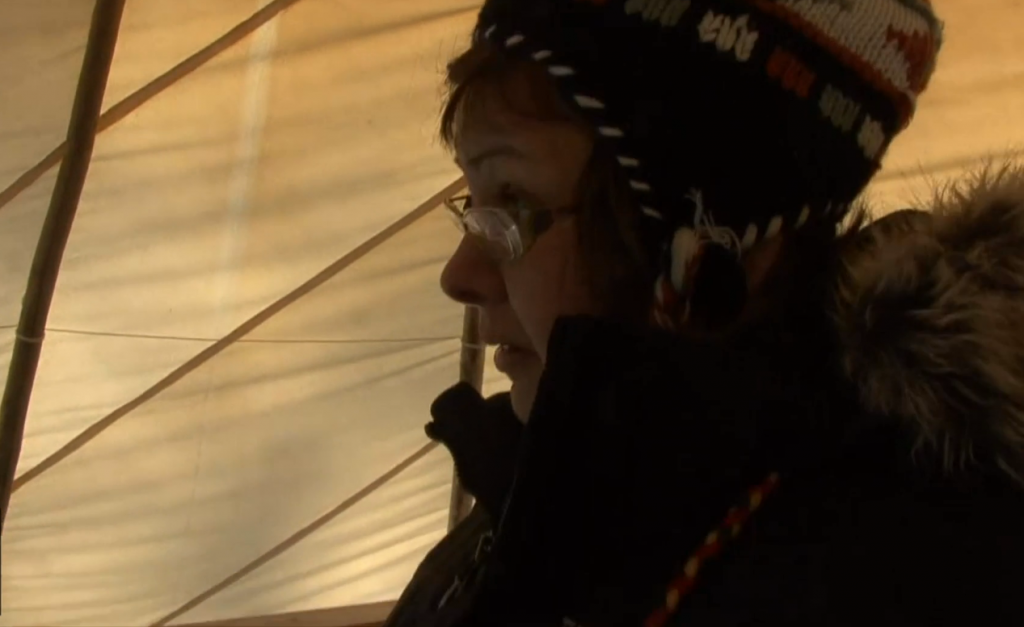 On 11 December 2012, Theresa Spence, mother of five and Chief of the Attawapiskat First Nation of Canada, declared a hunger strike. This was partly in response to the Canadian government’s Bill C-45. It’s a new budget bill that includes changes to the Canadian Indian Act, changes that will weaken the ability of First Nations people to manage and protect their own Reserve lands. The bill also strikes thousands of lakes and streams from the list of federally protected bodies of water.

Theresa Spence’s hunger strike has brought attention to a whole range of other First Nations issues, and she’s quickly become a symbolic leader for the grassroots Idle No More Movement. Her principal demand is that Canadian Prime Minister, Stephen Harper, come to her teepee on Victoria Island — not far from the Parliament Buildings in Ottawa — and speak to her; she hopes this will bring about a “nation to nation” meeting between the Federal Government and the First Nations leadership, to foster a process where they can talk about sharing land and resources fairly. She says she is willing to die for her people.

In a long essay entitled “The Animal That Therefore I Am,” Jacques Derrida describes the moment he found himself standing naked one morning in his bathroom, and feeling ashamed when faced by his cat. He wonders about his shame before his cat’s gaze, and begins to probe the word and meaning of the word “Animal.” Derrida speaks of the word as a dangerous enclosure because it wants to hold all animals within it – because (as a general singular) it positions the staggering diversity of living creatures as one uniform category, and by doing this, it also positions man above animal. Derrida argues that man has enclosed animal inside a word, a global and non-particularizing one that seeks by that enclosure to subjugate, for man’s own use and abuse, animals. To say “animal” is a very violent gesture. Derrida makes a stunning parallel between species and human annihilation/genocide.

“It gets more complicated: the annihilation of certain species is indeed in process, but it is occurring through the organization and exploitation of an artificial, infernal, virtually interminable survival, in conditions that previous generations would have judged monstrous, outside of every presumed norm of life proper to animals that are thus exterminated by means of their continued existence or even their overpopulation. As if, for example, instead of throwing people into ovens and gas chambers (let’s say Nazi) doctors and geneticists had decided to organize the overproduction and overgeneration of Jews, gypsies, and homosexuals by means of artificial insemination, so that, being continually more numerous and better fed, they could be destined in always increasing numbers for the same hell, that of the imposition of genetic experimentation, or extermination by gas or fire. In the same abattoirs.”

He is speaking of factory/industrial farms and slaughterhouses, of course, but the extrapolation to the Nazi enclosures is remarkable. It’s interesting to know, too, that Hitler found his inspiration for concentration camps from reading about American Indian reservations in Karl May’s greatly popular Western novels.

Reserves, too, are enclosures, a way to keep a people separate from another people – a very strange idea, if you think about it for even one second. And especially strange if you think that in Canada, because of the Indian Act, it is the colonial power that has enclosed, like a species of human, those people — the indigenous people — who are, or should have been seen as, and treated as, the HOST people of this land. Canada has done this in a sneaky way — it has given indigenous people the appearance of sovereignty without the substance of it. In other words, we have treated people, by our complicity, as if they were animals. We have enclosed them inside physical borders away from us and also inside an idea of what they are (not us!). It makes no difference whether the enclosed people agreed to reserves since the terms of the agreement were not honoured by the guests. As Russell Diabo, First Nations policy analyst, says in the following video interview, it is as if the guest locked the host out of the house.

Prime Minister Harper, Diabo says, is carrying out a “First Nations termination plan” by practicing a results-based approach in negotiations with aboriginal peoples; his government is effectively forcing First Nations to give up pre-existing sovereign status through unilateral policies on land claims and self-government. These policies, he says, are difficult to fight since they require lengthy and expensive legal battles, something the people cannot afford and don’t necessarily always have the expertise to fight. Diabo believes these policies aim to assimilate First Nations territories into the existing federal and provincial orders, turning them into municipalities within the Canadian Confederation.

It occurred to me that Theresa Spence is Derrida’s cat in the sense that, in calling Stephen Harper’s bluff, she is asking for a return gaze, for Stephen Harper to recognize that she is not a general singular “Animal” but a particular singular “Person” who requires a face-to-face meeting. She is demanding more than a simple meeting. She is demanding recognition symbolically for all enclosed peoples –- she is asking Stephen Harper to see her and recognize her as a human being.

She is also, by extension, pointing out a deep abiding racism — a racism that is genocidal. She is saying that Stephen Harper (and by extrapolation, Canada) is killing Indigenous peoples by this system of enclosure (this experiment) and that she is willing to die as the one (particular) so that the many particulars (the many human beings who are both oppressed and historically oppressed) will have her as a meaningful token going forward.

She will become, and has already become, a martyr. And she has done this by pointing out to us that her hunger should be our hunger, that we haven’t enclosed everyone, that Theresa Spence is just one of many who has not been defeated by the experiment of reserves, Residential schools — of enclosure. The biggest problem in this strategy is that she is dealing with a Prime Minister who doesn’t feel shame. But many of us do, and we need to feel it more deeply. The more deeply we feel that naked shame in the face of Theresa Spence’s call to recognition, the more the enclosure ruptures and the more human we all become.