Monster Under The Bath Mat

Question: What is the opposite of human? Answer.

Scutigera coleoptrata, the common house centipede, haunts my apartment like a vengeful ghost. I go cold and my skin pricks up when one of them appears in my peripheral vision. If I see one darting out from under my wardrobe late at night, I’ll scream and scream until I’ve sprayed it to death with the Mr. Clean bottle I keep nearby for that purpose. As a result I have a Pavlovian aversion to the smell of Mr. Clean.

I don’t want to kill them, so I try banging the floor to make them run in the opposite direction. But they never run where I want them to; in fact, most of the time they run toward the banging. Dodging them can be dangerous: once I knocked over a lit lamp which nearly broke against the floor. The centipede made it onto my mattress. I bashed it to death with the butt of the lamp and stood quivering for half an hour before I summoned the courage to dispose of its body.

They are found all over the world. Some of them are unnaturally big and all of them are alarmingly fast. I don’t know anyone who doesn’t at least get the willies watching one shoot across the wall.

But we ought to leave them be. First and foremost, killing bugs that pose us no harm is downright nasty, and house centipedes aren’t dangerous: their fangs are rarely strong enough to break human skin. They look like big danger, and they are, but only to little things.

Second, they eat bad bugs–including bedbugs and roaches, which are less frightening than centipedes but more hateful. If various sketchy Internet sources are to be believed, the Japanese introduce them into their homes as a pest control measure. And judging by this clip, Japanese house centipedes are twice as large as ours.

However, fearing the house centipede, which is both alien in appearance and Porsche-like in its mechanical efficiency, is a human reflex, and it takes more than knowledge to mitigate the fight or flight response. Sadly there are no anthropomorphic centipedes in Disney movies, and you don’t get to make a wish when you encounter one.

So I’ve been trying for the past year to conquer my coleoptrata phobia (a word I’ve yet to say out loud), recording my methods so that they may benefit other sufferers. YouTube has been invaluable.

Watch videos of centipedes doing human things, like self-grooming (which indicates self-consciousness!). And whenever you can, take a good look at their eyes. They’re just dots, but that’s one-half of a smiley face.

If you can’t help killing the big guys, spare the babies first. They’re fairly cute — they look like little eyelashes — so it’s easy to develop a fondness for them. Once this happens, you’ll start to see the larger ones as parents. No one wants to be an orphan maker.

A dying centipede is a pathetic sight. It scrambles and then squirms helplessly until it gives up the ghost. No matter how much centipedes scare you, it’s hard to do away with them without feeling lousy about it.

MugenGoon, “After Effects of a House Centipede Sprayed by Raid MAX” (2008)

Think Of Them As Bodyguards

Apartment living makes you vulnerable to many nimble enemies: roaches are barbarians that invade your living space and have sex in your walls; termites munch voraciously and, with each bite, increase your chances of dying under a pile of rubble; bedbugs will ruin your life and they’re nearly immortal.

But centipedes are on your side. Their raison d’etre is smiting, and they smite brutally: They lasso prey with their bodies and gobble them up.

Have you ever seen “Cloverfield?” It’s pretty good, but the ending is stupid because you actually see the monster and it’s just a dumb-looking CGI. Why didn’t the filmmakers enlarge a house centipede instead? They’re scarier-looking than any product of human artifice and they’re very easy to obtain.

Don’t just look at pictures; make one your desktop image. Watch videos habitually. Trap one in a jar and keep it for a few days as a pet. Name it. Watch it from every angle and visit it first thing when you get home from work. Release it humanely and muster a pang of regret when you do. 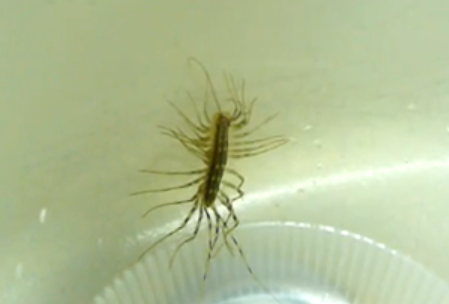 centipedelover, “My Pet Centipede Grooms Himself” (2009)

That you’re not dealing with these fuckers.

I Don’t Know What’s Good For Me

RSS Feed
Alexandra Molotkow is a writer and a senior editor at Real Life Magazine. She also publishes a newsletter/essay series called Crush Material. She was a founding editor at Hazlitt Magazine. She has also been an editor at the Hairpin and the Walrus, and an arts columnist at the Globe and Mail. For more Alexandra, go here.