Like a lot of people I was obsessed with my fair share of stars as a child. When I was six I saw “The Karate Kid” in Provincetown after a teenage girl coaxed me. She lived in the summer cottage next door, made necklaces, and talked about the movie non-stop for a week. She talked about Ralph Macchio. “But I hate karate movies,” I told her. “It’s not just about fighting,” she lustily insisted, “Ralph Macchio is gorrrrgeous.”

Persuaded, I asked my mom and dad to take me one night in July. The summer movie had been playing for weeks. We went to the two-screened theater wedged between Town Hall and what used to be Café Euro, a reggae-themed bar and restaurant in the center of town. “Bambi” was playing across the street in a theater behind a stained-glass shop. I dressed up for the occasion and we all walked down Commercial Street together. I was into denim and plaid and Converse that summer because it seemed cool and boyish to me. But I also carried a little purse that my mother picked up in Greece. It contained a plastic, see-through wallet full of stickers, movie stubs, and candy.

When Ralph Macchio (Daniel Larusso) first turns his face to the camera, almost four minutes have flashed by and he is sitting in a run-down station wagon after a grueling cross-country drive with his mother that begins in Newark, NJ and ends in Los Angeles, California.

Until then, Daniel is only a petulant acoustic, all “Maaa’s.” An accented teenage voice pitched against high vistas of American landscape. Arizona desert. Canyon. The kind in movies and postcards.

American movies in the 1980s often portrayed the struggle to be American (when the car breaks down during their cross-country move, Daniel’s mother’s urges Daniel to, “Push, push. Gimme all ya got, kid.”), which is the struggle to stay in the picture, specifically Daniel’s struggle to stay in this picture. At seventeen, he is world-weary and literally the movie’s sore subject; a soreness that is later reconfigured as physical suffering.

Though “The Karate Kid” isn’t technically about fame, it is, among other things, a frontier story and an acquisition story. A dream factory fable (“This is the garden of Eden,” Daniel’s mother rejoices) that comes directly from the way in which movies portray dreams (dreams we wouldn’t have were it not for the movies telling us what to dream) and the way those dreams are located in the representation (not the experience) of place.

But in the usual mix-up over real life and fiction, Daniel’s mother confuses proximity with access. It’s where you are, not who you are. The problem of course lies in the fact that representation, unlike actual places, is uninhabitable and thus inhospitable, and Daniel understands this instinctively. One cannot live in a picture or the places that pictures make. This is why when Daniel’s mother sings, “California, here we come!” during the opening travel montage and then asks, “What’s the matter, you don’t like my singing?” Daniel moans, “I don’t like the song, Ma.”

I was hooked. Ralph Macchio looked thirteen, but to everyone’s surprise, even the film crews’, he was twenty-two. Since our bodies were the same, slight and prepubescent, it was easy to pretend he was ten. Ralph had no body hair and the waist of a twelve year old. 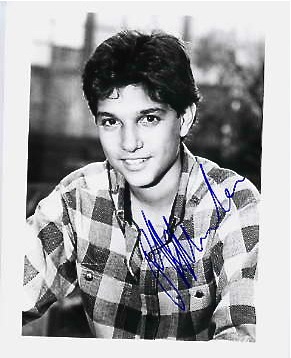 I “published” on a weekly basis and read to my parents (my sole audience), manufacturing my own form of press, in which I was simultaneously journalist and reader. I played both sides of the fence and covered all bases. I acted like an intimate and a fan. I treated him like an actor and a person. I did what any good girlfriend does: I took an active interest in the things my “boyfriend” cared about. I sang Ralph’s praises and watched every single one of Ralph’s movies, aping his walk and mannerisms, and even memorizing his lines, so that I could talk like him, and in the process become not just an actor myself—part of the fiction—but, by doing what Ralph did, I became Ralph.

At a young age, I understood the power and theater of clothing. The way in which it helped me have what I didn’t have. Do what I couldn’t do. Years later, as I watched the somnambulistic “Donnie Darko” ride the Carpathian Ridge on his ten-speed, I was reminded of my own solitary rides around Provincetown. Whenever I rode my bike down Commercial Street, I was dressed in tomboy wardrobe and makeup: short hair, plaid shirt, jean jacket, jeans, Adidas sneakers, walkman—a gender-bending, outsider ensemble I had self-consciously assembled based on the movie boys I’d seen. Movies like “The Outsiders,” in which Ralph had starred.

I added a soundtrack to much of what I did, building a mood around my excursions, cruising around a town full of adults, and was aware, even then, that I was enacting a dramatized (cinematic) image of aloneness and autonomy; the story of girl solitude, which I thought I could only play as a boy, or which I had only seen boys play (“the emotions of youth” that “The Outsiders” purports to capture is really “the emotions of boys”).

Whenever I wasn’t watching a movie, I was screening an image of aloneness for other people’s benefit, which was my benefit. I imagined it as revenge. I was both in and outside the theater of myself. When I was alone, I was Ralph being alone. I was acting alone. Movie stars offer such powerful affirmations of belonging. When it came to Ralph, I could belong to his not belonging because he belonged to a commonality of representation. He belonged to the screen.

Radio On The TV

RSS Feed
Masha Tupitsyn is a writer, critic, and multi-media artist. She is the author of "Like Someone in Love," "Love Dog," "LACONIA: 1,200 Tweets on Film," "Beauty Talk & Monsters," a collection of film-based stories and co-editor of the anthology "Life As We Show It: Writing on Film." Her fiction and criticism has appeared in the anthologies "Wreckage of Reason: XXperimental Women Writers Writing in the 21st Century" and the "Encyclopedia Project Volume II, F-K," and in several other publications such as Bookforum, Artforum, The Los Angeles Review of Books, The Believer, LitHub, The New Inquiry, and The Rumpus. For more Masha Tupitsyn, go here.