Presented on stage by Charles Demers at Ryeberg Live Vancouver 2012. 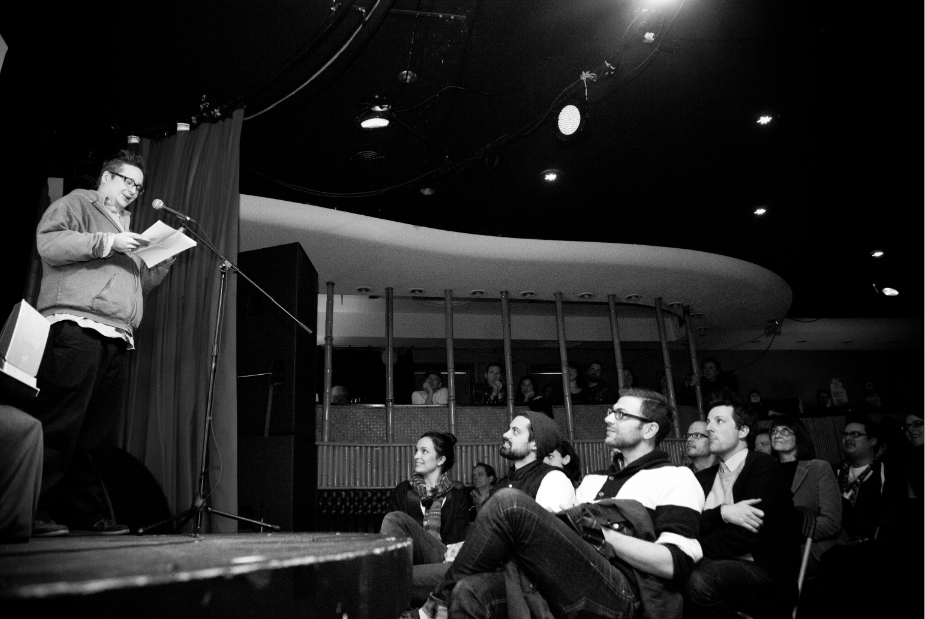 About a year ago, my friend Nicholas sent me a wide-ranging list of videos for a presentation we were doing on various end-of-the-world scenarios. There were videos about the imminent and alarming extinction of blondes; proof that Prince Charles was the Anti-Christ; proof that Oprah Winfrey was the Anti-Christ; and, on a cheerier note, images of floating, space-age Polish cities in the year 3050 over a bed of techno music.

But the videos that most captured my interest were those from the “Prepper” sub-culture — the some-say paranoid, some-say ants-to-our-grasshoppers amongst us preparing for social breakdown, or what they ominously refer to as ‘SHTF’ situations (Shit Hits The Fan — though, as Nicholas pointed out, none of them ever actually uses the swear word). Here’s a peppy introduction to Prepper culture from the “Today Show.”

To me, there’s something so perfectly American about this clip. A smiling, multi-ethnic panel of affluent, friendly morning talk show personalities — including weather and weight loss legend Al Roker — unironically throw to a lunatic chiropractor hoarding peanut butter in his basement for when the world ends. The good almost-doctor was initially terrified by Y2K, but when that terror failed to materialized, he just pulled up his socks like the sectarian follower of a shifty 19th-century Millenial preacher and got ready for the new date.

The segment’s easy back and forth between apocalyptic survivalism and smiley-faced talk show tropes is hilarious: sure, the subtext is the inevitable breakdown of civilization and the world’s first modern democracy and lone superpower’s descent into off-the-grid chaos, but that doesn’t mean we can’t have a little fun! You say he’s stocking up on food? Well, then let’s score the footage with “Hungry Like the Wolf!” He’s got “peaches, pancake mix, peas and plenty of peanut butter”? Well, then let’s alliterate that shit! This is what fighting for survival amongst the ruins of affluence would look like — is it humanly possible to imagine a more emblematic indication of a bourgeoisie on the brink of collapse than someone buying water purification tablets for the pool in their own backyard? It’s apocalypse upscaled — Mad Maxwell.

As they come out of the piece, the hosts eat some of the kook’s freeze-dried poppyseed cake, complaining that it’s dry — then, recovering from this brief moment of snarky incivility, they recover: “But you know what? It has wonderful flavour.” America may be ending, but it’s important to be polite when someone gives you a hunk of space-cake.

Socio-economically downscale in the Prepper hierarchy is the scrappy Yankee Prepper, who offers his family-friendly recipe for the whimsically-named “Martial Law Burgers” in this video (video shortened for Ryeberg Live).

There’s a lot to love about this video, starting with its opening 2 minute 51 second steady, unbroken shot of a bag of dried adzuki beans. Then, there’s Yankee Prepper’s desperate need to telegraph that he is not, for the love of God, a vegetarian. He loves meat, okay? He’s going to teach you how to make a bean-based burger, you know, in case Revelations comes true, but he wants you to know that he’d rather it be meat! It’s like the world’s biggest homophobe is offering a tutorial in how to suck cock JUST IN CASE IT COULD SAVE YOUR LIFE.

The best part is Yankee Prepper’s relatively sunny idea of what civilizational collapse will entail. From what I can tell, the only thing affected will be the availability of animal meat. Otherwise, you can still count on the ready availability of exotic spices like chili and cumin. Needless to say you’ll still have a steady supply of electricity for your food processor. Processed and cheddar cheeses will be accessible (from milk produced, one assumes, by fleshless cows); and you’ll be able to gorge yourself on that staple of bomb shelter cuisine: “tightly-packed fresh cilantro.” Yankee Prepper even implores you to opt for a smoky salsa, out of the infinite range of salsas you’ll have to choose from amidst the carnage, wreckage and looting. If this is how it’ll be, who can wait for the SHTF — salsa hits the fajita.

But how will you pay for your cilantro after the currency collapses? Well, by bartering, of course.

It’s possible that this is the most heartbreaking video on the internet. Let’s review: every year, this man’s father buys him the same terrible, $19 Christmas gift — waxy chocolate liqueurs that he proceeds to hoard for bargaining chits at the end of the world. In the meantime, he allows himself a single tray to repeatedly bring out for parties, watching it slowly empty out. The one redeeming bit of good news is that he has never tried to get drunk on them. Then it’s right back to tragic when he says ‘Grand Mariner.’

Other Preppers have a different view of how the post-currency economy will play out.

When I watched first watched this video with Nicholas and our friend Sean, each of us came away with something different. I noted how the Prepper keeps compulsively holding up the thing he is talking about, even if he has just shown it to us. “Wait — what’s he talking about? Ammunition? What does he mean? Doesn’t he have a little box of it that he could lift into frame?”

Sean pointed out how this guy seems to think that SHTF reality would be just like some kind of video game, wherein you’d walk around ‘acquiring’ errant firearms, and maybe charisma points (not that this guy is lacking). It was Nicholas who noticed how, even in this man’s conception of a dissolved, charred and smoking post-American landscape, friendly Canada is still just over the still-functional border (!), and still has better medications. There’s something super comforting about the permanence that comes with Canadian boringness — you can almost hear the Canadian border guard: “Good afternoon, sir. You folks still havin’ that nasty lawless descent into a Hobbesian nightmare of all against all? Say, that’s a tough bit of business, eh? Oh, well — here are your antibiotics, you take care, eh?’

The most ‘liked,’ top comment underneath this video on YouTube is the following: “Beautiful woman, cute kid, great firearm. What’s not to love!” See? Just because the black, Kenyan Muslim Marxist-Abortionist president is bringing society to a fiery collapse doesn’t mean there’s no time to stop and lech over a chipped Aryan nose, carefully-tended eyebrows and giant handgun.

This lady is the personification of a backyard pool filled with purification tablets: she’s not just a MILF, she’s a PMILFWSHTF — a prepper mom I’d like to F when shit hits the fan. Something about the make-up, the Costco art, and the violently traditionalist femininity is reassuring to the hyper conservative prepper. Just like Yankee Prepper’s apocalypse won’t stop flow of delicious cumin, the end of the world doesn’t mean that normative gender performance goes out the window: soft-voiced ladies will still look pretty and take care of the babies after the collapse; they’ll just have to carry guns, too. “That is it,” she says after her firearms tutorial. “We’re going to go out shopping now.”

I’m sorry if these visions of the end-of-times are depressing: trading bullets for chocolate liqueurs, MILFs eating burgers made out of beans. It’s enough to really bring you down. But buck up, the news isn’t all bad. In 3050, this is what Poland looks like.

RSS Feed
Charles Demers is an author, humourist and comedian based in Vancouver. He's performed at the Just For Laughs Festival and is a regular guest on CBC's "The Debaters" and "This is That." He is the author of the books "The Prescription Errors." "Vancouver Special" (shortlisted for the Hubert Evans BC Bookprize for Non-Fiction), and The Horrors: An A to Z of Funny Thoughts on Awful Things." For more Charles Demers, go here.