Presented on stage by Sheila Heti at Ryeberg Live Toronto 2010. 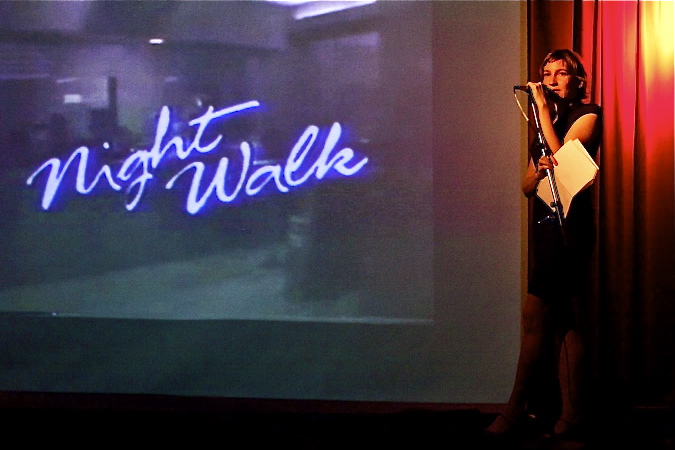 “God is dead. God remains dead. How shall we comfort ourselves, murderers of all murderers? … What festivals of atonement, what sacred games shall we have to invent? Is not the greatness of this deed too great for us? Must we ourselves not become Gods simply to appear worthy of it?”

On this night, 130 years after Nietzsche wrote these words, we’re not talking about whether God is dead. Tonight, there is another death we murderers of all murderers are responsible for.

Of course, I am talking about TV.

And so we say, “TV is dead. TV remains dead… What festivals of atonement, what sacred games shall we have to invent?” — Ryeberg Live? — “Must we ourselves not become TVs simply to appear worthy of it?”

The answer is, obviously, yes. We must become TVs.

But before we become TVs, let’s look at what TV was, back before we killed it. Let’s look at it as it was in our childhoods, since that is also where one’s image of God coheres.

There was “regularly scheduled programming” – and then there were also hours when the TV did not broadcast shows; it rested for the night. Instead of “Kids Incorporated,” there was this:

I don’t know if you ever got up in the middle of the night to watch TV and found this instead, but I did, and sometimes I would watch it. It was almost like playing a game of chicken with myself: How long can you watch this for? I remember sitting there thinking, Is there anyone else watching this right now? Is there something wrong with me for watching this?

The dirtiness and excitement of this feeling and this question is one of the things missing from YouTube, where you know, whatever time of day or night it is, millions are up watching it, too.

There was something touching about how TV used to stop transmitting, like they wanted to let you down easy. They would make a big production of saying good-night – like they were your parent and you were a child; there was a whole, long, drawn-out, saying good-night ritual.

Here’s how Global did it, in 1993 – right near the end of TV stations doing this…

Then something happened. TV stopped showing colour bars. It started showing infomercials — of which there were many — hundreds. To me, however, they all seem to cohere in this one clip.

Cubic zirconia — it was on Home Shopping TV that I first heard those words.

While all the other TV stations were showing infomercials, Global TV was not. Instead of 1-800 infomercials, and instead of talking about blenders – between 1986 and 1993, from 3 AM till 5 AM, Global showed the best art Toronto has ever made about itself.

I find it really mesmerising and beautiful. Too bad there are only clips of it here, with jumps and breaks. Back then, it was on a loop, I think, and would run for hours. I was too young to go out at night, so this was my first exposure to Toronto after dark – and to Toronto after dark as it would have seemed if I was alone, rather than with my parents or anyone else. It had a whiff of danger about it, of sex and glamour — the forbidden. I thought my life would be this way when I grew, and that I’d feel this way quite often — but I don’t.

Still, I love “Night Walk” for many reasons; it doesn’t do that thing that so much art about Toronto does — which is make it into something it’s not, either by building it up or tearing it down. It’s just Toronto. Not Toronto the World Class City; not Toronto the dump one has to escape from — but the singular Toronto I love.

It made me love this city when I was a kid, and watching it today, it still makes me love this city all over again; and by love, I really mean love – because love is not about comparing the object of your love to other things sort of like it and judging it to be the best; I mean love like the real love, where there’s some deep recognition that this thing lives eternally inside you, that it cannot be replaced, and that if it didn’t exist, your world and your self would be fundamentally beyond recognition.

If we have become TV – what does that mean for our lives?

It means that our day is made up of programming and things that happen outside those hours when programming happens. So programming is like seeing your friends, going to work, having breakfast, showering, sleeping. And then there are those unaccounted for minutes or hours where we “do nothing” – those hours beyond the programming – and we can choose what we want our non-programming time to resemble:

I choose “Night Walk” because I want more of that in my life; the feeling of being a solitary wanderer on the face of this earth, interacting only with my physical environment. I want more of life as a long-shot, not interrupted by anyone or anything.

On the other hand, we can not choose, which means that our non-programming time will give us the sensation of all four once: life will feel just like watching colour bars, while simultaneously watching the home shopping network, while watching regular scheduled programming, and also “Night Ride” – a mixture of tedium, commerce, content and art. More to the point, our off-hours feel like the feeling of watching a lot of YouTube: Part annoying buzzing, part featured attraction, part commercial break, and part genius. This is the feeling that clutters our non-programmed time, most often. What a TV is in its non-programmed hours is the Internet.

Is there a way to change that? Can one become, instead, Global TV circa 1990, in the early morning hours? That my life is not like that often enough is one of my bigger, personal disappointments.

After giving this lecture, a fellow Ryeberg curator named Jeff Warren approached me and told me to look at this clip, for help in that pursuit.

I haven’t yet watched it, and for this I’ve felt disappointment in myself. I’ve been too busy being cluttered, my insides resembling the feeling of hours of watching YouTube. Should I be disappointed that I’ve had muddiness rather than clarity? What is disappointment?

This last clip, I hope, offers a very good illustration of disappointment. Now that we have become TVs, here is what disappointment means to us:

Surely this is a way toward the serene, enlightened, steady, focused walking through the unknown streets.

RSS Feed
Sheila Heti's latest novel is "Motherhood." She is also the author of "The Middle Stories," "Ticknor," and "How Should A Person Be?" —  chosen by The New York Times as one of the 100 Best Books of 2012. She's also published an illustrated book for children, "We Need a Horse," featuring art by Clare Rojas, a book of "conversational philosophy" called "The Chairs Are Where the People Go," with Misha Glouberman, and, as co-editor, a book about what style really means, called Women in Clothes. More Sheila Heti here.