Performed on stage by Nick Mount at Ryeberg Live Toronto 2012. 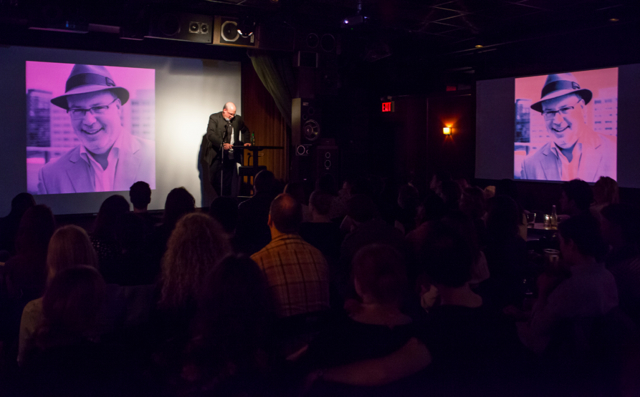 Swinging in the backyard,
pull up in your fast car
Whistling my name

Amid all the talk about the name, the pout, the lips, all the hype about the hype, it’s been easy to miss that Miss Lana Del Rey writes damn good pop lyrics: or Miss Del Rey & Co., if it makes you happy. “Video Games” has 44 million views1 and counting partly because its lyrics create a fully realized physical and emotional world, a world described with remarkable consistency by those who like it, and those who don’t.

But the story, of course, was the video, that video, apparently also the product of her eye and hand: for colours and clips, for emotional connections across decades, home movies and found footage.

That’s the “real” LDR, the one on YouTube. “Video Games” is a YouTube Video in every sense: made from YouTube parts, born on YouTube, made famous by YouTube. The song’s later live performance, on SNL or anywhere else, is as irrelevant to its significance as it was to its success.

We agree on what we see in that video; we just don’t agree on whether we like it or not. “Video Games” is as polarizing a video as I can remember, and I mean between otherwise reasonable adults, not the kind of pubescent confusion that’s made Justin Bieber’s “Baby” at once the most “liked” and the most “disliked” video in the world. My wife, to cite only the most important example, can barely conceal her contempt for the same video that I find pretty much endlessly compelling.

The difference, and the disagreement, comes down to the question we’ve been asking since we first saw the video: Is it sincere? When she says her idea of fun is playing video games, does she mean it?

It is a strange question to ask of a pop star. Nobody asks if Madonna really was a virgin, if Lady Gaga really was born that way. But Lana Del Rey got branded from the start as indie, and since everybody knows indie music is never fake, she confused us. At the other end of the confusion, twentieth-century art taught us that real art is always ironic, that sincerity is for Hallmark and Disney, while twentieth-century feminism taught us to have a have hard time liking a song like that, a woman like that, unless it’s ironic.

Not surprisingly, the question has proved hard to answer. Last September, Amy Klein of the punk band Titus Andronicus crucified Lana Del Rey for everything that’s wrong with America: the decorative tabula rasa that sits at home waiting to mix its man a martini then, play video games now. This January, she took much of it back. Ms. Klein hasn’t changed her mind about America, but she’s done an about-face on Lana Del Rey: now she’s “a pop star playing a role.” She’s still a bimbo, but she’s an ironic bimbo, which is better.

In February, Liz Phair similarly confused her indie girl fans by coming to Del Rey’s defence in the Wall Street Journal (!): again, not for her music, but for “giving herself a part to play.” Liz likes Lana because Liz thinks Lana is being ironic. 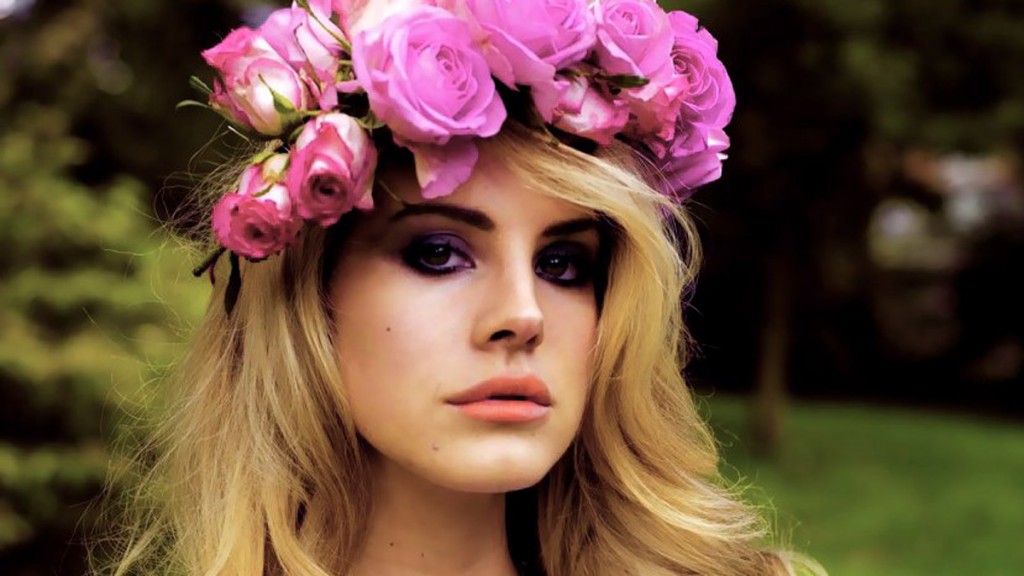 Men, meanwhile, generally like Lana because they think she’s being sincere. Back in September, Amy Klein complained that Del Rey “conquered America with plastic surgery, video games, a regression to nostalgia, and an appeal to the sex drive of every male music critic on the planet.” That’s not entirely fair: not all music critics are men, and not all of those who are men drive that way. But from the reviews I’ve read, never mind the YouTube comments, I’d say it’s not far off. We see what we want to see in “Video Games” — what we want, and who we desire.

But setting sex aside, maybe we struggle to decide if “Video Games” is ironic or sincere because the entire performance is deliberately balanced between the two.

Lana Del Rey has prompted concerned comparisons to “Lolita.” But they are comparisons she invites, repeatedly: in her performance, her videos, her lyrics. She’s read the book, which is more than I can say for sure about those making the comparisons. Of all Nabokov’s novels, the key to the special genius and appeal of “Lolita” isn’t the sex (there isn’t any): it’s that it’s both a confession and a parody of a confession, always sincere and always ironic, at the same time, in every line. Give Lana Del Rey credit: maybe she knew that, and maybe she did that.

Or, maybe she’s taken a page from an art movement that’s as much in love as she is with mid-century American popular culture, so-called Lowbrow Art. 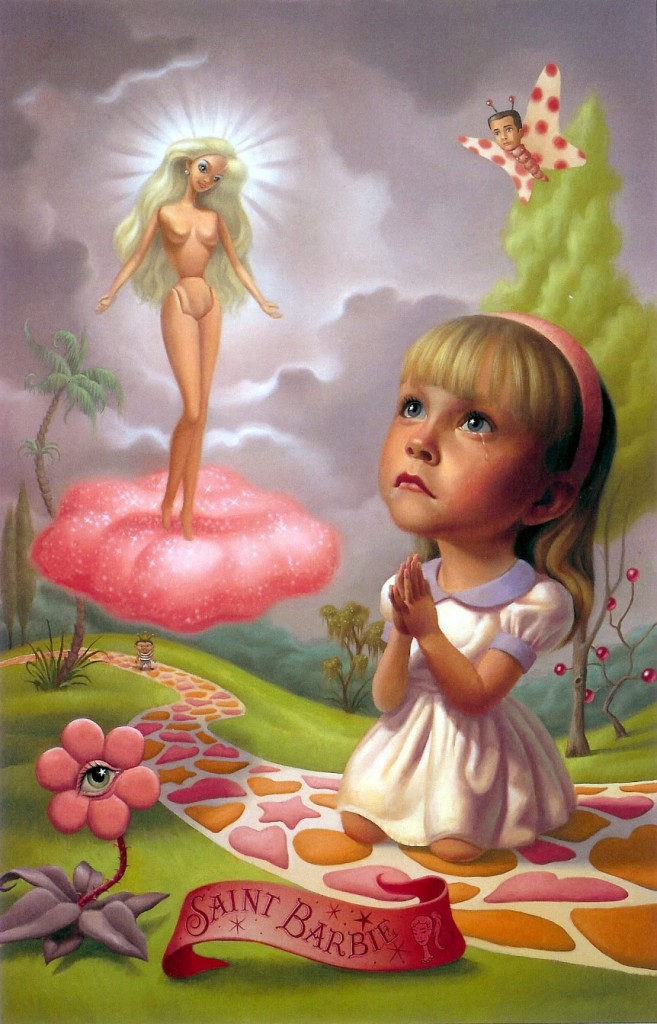 That’s by Lowbrow’s best known artist, Mark Ryden. It’s called “Saint Barbie.” It’s not ironic: it’s sincere. I know this the only way you can know such things, not from the painting but from what I know about Lowbrow Art and Mark Ryden. “Saint Barbie” is what a friend, Jeremy Keehn at Harper’s, once called “bironic”: something that our education and our culture has trained us to see as ironic, but is actually sincere.

Like many popular products of recent years, “Video Games” returns us to a vaguely defined 1950s or early ‘60s, the ‘50s of our collective memory, of nostalgia. It’s not hard to understand why it’s the ‘50s turn for the nostalgia engine, why now: in that collective memory, it was a time of economic security. Those people had jobs.

Some of the recent retro ‘50s music videos are straightforwardly ironic, like Beyoncé’s send-up of the pinup at home, “Why Don’t You Love Me?” Some are sincere, like Low’s “Try to Sleep” and Tyler T. Williams’s video for Youth Lagoon’s “Montana.” The one I know that comes closest to the birony of “Video Games” is called “Lord Knows Best.” It’s by Alex Zhang Hungtai, a young Taiwanese Canadian who records as Dirty Beaches.

RSS Feed
Nick Mount is Associate Professor of English at the University of Toronto, where he teaches Canadian literature and contemporary culture. He's also the author of "Arrival: The Story Of CanLit". Still, he wishes he was half as awesome as Techno Viking.