Long before my family ever bought a VCR (we would rent them for birthdays, along with “The Neverending Story“), I owned one video.

I’m not sure where I got it, or why, as I could only ever watch it at friends’ houses, but this 65-minute VHS tape became an integral part of a childhood spent obsessing over soccer. (What follows might only appeal to fellow soccer fans; though, maybe not…) And of the 101 Goals, there was one that was my unequivocal favourite — a stunning, unbelievable piece of magic by a black player with a funny name: Fashanu.

I was reminded of this Fashanu, whoever he was, during the 2006 World Cup, when Argentina’s Maxi Rodriguez smacked a very similar volley into the net against Mexico.

This set the wheels of nostalgia tumbling into motion. What ever happened to that Fashanu character — had he scored any more goals like that two-touch miracle back in 1980? And so to the Internet I went, where answers — and videos, I hoped — awaited me.

Here is the condensed version of what I learned: While that marvellous goal (at eighteen years of age!) promised great things, Justin Fashanu never really fulfilled his potential as a professional footballer. After securing a million-pound contract, the first ever for a black player, he bounced around between a dozen clubs, increasingly frustrated on the pitch and brooding off it. Then, in 1990, he dropped a bomb in the British tabloid press, and came out.

Fashanu’s homosexuality wasn’t a huge surprise; his regular visits to “poof clubs” had accounted for at least one team dumping him. But in a league rampant with homophobia, no other player had ever admitted publicly to being gay (and none has since). What Fashanu, already the target of racial discrimination, assumed would be liberating — he’d previously retreated into Christianity, which had only made for suffering — turned into a nightmare.

With a knee injury providing an excuse for no British team to take him on, Fashanu ended up in America, where he teased fans and teammates with irregular moments of brilliance before retiring from the sport in 1997. He stayed on in Maryland to pursue coaching, but the following year was accused of sexually assaulting a 17 year-old boy after a party at his house. Then, on May 2nd, 1998, after fleeing back to England, Justin Fashanu hanged himself in a deserted lock-up garage. His suicide note denied the rape charge: “I didn’t sexually assault the young boy. He willingly had sex with me… Why did I run? Well, justice isn’t always fair. I felt I wouldn’t get a fair trial because of my homosexuality.”

I was gutted. Sure, I’d let soccer fall off my radar, but how did I miss this story? Scouring the internet for more information yielded the misguided, confusing and completely asinine, but also a few gems. This interview with a young, wide-eyed, earnest Fash (at the end of the clip) reveals the sort of athlete — “accommodating, articulate and charming in a world where surly, thick and gum-chewing is the norm” — you feel lucky to cheer for.

That same warmth and little boy naivete is echoed on a single, more than a little reminiscent of Eddie Murphy’s foray into pop music, he recorded in 1982. 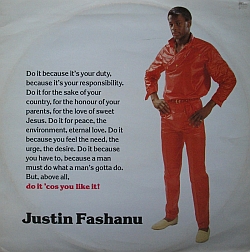 Unfortunately, most of the stuff I found was far less heartening. Remembered variously as “one of the most complex and, perhaps, tragic players of his generation” and, in The Voice, “an affront to the black community… pathetic and unforgivable,” these reminiscences framed Fashanu’s life exclusively within the all-too-commonly perpetuated narrative of gay tragedy. Little felt like anything approaching a respectful elegy — even the normally reasonable Independent misinterpreted Fashanu’s grandstand-bestowed nickname, “The Queen of Hearts,” and corresponding chant, “Say ooh, aah, up yer arse,” as somehow “affectionate.”

Most upsetting was a profile written by someone named Brian Deer, published in the reactionary Mail on Sunday. Deer’s missive ranged from transparent, racialized manipulation (juxtaposing Fashanu, “powerfully built: 190lbs, 6 foot 2 inches,” with his accuser, “17 years and three months-old, fair haired, blue eyed, with a wide smile and pink cheeks… the best-looking boy in the room.”), to, considering that the charges were dropped due to lack of evidence, unabashed libel: “The ex-star raped the boy.”

The article was a raging, hate-mongering document of its author’s prejudices, culminating, to me, with the greatest offence of all. That beautiful volley from the top of the box — BBC’s Goal of the Year in 1980, arguably the Goal of the Fucking Century — Deer dismissed as “a big chunk of luck.” And, most dismayingly, Peter Tatchell’s otherwise heartfelt rebuttal, published in the Guardian, didn’t tackle this comment.

“A big chunk of luck” — here is hatred beyond anything I can fathom. I am not trying to be funny. Justin Fashanu’s private life is one thing; his motives for coming out (he was paid in excess of 100,000 pounds for the story) and the events of that night in Maryland are certainly subject to speculation. But that goal! It was, and remains, a moment of pure, glorious truth — and I’d assumed irrefutable as such. To deny this must require the absolute darkest, most evil and hate-filled blindness. How do you not, as the performance artist Inter Ference puts it, “remember that famous goal with a sigh?” How do you not see in it all the potential for beauty in the human body, spirit and mind?

Dave Hickey has written about a similarly riveting highlight in the sport of basketball: Dr. J’s astounding reverse lay-up during the 1980 NBA Playoffs (the same year Justin Fashanu scored his legendary goal).

Hickey’s essay wonderfully captures the exuberance and awe that I felt as a kid—and still feel now—at a gifted athlete’s act of singular genius: “Jesus, what an amazing play! Just the celestial athleticism of it is stunning, but the tenacity and purposefulness of it, the fluid stream of instantaneous micro-decisions that go into […] completing it. Well, it just breaks your heart.”

What sort of monster do you have to be that, with one kick, Justin Fashanu doesn’t break your dead fucking heart?

RSS Feed
Pasha Malla is the author of "The Withdrawal Method" (stories) and "All Our Grandfathers Are Ghosts" (poems, sort of) and "People Park" (a novel).