I have taken a long time to write about Pruane, and now I am sitting down to do it on the most beautiful day there has ever been. Words only come at the worst possible moment. And yet, here they are. I feel embarrassed at having taken so long to write about Pruane, while he is so focused and hardworking, so it could be the punitive condition that my brain is enforcing — sitting to type indoors when there is heaven outside. Isn’t it funny to think of a brain this way, to think of your own thinking and why you can’t think in a new, more pleasing way?

Perhaps I am a wretched woman. But because I have only ever been myself, I have no one else to compare my feelings with. When I watch Pruane’s videos, I feel as though they are personalized gifts made directly for me. There is everything I want to see and listen to, presented to me in a way I would not have expected to love so much.

Pruane is a young teenager who records his reviews of pop culture media and video games, celebrity news stories and rants. His most precious gift is diction, especially the delicate touch he applies to profanity. 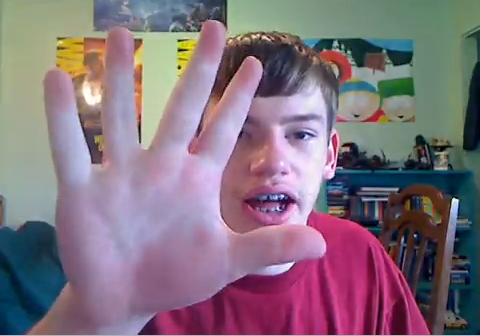 I am also completely drawn in by Pruane’s literalisms, and by the deadpan way he presents them. In this offering, a review of two video games, Pruane opens by referring to his own wet hair, sounding neither excited nor proud, but kind of disgusted. His view of his audience, I can’t quite decipher: complete disregard, utterly candid? He seems to occupy a space between completely wide-eyed orator and shut-in stream-of-consciousness.

He is completely familiar, and his world of complaint — made both enormous and tiny by a computer monitor — is the most topical, banal, and totally gripping human thing I have seen in so long. His natural voice is completely uncanny and the personality that it projects is uniquely hilarious without being a victim.

I wanted to write to Pruane, but I was bashful. He is so busy, so engaged. I have followed his example, and written a little, and now may finally go outside.