In May 2007, I traveled from London to the French Riviera. Intending to go about as anonymously as I could, I spoke French, and to my delight was mistaken for Moroccan or Algerian. I had developed a curiosity for the town of Grasse, a place where the great French perfume houses of the 19th century — Molinard, Fragonard — had their

manufacturing headquarters. I was collecting fine French perfumes and wanted to see for myself the magnificent early machinery and industrial design for floral distillation and maceration, and the museums of fantastical rococo and orientalist bottles.

My small 2-star hotel stood in a shabby street near the Gare Nice-Ville. Every morning I saw from my window the peeling rosy surface of the building opposite, hugging a steep little staircase leading to the main drag and the louche promises of the train station. The wall advertised, pertly, couples coquins, along with a phone number; its desperate yet forlorn appeal reminded me of Maria Schneider in “Last Tango in Paris.”

I was told recently that I had a forlorn look on my face in a photograph, and wondered about the forlorn’s hold on me — did my experience of melancholia show on the outside, not only cut a window into my heart? Did I have a look, in those serious moments, of one who waits eternally for her lover to return, for life to begin at long last, once he comes back?

I first understood the word “forlorn” from a children’s book, when I was a girl. My father would read to me from an anthology of German children’s folk tales translated into English — a book he bought me in an English language bookshop abroad. It contained a story called “All Good Things Must Come to an End,” and while I don’t recall the story’s plot, I do remember the illustrations of the “folk” — it seems there was great unhappiness about the end of some great feast.

When I was in my first year of university, I was desperately miserable about a boyfriend I had left behind in another city. I attended the premiere screening of Jean-Jacques Beineix’s film, “37.2 Degrées Le Matin” (“Betty Blue”). To this day, it is the only film I have ever watched in which I cried from beginning to end. On first viewing it, I was already forlorn, well before I discovered the tragic end. I do not know the precise trigger: the sunsets and the isolation of the couple in a pre-lapsarian love shack at the seaside, the sorrowful beauty Béatrice Dalle, or Gabriel Yared’s musical score.

It is not possible for me to watch even a short segment of this film without experiencing a flood of tears. Is it because I believe that nothing beautiful can last, that if it is beautiful, it must be fleeting? It’s the same mnemonic flood one has on smelling a perfume from long ago — some imprecise sense of loss, of a particular time and place (or person) possesses the mind. The forlorn runs deep in my imagination merely due to what remains, what lingers.

But another image presents itself, and another. One is of a helpless foal, whose legs are folded under, sitting in a field of hay, looking out to the world, perhaps (I imagine) waiting for its mother. Or Natalie Wood, exquisitely, in the role of Deanie Loomis in “Splendor in the Grass,” when she is unable to explain to her literature class how to accept loss. She cannot find strength in what remains behind, as Wordsworth counsels in the “Ode on Intimations of Immortality.”

Even as the flowers sit on the teacher’s desk in their glory, she cannot grasp the loss. They are dead in the vase; their glory, lost. Years later, at the end of the film, Deanie visits the high school sweetheart who had left, and he is happily married with a family of his own. 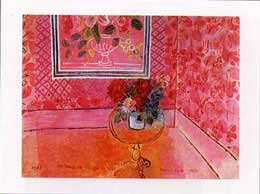 I was impressed recently as I looked through an old biography of the painter Raoul Dufy. We are seized with a strong sense of the forlorn on seeing his vase of flowers, “Trente ans, ou, la vie en rose” and many other paintings, such as families by the seaside, regattas viewed from the strand, a sunny frame of the sea from a hotel room, palm trees along Nice’s Promenade des Anglais, and so on. This is so because the forlorn intimates a span of time: Thirty years or likely, much longer. Because he paints the joy between people though, he makes me believe that life is long and beautifully long; that there is strength to be found in what remains behind.

RSS Feed
Nyla Matuk is the author of the poetry collections, "Sumptuary Laws" and "Stranger." Her poetry, fiction, and essays have also appeared in numerous literary journals including Event, Room of One's Own, Descant, The New Yorker and Poetry Review. She has also contributed journalism on architecture and literary topics as a freelancer to the Globe and Mail and various magazines. She is editor of an anthology of poems, "Resisting Canada." For more Nyla Matuk, go here.