Performed on stage by Miriam Toews at Ryeberg Live Vancouver 2012. 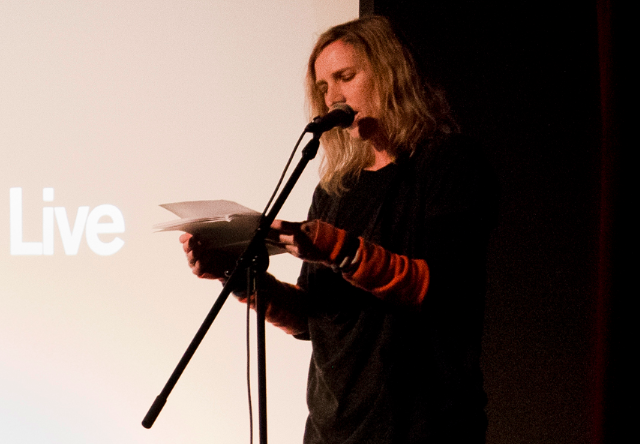 To begin my piece tonight I’d like you to join me and 30,000 others for a minute of silence.

When I was a kid in grade two a new girl named Frieda came to our class. She had a square boy’s haircut and dark blue eyes that were always shiny. She was cute and good at soccer. She seemed older than the rest of us but she wasn’t. She was sombre and quiet. Really quiet. She never talked. We all wondered what was wrong with her.

She could write things down and read and she could understand the other kids and the teacher and nod and smile faintly but she never spoke. Sometimes at recess a few of the kids would ask her why she didn’t talk and she’d look at them and shrug.

She was weird and it bugged us somewhat. We didn’t treat her badly but her silence made us unsure of ourselves around her. We felt idiotic, like she held some secret to the universe that we hadn’t figured out yet. She seemed to like us well enough and anyway we were very young and open to odd behaviour because we didn’t know much. Our teacher didn’t seem to mind that Frieda didn’t talk. She didn’t call on Frieda to answer questions in class or make her do oral presentations. I remember telling my parents that a girl in our class didn’t know how to talk but otherwise she was pretty okay.

One day Frieda wasn’t in school and our teacher took the opportunity to say that we should stop asking Frieda questions about why she was silent. She told us something that shocked us. She said that Frieda knew how to talk, she could talk perfectly, in German and English, actually, but that right now, these days, for whatever reason, she couldn’t talk. Or chose not to talk. But whatever it was, it didn’t matter and we were instructed to accept her as our friend and never treat her muteness as a problem.

So Frieda moved with us from grade two to grade three to grade four, five, six… all through elementary school in total silence. In junior high, we all moved to a much bigger school, and I lost track of her. We weren’t in any of the same classes but then I heard that some new girls from a different little town, who came to our town for school, had started mocking Frieda. Then I heard that these new girls had arranged for some kind of showdown where they were going to force Frieda to talk. They knew she knew how to and it made them crazy, indignant.

I didn’t see it happen but I heard that these girls jumped her after school one day and just started kicking her, punching her, telling her they’d stop if she said she was sorry for not talking and would promise that she’d start talking from now on. Frieda didn’t say anything. She just took the punishment, bleeding from the mouth and curled up on the ground with her arms over her head until some adult walking by told the new girls to get lost and leave that kid alone. Soon after that I think Frieda quit school or maybe transferred to some other one. I never did find out.

Recently I watched Ingmar Bergman’s film “Persona.” In it there’s an actress who refuses to talk and it got me thinking about Frieda. It made me realize, in retrospect, that the girls who beat Frieda up were indignant because they were terrified. Terrified not just of the strange ascendancy it gave her but because they could not understand it or explain it.

In Bergman’s film, the actress — played by Liv Ullman — is a celebrated stage performer named Elisabeth Vogler. Suddenly, in the middle of a scene, and for no apparent reason, she stops, she falls silent. She will no longer say a word. Why? No one knows. She must be ill. She must be suffering a mental breakdown.

But at the hospital where she is being cared for, the psychiatrist is skeptical and suggests that maybe Elisabeth’s condition is somehow voluntary.

I don’t know whether Bergman is explaining Elisabeth’s mutism to us via the doctor, or if he is simply offering up the conventional reading of her condition. My feeling is that he wants us to take this monologue — however lyrical it may be — with a grain of salt, and that he is skeptical of psychiatry’s ability to deal with certain kinds of behaviour.

My older sister also stopped talking from time to time. She didn’t fall silent one day to the next. It happened over time until she had stopped talking entirely. That was many years ago and after that she regained her desire to speak and then lost it again, regained it and lost it. We never knew when she’d be talking or not talking but again. It was frustrating at times and at other times somehow not.

She’d write her answers to questions and whatever comments she had in small notepads and we’d communicate like that, often for months at a time, until whatever mysterious force had made her silent disappeared. But it was bewildering. She was pleasant and content, engaged it seemed, and yet remained silent. As though the silence was, finally, the solution to her problem and she, at least, could relax even though it made the rest of us somewhat insecure.

Admittedly, I felt hurt by it at times, like she was turning away from me or pushing me away from her. I recall occasions when I would start to cry and have to leave the room. At other times I’d tell her I didn’t feel like answering her scribbled questions, basically telling her that two could play this game, but the sad look on her face implied that it wasn’t her choice, really, not talking, but something beyond her control.

My daughter was about three the first time my sister stopped talking and it puzzled her. She began to ask everyone she met, on the bus, at her daycare, in the grocery store, if they talked. Do you talk? became her trademark greeting and her burning query.

A few weeks before my sister died she decided to see a psychiatrist. She wanted to be normal, to not feel crazy, to be herself again. But she was in one of her silent periods so she had to communicate with the shrink by writing things down. The shrink, apparently unaccustomed to this particular form of psychic pain, became exasperated and said he couldn’t deal with her silence. He told her that she was wasting his time and if she wanted help she would have to cooperate with the basic conventions of communication. She would have to talk.

My sister had gone to him desperate for help, and he, the guy trained in and responsible for curing mental illness had basically told her that until she got rid of that illness he would refuse to treat that illness. Because to treat her, he would have to bend to her dictates. He probably couldn’t bear having the tables turned, his silence taken from him. Maybe he felt accused by her silence, or defied. He just didn’t like the power that her silence gave her. That’s what silence can be: power, accusation.

One of the scenes that most struck me during last year’s Occupy Movement took place on the campus of University of California Davis, just outside Sacramento. That’s where the campus cops drove batons into the ribs of students protesting tuition hikes, and then casually pepper sprayed them in the eyes when they refused to move. Students reacted by calling for the resignation of the university chancellor, Linda Katehi, who had authorized the police crackdown.

The next day they gathered outside the building where the chancellor was giving a press conference. The chancellor refused to leave, apparently wanting to give the impression she was being held hostage. When she finally came out, many hours later, accompanied by a student representative who had assured her it was safe, there were no chants and no placards (video stopped at 1:10).

It’s a shame when the journalist asks a question, ceases to respect the silence. The protest’s effectiveness doesn’t come from a chanting chorus of voices. When the silence is broken, the protest is broken.

I recently googled a few questions like: why do people become silent for long stretches of time? And why do people stop talking? But I only came up with blog entries about the insecurities people feel in social situations, like, “why do guys stop talking to me after we’ve hung out only once?”

I did find one amusing site though. People were asked if they would be willing to go one year without speaking a single word in return for a million dollars in cash, tax free. I couldn’t believe how many, almost everyone, said no way, impossible, not worth it! For me it’s a no-brainer. I’ll talk to you in a year about that money.

Finally I did find the official name for what Frieda and my sister were practicing: selective mutism.

In Bergman’s film, Elisabeth Vogler leaves the hospital for an island retreat, where she’s meant to recover her health — that is, her desire to speak. She lives there with a nurse named Alma — played by Bibi Andersson — who indulges her mutism and who tends to her every need. It’s a very intimate arrangement, and Alma fills in the silence with her own monologues. Elisabeth responds with benign smiles and even the odd caress. Alma begins to believe that perhaps she’s found a new friend, someone who deeply understands her. One night she gets drunk and tells Elisabeth of her most private shames.

The dynamic changes when she opens one of Elisabeth’s letters, written to her psychiatrist, in which Elisabeth speaks condescendingly of her and all her genuine intentions to help. Alma feels betrayed. Now the silence becomes unbearable.

This is the moment she confronts Elisabeth, who is finally forced to cry out and say something. But instead of providing relief for Alma, it frightens her. The strange and delicate structure of their relationship has been destroyed by words and sound.

Where is Frieda now?

It’s because of the non-speaking role she played that I remember her.

RSS Feed
Miriam Toews is the author of seven novels. These include "A Complicated Kindness," "The Flying Troutmans," "Irma Voth," "All My Puny Sorrows," and "Women Talking." She has also published a work of non-fiction — "Swing Low: A Life" — about her father's struggle with manic depression and suicide. Photo: Carol Loewen