1) The Teenager Takes Over From The Adolescent

First we read from scrolls, like the ones found in Khirbet Qumran near the Dead Sea. Then we got the codex: instead of unrolling and scanning, we began thumbing through, flipping, slamming shut. About 1500 years later, Gutenberg (re)invented moveable type. His printing press eventually led to photocopiers, which gets us pretty close to the 1970s and our first home computers. Next we had the Internet. Thanks parchment and paper, thanks Mr. Postman, we’ll take it from here.

And so we’re back to scrolling and scanning. Our words are not printed, they’re displayed. The new scroll is a screen. We can’t turn the page; we can only go to the next or return. We do not read from the beginning; we start in the middle, we mine for information, we search and seek by way of invisible algorithms; we get what we need and we move on: we click through — and in an instant, one scroll is replaced by another.

“Look, uh, let’s back up just a bit Marshall.” Why the hell did these old TV presenters feel the need to perform their befuddlement, and in such a smarmy, cartoonish way?

In any case, safe to say computers and the Internet are changing the way we think and read — and yes, authorship and context are getting harder to determine, narrative is being lost. Got that. So is it the end of the codex, the end of the printed book?

E-books? This is what literary man Harold Bloom has to say on that topic: “Imagine that for the last five hundred years we had nothing but e-books, and then there was some great technological advance that brought us the printed and bound book. We would all be ecstatic. We would be celebrating after the long horror of the e-book.”

2) Look I’m On A Teaching Machine!

If an appliance store was the symbol of the age in 1960, today it’s the iPhone. Switch the channel from prophetic Marshall McLuhan to long-haired, sandal-wearing Steve Jobs, major player in our recent leap into the digital age. Here he is in an early TV appearance, as wowed by it all as the next man.

3) The Mozarts Of Digital Design

We spend hours a day gazing into “our new gadgets,” glowing in their blue light. Who is responsible for this? A small group of men from a very modern tribe, and this is their story, told by tribal member Robert X. Cringley, back in 1996.

5) Give The Prize To The Exploiter

IBM would have to do better. Apple was stealing market share. People wanted personal computers. The suits at IBM sought out a few well-reputed young nerds to help them make a mass-market personal computer. They needed an operating system. The best candidate was Gary Kildall, inventor of CP/M. Don’t recognize the name? Heard of Tim Paterson? They are the relative unfortunates in this part of the story (jump to 11:11 of the video below). The winners, you know them all too well.

6) All The Way To The “Much-Hyped Information Highway”

“You want to sell sugar water for the rest of your life, or do you want to come with me and change the world?” (jump to 40:35) Here comes the part of the story where Steve Jobs discovers the Xerox Alto, which inspires him to create Macintosh, which leads to more of that changing the world stuff.

Windows 95, “the biggest, noisiest product launch in the history of the personal computer”? Mr. Cringley, you’d better check out Steve Ballmer pulling a Matt Foley at this Microsoft Annual Conference.

Also, what was that? “Apple is now a fading force in the PC marketplace.” Ha ha! How times have changed since Cringley made his documentary! Once Steve Jobs was restored to Apple as CEO, he got busy developing the iBook, the iMac, and then the iPod, along with close companion, iTunes. Jackpot!

7) Design Is The Fundamental Soul Of A Man-Made Creation

In the mid-nineties, Microsoft was on top of the world, with a clear vision of what portability and cyber networks would mean for the computer industry. “At the centre,” said Bill Gates in 1995, “will be the idea of digital convergence, that is, taking all the information — books, art, movies — and being able to provide them on demand on what the PC will evolve into.” Here is what the PC would evolve into.

Steve Ballmer laughed about the iPhone, and was skeptical about the potential of iPads and other tablets, but turning concept into good design has been Apple’s strength. This is what Steve Jobs said about design: “In most people’s vocabularies, design means veneer. It’s interior decorating. It’s the fabric of the curtains and the sofa. But to me, nothing could be further from the meaning of design. Design is the fundamental soul of a man-made creation that ends up expressing itself in successive outer layers of the product or service.”

As Apple Inc. returned to profitability with a series of successful computers, PC loyalists liked to imply that Macs were merely entertaining toys, and that real work could only be 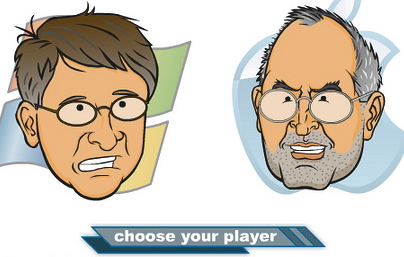 accomplished on a good old PC (scam=macs backwards). In answer to this charge, Apple aired a series of “John Hodgman as the uptight, bumbling PC and Justin Long as cool, reliable Mac (Give a listen to John Hodgman in Act One of ”

In reality, both systems have their shortcomings, as this YouTuber makes abundantly clear with his clever “Get a Mac” parody (though it must be said, his conclusion is lacking in nuance).

9) No Longer The Youngest Guys In The Room

That passionate brand rivalry has been fuelled by the big boys themselves. Both of them made snarky remarks over the years — Steve Jobs especially (as we saw in Cringley’s documentary — Part 3: 39:58, ouch!) — despite the interdependence of their two companies. Here’s the real Mac Guy and the real PC Guy, sitting side by side and being friendly with each other. As Steve Jobs points out, “PC Guy’s what makes it all work.”

Call them egomaniacal blowhards, ruthless capitalists, lucky bastards, or prophetic geniuses, Steve Jobs and Bill Gates are the two guys who did most to make us into people who are — as Marshall McLuhan quaintly put it — “with it.”

10) Your Gut, Destiny, Karma, Life, Whatever

Steve Jobs passed away in 2011 after battling cancer for eight years. The video tribute that would have most pleased him, the one most fitting to his character and style — it uses the soundtrack of an old “Mac commercial — is this one, made by Ken Segall, presumably with the help of iMovie.

Steve Jobs, you put a ding in the universe. RIP.