Nothing Covered Up – Part 2

“It’s a poor sort of memory that only works backwards,” the Queen remarked.
“What sort of things do you remember best?” Alice ventured to ask.
– Lewis Carroll , “Through the Looking Glass”

The record keeps spinning. World events fly past my mind like the cattle flying past Dorothy’s bedroom window in “The Wizard of Oz.”

Over the years growing up I began to see all the fallout from the Kennedy assassination. Conspiracy theories blossomed while the Cold War intensified and the Vietnam War raged on. The Watergate scandal legitimized an ever widening mistrust of government. The haze that seems to conceal the ugly truth of the wars in Iraq and Afghanistan is part of this fallout, along with our default paranoia.

Today we wearily recognize that the corporate mass media is diverting us from what is meaningful with bullshit about the sex lives of famous golfers. Paid pundits create noise and confusion like a smokescreen. But a smokescreen against which truths?

Conspiracy theories abound in crazy times, during economic slumps or after tragic events. The mind must find patterns to explain the things that upset the familiar order. Moving the bits around into a coherent narrative is a way of returning to the way things were before the tragic events occurred. Without explanations, we feel like leaderless soldiers fighting invisible enemies.

“Who’s the commanding officer here?” asks Captain Willard as they reach the last U.S. Army outpost along the river.

Was Oswald a secret agent? In his book, “Oswald’s Tale: An American Mystery,” Norman Mailer says yes but with an important qualification:

“…Oswald was a secret agent. There is no doubt about that. The only matter unsettled is whether he was working for any service larger than the power centers in the privacy of his mind. At the least, we can be certain he was spying on the world in order to report to himself. For, by his own measure, he is one of the principalities of the universe.”

But let’s turn to popular music. So often it manages to capture the hysteria released by big, tragic, shared events.

The practice of putting messages into records with reverse speech is called backmasking or backward masking. It became popular in 1966 with the Beatles’ psychedelic album “Revolver.” The Beatles used a process they called automatic double tracking to reverse instruments and vocals. John Lennon claimed to have discovered it working with producer George Martin while stoned on marijuana.

The poet Rainer Maria Rilke describes castle walls being breached in the story of Sleeping Beauty as a metaphor for the walls of society in times of war, famine and tragedy. They open like a husk of wheat and release a force of energy.

When the “White Album” was released in 1968, it was like a conduit for the primal forces that had been building up like gases below an arctic permafrost. Sudden climate change brought sudden release. The album was mined for hidden meanings and injunctions. Unfortunately, among those interpreting the music was Charles Manson. For him, the album was justification for mass murder: “Now is the time for Helter Skelter.”

Manson, like Oswald, was one of the warped products of the particular psychoses of that pocket of history. Today we have our own dangerous crazies, and an abundance of conspiracy theorists, including modern day backmaskers.

Backmasking freaks have figured out that if you play something backwards enough you are likely to find some sort of recognizable pattern.

The idea of subliminal messages has been hugely popular among conspiracy theorists since the 60s. Events are always the result of manipulations by one or more secretive powers, and those same powers can’t help but betray themselves—by accident or by deliberately planting clues. Legislation like the Official Secrets Act has ensured that difficult truths about the world remain secret, and for many of us, it is a given that it is used to cover up deception, corruption and embarrassing incompetence of every kind, and, as in the Arms for Iraq affair, to subvert the course of justice.

But are there people with such great powers? Are we right to have so little faith and trust in our governments? You can hear no answers in the rumble of the collapsing twin towers. There is no closure and nothing is ever conclusive. 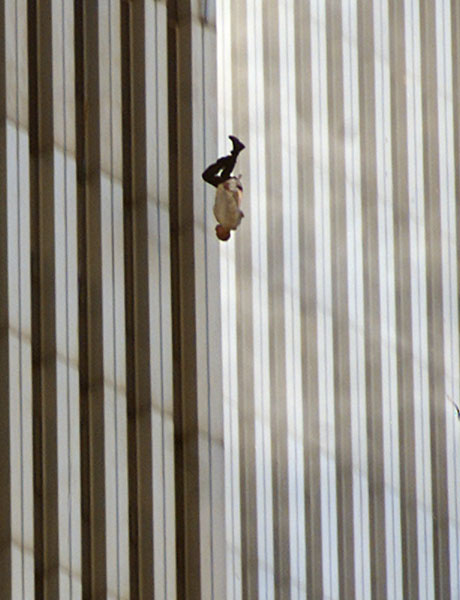 My record keeps spinning but now in the opposite direction; I seem to be coming back. I now see a man tumbling through the air, jumping off the tower of his own accord. The photo was taken by Richard Drew at 9:41:15 a.m., September 11, 2001.

What happened on either side of this moment in time? This picture offers only a glimpse of the truth, the edge of an entire story. The man was identified, but many of his family members chose not to accept that it was him. “He would never have done that.” Are they right?

I’m now back to watching “Popeye,” but it’s not the Popeye I was watching that day when history and a smoking TV interrupted. Out of the confused viral ooze of the world wide web slides a secret message. It’s the familiar Popeye theme song, but something has changed.

In “Moments of Being,” Virginia Woolf writes about all the time we spend in a semiconscious state, doing shopping errands or sitting at traffic lights. Then, she says, there are sudden flashes of insight and awareness when we see that “behind the cotton wool is hidden a pattern; that we—I mean all human beings—are connected with this; that the whole world is a work of art; that we are parts of the work of art. “Hamlet” or a Beethoven quartet is the truth about this vast mass that we call the world. But there is no Shakespeare, there is no Beethoven; certainly and emphatically there is no God; we are the words; we are the music; we are the thing itself. And I see this when I have a shock.”

We are also the images we replay time and again. We are the theories we imagine. Of the Iraq invasion, Tony Blair said: “I was wrong but I’m not to blame because I fooled myself I was right.”

What? What? Oh… Number nine. …Dead is Paul. Kachoo Koo Koo… Walrus the am I. 11/9. Attack under we are? East middle. War long. Conflict intensity low.

Change climate…. Obama deploys another 30,000 troops to Afghanistan and the insurgency only grows in strength.

Now it’s 2010 but I am still I am looking through the cross hairs of Oswald’s gun before he pulled the trigger on Kennedy. Now I am back at that moment when I was watching “Popeye” just before my TV caught on fire. I am standing on the grassy knoll and through the haze and chaos of reality I am standing alone and looking straight into the eyes of the unknown assassin.

Two Protest Songs, One Whiny, One Not

RSS Feed
Peter Lynch’s widely acclaimed work is often compared with that of Werner Herzog and Errol Morris. His first dramatic short, “Arrowhead,” received the 1994 Genie Award. In 1996, he made “Project Grizzly," one of Canada’s most acclaimed documentaries (referenced on The Simpsons!). These were followed by “The Herd” and “A Whale Of A Tale.” His 2001 “Cyberman” was featured at over 50 international film festivals, and listed as a top 10 feature film of the year by Film Comment. In 2018, he released a feature film called "Birdland."