Isao Takahata, “Scenes from Grave Of The Fireflies” (1998)

In the opening scene of the 1988 animated Japanese film, “Grave of the Fireflies,” a boy huddles against a concrete pillar in a train station. He is dressed in rags, and so exhausted and hungry that he passes out. A station attendant checks on the collapsed boy and pulls a battered tin of candy from his hand. He shakes it and we can tell by the sound that there is only one candy left, maybe two. A small treasure during hard times. In that moment, when we hear the rattling of that tin, we feel the entirety of this boy’s loss. Somehow, we understand all that he has been through. We understand that before the war, he had people who loved him, and now those people are gone. The candy tin tells us so. And the dull rattling is somehow the sound of relief, the promise of an end to his suffering. We hear that sound, and we can taste the sweetness of that candy, of times past. Joy and sorrow intermingle to form an even bigger feeling. It is like a heavy stone on our chests. Rattle rattle — and the stone sinks even deeper.

These are a couple of the ways that Wikipedia defines nostalgia.

“A sentimental longing for the past, typically for a period or place with happy personal associations.”

“A general interest in past eras and their personalities and events, especially the “good old days,” such as a sudden image, or remembrance of something from one’s childhood.”

In this clip from Pixar’s “Ratatouille,” the grumpy food critic Anton Ego experiences an involuntary pang of nostalgia, not unlike the narrator in Marcel Proust‘s “In Search of Lost Time,” who, when he bites into a madelaine, is suddenly filled with emotion. The taste of the madelaine, he realizes, recalls memories of morning tea with his Aunt Leonie when he was a child.

Here is Proust describing the power of taste and smell: “…when from a long-distant past nothing subsists, after the people are dead, after the things are broken and scattered, taste and smell alone, more fragile but more enduring, more unsubstantial, more persistent, more faithful, remain poised a long time, like souls, remembering, waiting, hoping, amid the ruins of all the rest; and bear unflinchingly, in the tiny and almost impalpable drop of their essence, the vast structure of recollection.”

This insight is not simply hidden away in the pages of Proust’s book. Advertisers have had a handle on it for a long time.

Nostalgia sells. For someone like me, better than sex. I’m an easy target. Growing up in my family home, at 4206 Kitchener Street in North Burnaby, nostalgia was more than just an emotion, it was a way of life. My parents, who immigrated to Canada in the early 70s, created a home that was as exemplary of post-war Japanese culture as any home you would find in the motherland. And so regardless of how happy and ostensibly successful we felt in our lives here, there was always this bitter-sweetness to everything. Always this manifest longing for elsewhere. And for the past. It would come up during dinner conversations, the recounting of how hard things had been in Japan when my parents were kids: The diet of cabbage soup and luxury of butter and sugar sandwiches, shining the flashlight down the outhouse to see how many worms they could count that day. Somehow these times past were far more meaningful than the present. For me and my sisters, it almost felt like we were never allowed to be completely happy because we hadn’t suffered enough. Happiness had to immediately be offset by the shadowy reminder of how lucky we were. We were lucky that the sacrifices of those who came before meant that our suffering was much less. And that obliged us to love each other more. 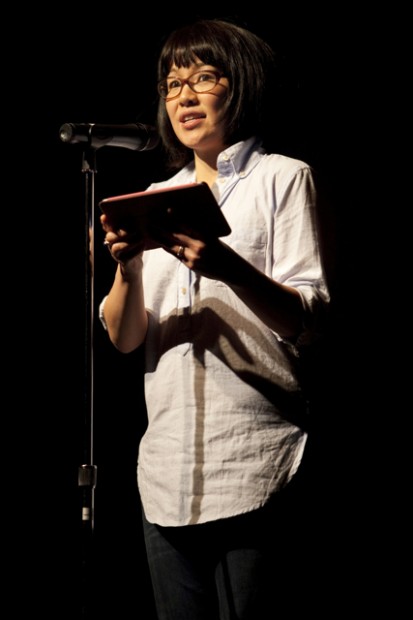 This is where I grew up. In a weepy land called Nostalgica.

Now, as an adult, I see that this inclination towards the sentimental, towards the weightiness and importance of my familial obligations, this is something my parents passed on to me. It’s a powerful kind of love. I have a button, if you will. It’s the kind of button that makes me particularly susceptible to Tim Hortons commercials. And just as in Proust’s notion of involuntary memory, I never know when I’m going to bite into my next little cake and be reminded of home, of that life of my childhood on Kitchener Street, of our lives under that low-hanging cloud of melancholy.

Another definition, this time from the Association for Consumer Research (the business of ACR, I should mention, is to better understand consumer behaviour): “Beginning with the writings of Johannes Hofer (1688), nostalgia has been associated with a myriad of physiological and psychological symptoms. Nostalgia as an emotion contains both pleasant and unpleasant components. This “bittersweet” quality of the emotion is a distinguishing characteristic of the nostalgic condition. . . . Nostalgia may evoke memories of peaceful, pleasant times or of times of tension and turmoil.”

Ok, admittedly, that commercial snatches unabashedly at your heartstrings, and almost any one of us, in the right mood, might feel teary-eyed. But in my case, I have to admit that I actively seek out this act of feeling. I want the catharsis. I want to feel messed up — I want to cry — and even though it feels a little dirty, I indulge myself.

Why? Here I am, a mother of two beautiful boys who bring me great joy. I have a loving husband and a job that I enjoy. My parents are a huge part of my life — of my family’s life. Why do I continue to shed tears at almost anything that evokes this intermingling feeling of homecoming and grief?

I don’t think there’s an easy answer. I think the answer lies somewhere in “the vast structure of recollection” that Proust wrote about. I can tell you that I sometimes wonder why I do not feel more deeply when I hear about a young man opening fire on a class of 6-year olds, or I read about a 23 year old woman who is brutally gang raped on a moving bus while people do nothing to stop it. I understand intellectually what I am supposed to feel and think, and I react to these horrors in the appropriate ways. But am I overflowing with tears? Am I having that stone sinking into chest feeling? I’m not, and honestly, this makes me feel a little ashamed, especially when in the next minute I’m crying over a manipulative TV commercial for life insurance.

But I know that when read about these victims of tragedy, some splinter of their trauma is recorded in my brain somewhere. And when I find things that give me access to these big emotions — triggers that help me to let it out, I am emoting along with a whole lot of other people. I go in search of these triggers, to remember that I’m not alone, there are people out there even more sentimental than I am — a community of sufferers. How do I know? YouTube. YouTube is one of my dealers when I need a hit. Here’s an example.

Whoever put that vid together knew exactly what I was looking for: the Josh Groban, the editing, and most of all, a lovingly interdependent parent and child involved in a sort of primal homecoming. That’s a good hit.

Surrogate parents will do the trick for me just as well. Cue the Aerosmith, have a shot of this one.

johnluvbaebo, “Reunited With Christian The Lion” (1971)

We understand, we feel, and for a little while that feeling is everything.

RSS Feed
Maiko Yamamoto: Since 2003, Maiko Bae Yamamoto has been an Artistic Director of the Vancouver-based performance company Theatre Replacement, a company she formed with fellow artist James Long. Past works include "Dress me up in your love" (2011), "WeeTube" (2009), "Train" (2008), "Yu-Fo" (2007), "BIOBOXES" (2007), "Sexual Practices of the Japanese" (2006), and "The Empty Orchestra," a love story powered by karaoke (2005). Theatre Replacement continues to present work both nationally and internationally. Maiko holds a BFA in Theatre from Simon Fraser University’s School for the Contemporary Arts.