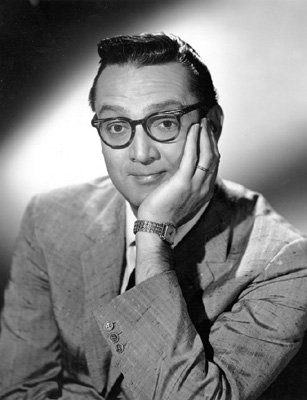 Everyone from Rosey Grier to Rachel Maddow has a strand of his DNA. Renaissance television man, composer, actor, writer and comedian, Steve Allen was an early progenitor of the television talk show whose format is so overly familiar to us today. We take it for granted that this is how talk shows were always being produced. Allen was the original host and creator of “The Tonight Show” (1954) and comedians Johnny Carson and Jay Leno eventually succeeded him in the standard talk show tableau of the chair behind the desk that has become increasingly more corporate and elevated, like that of an automobile salesman.

The 50s and 60s were the early, heady days of television before it became Nielsenized. Metrics cannot quantify genuineness or absurdity and it was Allen who established this protocol. His mother was a vaudeville comedienne so he came to performance naturally. The site gags, characters, guests, props, man on the street interviews, etc. are all formats that are still being utilized in everything from satirical news shows to CNN.

Allen hand picked most of his guests and in 1963 he invited a 22 year old who had two Harry Partch-like instruments that he brought with him to play onstage. The young man introduced himself as a composer who would be playing the bi-cycle. Allen and his band were invited to join him for the improvisational set. It would be another ten years before scatological gastronomic rumours would fly about this man with the big nose and big hair, who felt that these physical attributes let him do whatever he wanted, and who did not, as rumour also had it, urinate on stage. His name was Frank Zappa.

Allen was heavily into jazz, both as a composer, performer and listener. This translated into his being a proponent of, and creating a platform to introduce all kinds of experimental and avant garde movements in the arts to a relatively small and moneyed audience. Televisions like calculators were very expensive when they were first introduced to the consumer market.

Keenly aware of a shifting intellectual and ideological condition, Allen would describe himself as a secular humanist. The clips with Zappa document his prescience.

He was a genius at comedic timing and always made it possible for his audience to be able to engage with his guests, be it Fats Domino or Lenny Bruce. The necessity to keep the audience laughing with him, while simultaneously at him, reflected his acuity and an intentionality to be perceived that he too, questioned the choices in programming that he made. As Swift noted about drinking those gassy satiric waters, you can look through them and laugh, but then you notice your own reflection in the glass and you are only laughing at yourself.

Costumed in what today’s style is bespoken–Thom Browne slim suits and ties–it would not be far fetched to fantasize that Allen could have been the manager of the employee Frank Zappa at the same insurance company. These are jobs that they would never be hired for, or be able to keep. We hear Allen’s comments that allude to this fact: “With this type of programming, we all might be out of a job, if we even had one to begin with.”

As Zappa stated about occupations,  we all really end up with only one job and his is to  “extrapolate everything to its most absurd extreme.”

Extremism is something that Allen attempted and accomplished in the crafting of his uproarious and unpredictable skits and characters. A half century makes a significant difference when we consider the meaning and usage of the word extreme. Like Zappa, he too, did what he wanted.

Given the level of programming and content we see today on TV, it makes these reruns of “The Tonight Show” appear even more brilliant and outrageous than the remakes for the ‘original’ programming the networks are currently airing. (Cable gets a very narrow pass at the moment.)

As Allen notes at the end of the 16 minutes he spends on-air with the shy, dry humored and youthful Zappa, about to break for commercials, “we may have a few other surprises, even to me.”

Why is it always surprising that watching someone laugh makes us laugh?

Allen’s ability to laugh at himself was paramount to the success of the show and we see this in an early episode from the late 50s when he portrays the sportscaster commenting on college baseball—”Bill Allen” (named after his son who was named after his father’s vaudeville name).

In an infectious, laughter inducing, unscripted moment, he sets a record. This record is for the duration of his crack-up. It begins when Allen sees himself in the monitor while he is on-the-air and becomes self-conscious about his appearance. He is even surprised by this himself, and it induces an uncontrollable fit of laughter. It then makes the audience laugh and they become surprised at how they cannot stop laughing because they do not know when he will stop laughing. We are regifted with over a minute of Allen’s laughter.

His physical response to his appearance is the humor itself, and that provides the necessary element of the illogical to make both himself and ourselves laugh.  We even become surprised at our own laughter at watching both Allen and the audience laugh. Extreme absurdity.

Allen also understood that anything that can be broken will have a built-in audience. Sports and sports figures, records and duration— were all recurring themes in Allen’s comedic sketch work. He refined and utilized emulation, observational humor and intelligence that in today’s genres of comedy would appear in the guise of Demetri Martin or even Jerry Seinfeld. The ‘scat and dick’ school of Judd Apatow or Mitch Hedberg, both of which can be categorized as funny, have almost no sense of the temporal in their delivery and the ‘haha-aha-ness’ of the response.

Allen was critical of this genre and the “Howard Stern‘s of comedy” because he thought that shock humor was all too easy and there was little, if any thought at all involved. It degraded their occupation.

The success of Martin and Seinfeld’s work is that they don’t appear to be telling you a joke immediately, you have to ponder what they are saying. Like a palindrome, something Martin is an expert at, you have to unpack what he is mirroring in our absurd, day-to-day lives.  It is similar to a game of telephone, in that what he is telling you is not necessarily how it is understood.

It is quite possible that contests or the game show genre could trace their origins back to the staging of early sporting events.  Allen also had a role to play in this genre as the host for one of the early contest series, “I’ve Got a Secret,”  from 1964 until 1967. The show was set up as a guessing game between a contestant and a panel who would try to determine what the secret was that the contestant had.

The secret could be something that had to do with a person’s occupation, their being a witness to something—historically significant or not, an unusual hobby or business, or something that happened to them that no one knew about. The contestant would enter and Allen would introduce them and state their home town to the panel. The contestant would then be asked to whisper their secret to the host. The secret would be flashed on the screen to the television audience.

The panelists would then proceed to individually question the contestant in an attempt to uncover the secret or they would be unable to discover what the contestant’s secret was and it would be the host that would reveal it to the panelists.

On November 9, 1964,  Jim Marshall, a “Purple People Eater”  and defensive end who played for the Minnesota Vikings appeared on “I’ve Got a Secret.” His secret was one of the most embarrassing moments in sports history.

The secret: On October 25, 1964, in a NFL game against the San Francisco 49ers, Marshall recovered a fumble and ran the ball 66 yards to score a safety for the 49ers. He had no idea where he was when he exuberantly spiked the football down into an expression of triumphal accomplishment because he thought he was in the right end zone and had scored a touch down for his own team, the Minnesota Vikings.

The footage of this mistake is one long, continuous take with one camera that is filmed from a position in the upper part of the stadium. At a certain point in the take, we see only the frame filled with Marshall  running across the green field as the yardage markers tick by. When he reaches the end zone we see the moment when he realizes his mistake and he bows his head down in a posture of embarrassment and humiliation.

Marshall went on to have one of the most illustrious careers in NFL history as a defensive end and ironically, he still holds the NFL record for recovering fumbles at a count of 30.

Following the questioning by the panelists of the contestant and their discovery of the secret, the footage of the play was aired with Marshall  and Allen watching the replay together. Their response to the all-too-human mistake was a civilized laugh shared, one that we replay over and over again.

RSS Feed
Mary Ellen Carroll is a conceptual artist living and working in Houston, Texas and New York City. She is the recipient of numerous grants and honors, including a Guggenheim Fellowship, a Rockefeller Fellowship, a MacDowell Colony Fellowship and a Pollack/Krasner Award. She was awarded a fellowship from the Pennies from Heaven Fund, for her contribution to New York City as a visual artist for work that is advanced, experimental, and socially visionary. Carroll teaches architecture at Rice University in Houston, Texas, where in 2009 she realized Project Prototype 180, a work of art that aimed to make architecture performative by inverting an acre of land and the domestic structure that is on it 180 degrees. Her work has been exhibited at numerous galleries and institutions around the world, including the Whitney Museum of American Art, New York; the ICA, London; Museum fur Volkerkunde, Munich; the ICA, Philadelphia; MOMUK, Vienna; and the Renaissance Society, Chicago. It also resides in numerous public and private collections. "Mary Ellen Carroll" is published by Steidl/Mack. For more MEC, go here.