Did I think it would be easier to have Ralph Macchio if I were him or if he were me? Was I looking to fit by looking alike? If so, was looking alike the desire to mend deeper schisms? Macchio’s short-lived iconic status was rooted in his ability to endure disapproval and rejection through the very source of his chastisement—his body. As a centrist movie about binaries—inclusion and exclusion, inside and outside—“The Karate Kid” portrayed all the discordant socio-cultural elements that plagued my own childhood.

I could relate to watching Daniel (Ralph’s iconic character) get the shit kicked out of him, his mouth packed with sand by a gang of rich blonde villains on his very first day in perfect-California, followed by a black eye two days later.

The blonde villains had no problem annihilating Daniel. In fact that was their goal. The 80s were live or die when it came to cultural archetypes. During the movie’s crucial (Halloween) beating before the tournament finale, Daniel is almost gang-bashed to death. The hawkish quintet sports skeleton costumes. Not only does the death troupe signify death, but as symbolic cadavers they also signify the dead body of Daniel.

In a 1984 Washington Post article titled, “Blond and Bad: The Advent of the Preppie As Screen Villain,” Rita Kempley writes, “inevitably, blonds became the establishment villains. The trend represents more than the ancient rope-tug between haves and have-nots. ‘It’s the reemergence of the American dream,’ says Richard Stephens, sociologist at George Washington University. ‘We’ve had such bad world press on our divisiveness. It’s a calculated thing on the part of the producers to show the other faces of America.’” 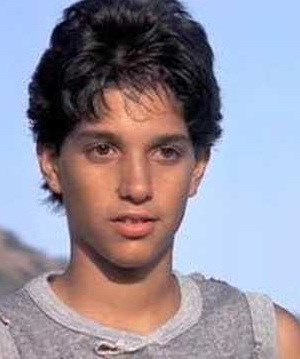 When Daniel and his mother pull up to their new home, Daniel is told to “Wake up.” Then the camera crawls into the car to watch him sulk. The dream, which is a nightmare, begins. To Daniel’s mother, the fairytale is launched the moment they step on to California soil (“Welcome to paradise,” she tells Daniel), introduced by a triptych of sky-high palm trees. But California Dreamin’ isn’t for slight, working-class, ethnic boys raised by single mothers, especially not in the 1980s—the decade of the hard body and the rich blonde villain. Like a movie role, the best parts are only doled out to certain kinds of people (“Those are the breaks,” Daniel says later when he doesn’t make the rigged soccer try outs).

To Daniel, the command “wake-up” is the unleashing of class-based dread. Just as he suspects, “paradise” is a rundown, motel-style dump in Reseda, and the luxurious pool in the brochure that his mother’s been luring him with is all dried up. A saggy rubber swan lies at the bottom of it, shipwrecked. In a matter of minutes, the aspirant dream is deflated. After that, things only get worse.

Possessing and being possessed by Ralph, reminds me of what another Masha (played by Sandra Bernhard) does to Jerry Lewis’ talk show host, Jerry Langford, in Martin Scorsese’s mass media satire “King of Comedy,” where, argues film scholar Robin Wood, obsession with celebrity is Oedipal due to the celebrity’s “prestige and authority.”

Wood calls this the desire to be in “Father’s shoes,” for father, in the symbolic sense, signifies ultimate acclaim. Held hostage by Robert De Niro’s fame/father hungry Rupert Pupkin (a name that has the longing for kin-ship built into it) and Masha, Bernhard serenades a taped-up Langford with “Come Rain or Come Shine.” “You’re gonna love me/like nobody’s loved me,” she purrs, or in my case, by being Ralph, I was gonna love me/like nobody loved me.

Similarly, in the movie “Marley and Me,” Marley, John’s (Owen Wilson) beloved dog and confidant is really John. The restless, rootless John is never sure that his life has meaning, so whenever he tells Marley

that he loves him, that Marley’s life means something, that Marley’s life holds infinite value and purpose, he is really saying that his life has value and purpose. And when Marley is put to sleep due to old age, and John whispers into Marley’s ear, “I love you more than anything” (more than even his wife and children apparently. The film’s title alone suggests the family’s exclusion), John is really saying that he loves himself—his primal, infantile, unsocialized self—more than anything.

“The Karate Kid” is of course an Oedipal drama too. Mr. Miyagi, Daniel’s Karate sensei and savior, becomes the father symbol Daniel’s never had and desperately needs in order to survive in the world. The film makes it clear Daniel has no use for his mother. He cannot acquire approval or social status if he remains fatherless (both “denial” and “lead”—which without a real father, Daniel cannot do—are anagrams of Daniel). Miyagi doesn’t just teach Daniel Karate, he teaches him everything.

Even though Mr. Miyagi is a Japanese immigrant (an outsider) and speaks broken English, some father, the film insists, is better than no father, or more specifically, father is always better than mother. And yet, with Miyagi as surrogate father, the father deal is never really sealed, forcing Daniel to limbo in and out of power in the movie’s ongoing Oedipal nightmare (see “The Karate Kid II” and “III”).

In my six-year old mind Ralph and I weren’t strangers. But when it came to the exact nature of my relationship with him, I didn’t know what to call it. Was I just a fan?

In his book, “Celebrity,” sociologist Chris Rojek points out that the physical remoteness of the star is “compensated for by the glut of media (fanzines, press stories, TV documentaries, interviews, newsletters and biographies), which personalize the celebrity, turning a distant figure from a stranger into a significant other.” Given that I was generating some of the mass media myself by reshaping what I’d seen and read into my own yarn, and in the process concocting the self (“I”) I wanted Ralph to possess, I was acting as one of the cultural intermediaries in charge of Ralph Macchio’s personality, for I literally wrote him into my life.

Years later, while traveling through Mexico one summer after a bad breakup, I ended up in a video store in San Miguel de Allende one night with a group of people. Half-drunk, we were a motley crew who spoke 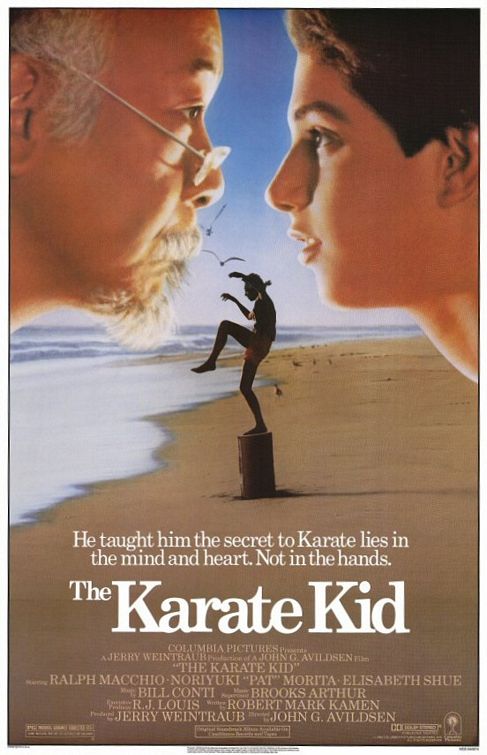 different languages and barely knew each other, so no one could agree on what to rent. As I split off and walked around a sea of banged up video titles, I came across “The Karate Kid.” I hadn’t watched or thought about it in over a decade. I studied Ralph Macchio’s brown face suspended and disembodied, like some big moon, over the Southern California Coast line and started laughing. Sarah, my best-friend, walked up to me and asked what was so funny. “I look just like him,” I told her. “We’re identical and I’d never noticed that before.”

When I was eight I found out that Ralph Macchio was making his theatrical debut in “Cuba & His Teddy Bear” at the Joseph Papp Public Theater in New York City. Written by Reinaldo Povod, a 26 year-old Hispanic playwright raised on the Lower East Side, the play starred “Rocky’s” Burt Young (directed by John J. Avildsen, who also directed “The Karate Kid”) and Robert De Niro in his first stage production since 1970′s “One Night Stands of a Noisy Passenger.”

When the off-Broadway run of “Cuba” sold out in three hours, the Public Theater started selling closed-circuit tickets. The play became “filmed theater. That ideal point,” writes film historian Richard DeCordova, “at which the theater and the cinema…seamlessly merge.” Watching Macchio on a surveillance camera in another room added a layer of voyeurism I was familiar with and rivaled the secret feeling I’d always had of wanting to catch an actor in the act. There was no editing room to alter anything Ralph did. No cuts. No body doubles. No special effects. It was profilmic. I was watching raw footage. Unlike a movie, the play, even in closed-circuit, would take place in real time, and this meant Ralph and I would be in the same building, together, while it was happening.

My mom and I watched the live TV play upstairs while the actors performed onstage below us. An old hardwood floor replaced the barrier of the screen. I was getting closer and closer. After the show was over, I figured out that I could wait for him in the lobby if I wanted an autograph. I was the only kid in the theater. I was also the only audience member left in the building after the play ended. No one had even stuck around to meet De Niro, who at that point, I knew only as the Devil with the trick name—Louis Cyphre (Lucifer)—from “Angel Heart.”

The play finished at midnight. I asked my mom to wait outside while I sat on a long wooden pew-style bench with the playbill in my hand, along with the pen she had given me. I had a Louise Brooks-style bob and I was wearing my mom’s non-matching silk blouse and skirt.

When Ralph finally came out, he was—amazingly—alone. No entourage or bodyguards. Just Ralph. Just me. His hair was wet and he had a white towel around his neck like he’d been swimming. I handed him the playbill and he asked my name. I said, “Maria” because it was easier to pronounce than “Masha,” but also because it sounded Italian. Like him, not like me (I’d switched over to Maria in second grade because Maria, my full name, sounded culturally neutral and was easy to pronounce, unlike Masha).

Ralph was quiet and sweet. It was just the two of us. On my playbill, he wrote, “Maria, all my love. Ralph Macchio.” Later I drew a heart around his face and the messy inscription below it. Two years ago, while digging through some boxes in my parents’ basement after a flood, I found the moldy playbill still intact despite all the water floating around it. In it, Ralph’s black and white face is disembodied, just like on the “The Karate Kid” poster.

Today the playbill is in a zip lock bag in my apartment, stiff as a board. I look at it for laughs. Of course, it locates me more than him. I’d found a way to condense and autograph my own essence. To serenade myself. I might as well have written across my own face, “Maria, all my love.” More specifically, “I’m gonna love me/like nobody loves me.”

In “The Beaches of Agnes,” Matthieu Demy, son of French New Wave filmmakers, Agnes Varda and Jacques Demy, stars in one of his mother’s films as a child, and says, “If I’m not happy, what’ll we do? If he’s not happy, what’ll I do?” He speaks on the behalf of adults.

The following year, I managed to get actual Broadway tickets to “Cuba & His Teddy Bear.” Before the play my mother made lasagna and lemonade, which I ate and drank in Ralph’s honor. It was November, sometime around Ralph’s birthday. I brought a teenage friend along to see the show. A girl I’d coaxed into loving Ralph just like I had been coaxed into loving him.

RSS Feed
Masha Tupitsyn is the author of "LACONIA: 1,200 Tweets on Film"(ZerO Books, 2011), "Beauty Talk & Monsters," a collection of film-based stories (Semiotext(e) Press, 2007), and co-editor of the anthology "Life As We Show It: Writing on Film" (City Lights, 2009). Her fiction and criticism has appeared in the anthologies "Wreckage of Reason: XXperimental Women Writers Writing in the 21st Century" (2008) and the "Encyclopedia Project Volume II, F-K" (2010). For more Masha Tupitsyn, go "here.