Presented on stage by Michael Turner at Ryeberg Live Vancouver 2012. 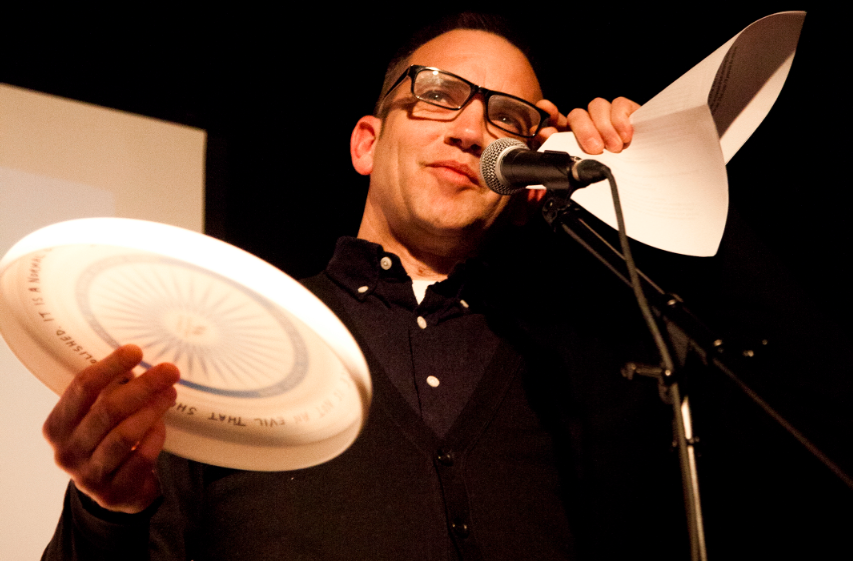 “Distance is not an evil that should be abolished. It is a normal condition of any communication.” — Jacques Ranciere, “The Emancipated Spectator” (2004)

In the 1930s, college kids in Bridgeport, Connecticut began to play catch with pie plates from the local Frisbie Pie Company — spelled F-R-I-S-B-I-E. When the Wham-O Toy Company released its first plastic flying disk in 1957, called “Pluto’s Platter,” Bridgeport kids referred to it as a Frisbie. Wham-O took notice, and the following year re-introduced the disk under the name Frisbee (F-R-I-S-B-E-E), unintentionally misspelling the name of the Bridgeport pie company.

Here is the Frisbee eight years later, in 1966.

The kids in this ad are in their early-twenties. They continue to do with the Frisbee what we saw in the previous ad, only now they are doing it without their parents, at the beach, and at a greater distance from one another.

Here, the generic happy music has been replaced with the music of the mid-1960s west coast youth experience: surf rock. The voice-over has been reduced, and longer shots have been dropped for shorter, snappier edits. Playing Frisbee is what you do – what affluent white people do — in addition to surfing, chatting with friends, or sitting around listening to someone play the guitar. And there are different kinds of Frisbees, “regular” and “professional.”

Next is the Frisbee eight years later, in 1974. Not a TV ad but a promotional film, the kind shown to sales reps while someone from marketing intones into a microphone, like Steve Jobs used to do. This time I’ll provide the voice-over.

Note the double-exposure, the melding of bird, sun flare and Frisbee.

Note the use of slow-motion.

Note the bikini – and that it is a white bikini. And that the woman is blonde.

Note the stagger effect on the blonde guy throwing.

Note the introduction of a new guy, an older guy. He too is staggered, but more dramatically.

Note his tricks, his athleticism.

Note the close-up on the woman, her far-away eyes.

Note the newer guy. Watch how he throws away the Frisbee – for the new girl.

Note how far removed we are from the first girl, the first guy. The temporal distance.

Note the return of the first guy, his athleticism.

Note the return of the bird and the first girl.

Note the darkening sky, how the Frisbee stands in for the setting sun.

Like the previous ad, Wham-O’s promotional film is not about the product but the lifestyle that goes with it, a marketing trend that began in 1963 when advertising executive Alan Pottasch introduced the “Pepsi Generation.” And what is that lifestyle? Implied by the film’s camera work, post-production effects and stoner soundtrack is another product, one that, like those round table scenes in “That 70s Show,” can only be alluded to.

I am attracted to this film for its calm, contemplative nature. I am also interested in the year in which it was made. Nineteen-seventy-four was the end-stage of an American-led world economy that had grown unabated since WWII and whose stagnation continues to this day. Could the film’s slo-mo effect be read as an inadvertent attempt to hang onto that last wave of expansion? An American idyll? Or is the lifestyle it depicts a justification for those Americans who support a deregulation of government that began in 1976 with the election of Jimmy Carter (and continued through the Reagan years) and resulted in, amongst other things, a reorientation of public space – not only of parks and beaches but within our cities’ downtown cores?

This next video is of an Ultimate match. Ultimate is a low-impact, competitive team sport that requires not a Frisbee but the Ultimate’s own trademarked disk. The first Ultimate tournament took place at Yale University in 1975, and today the game registers over five million players. In this video we will see an example of what is known amongst Ultimate players and fans as the “Greatest.”

The final video is a 2007 ad for Cell C, the third largest cellular network in South Africa.

In an effort to be more competitive, Cell C spent a great deal of money on an advertising campaign that has the invisibility of cellular communication represented through the use of a Frisbee, or disk. Worth noting is that the thrower and the receiver never see one another, and that their interactions take place not in a park or at a beach but in the city’s downtown core.

The Frisbee has travelled great distances since its introduction over fifty year ago. In tracing its journey I am reminded of the changes I have seen in my lifetime and the importance of remembering. As the novelist E.M. Forster once wrote: “Only connect! … Live in fragments no longer!” I would like to think the same could be said of historical knowledge – bridging the distance between past and present, not to mention the distance between ourselves and each other.

What Nazis Watched Over Dinner

On Remaining Open To Suggestions

RSS Feed
Michael Turner is a Vancouver-based writer of fiction, criticism and song. His books include "Hard Core Logo," "The Pornographer’s Poem," "Fred Herzog: Vancouver Photographs" and "8x10." A frequent collaborator, Turner has written scripts with Stan Douglas, poems with Geoffrey Farmer and a libretto with Andrea Young. Curatorial projects include “To show, to give, to make it be there: Expanded Literary Practices in Vancouver, 1954-1969" (SFU Gallery) and "Letters: Michael Morris and Concrete Poetry" (Morris and Helen Belkin Art Gallery, UBC). For more Michael Turner, go here.