It turns out that all those years of thinking about my romantic destiny meant not thinking enough about making money. Now I am left with none. It’s shocking to discover, but the less money you make, the less you have. And when you have a lot less money than you used to have, it’s a surprise to find oneself coveting — like a necklace in a Tiffany’s window — a $3.50 jar of marmalade. Should I buy it? Buy it! But it’s just sugar. It’s not sugar; it’s orange peel — it has Vitamin C! 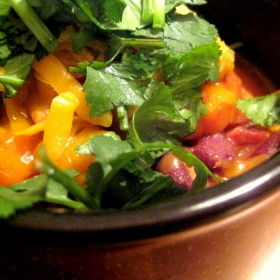 I didn’t buy the marmalade. Instead, I turned to food photos on the Internet, gazing at them longingly while eating soda crackers (cheap!), hoping what I saw would enhance the taste of the food in my mouth. First, I turned to Food Gawker. The pictures were fantastic, but there was a problem. I was using my hands to feed me; I could not simultaneously scroll down the page. So I turned to YouTube: I would watch slide shows of food while eating!

The people who made the only food videos I could find — like the videos below — were not like the people at Food Gawker, who really are gourmands. They were people with eating disorders — anorexics, sometimes bulimics — people who understood themselves to be hurting their bodies, yet could not bring themselves to eat. They created these slide-show videos of food to share with fellow-sufferers, to remind them what of what they were missing; to inspire the eating-urge, to stave off starvation.

The odd thing is — and perhaps this should be expected of people who have lost all appetite and, I imagine, now connect pleasure with self-denial – the videos are completely repulsive. They do nothing to stir the taste buds. They are not enticing one bit.

Then, there is no narrative cohesion: There is no move from appetizers to entrees to desserts. It’s just a parade of food, indiscriminate: French onion soup followed by marshmallow cakes, then brownies, then croissants, then rigatoni.

The videos, more than anything, make apparent the way an eating disorder takes away the meaning of food. Food, for most eaters, is tied to ritual. It’s tied to times of the day and occasions: one no more eats rigatoni at breakfast than Easter eggs on Shabbat. But any ordering, classifying or hierarchy is obliterated here. Food is simply classified as Food, as though actual foods have no unique meaning.

Watching these videos made me want to vomit. I realised how important it was that eggs come in the morning and that chocolate comes twice a day — no more. I never before understood that a love of food is tied up with a love of the meaning of food — that, in part, for civilized, healthy humans, love of food is love of meaning.

As for all that time spent thinking about my romantic destiny, it now looks to me like a slide show similar to these videos: One random hope after the next, set to some dismal tune. Now when I flip through the romantic images that seared my brain these past few years, I feel turned off by the idea of a romantic destiny.

I can see my daydreams from the outside: I once thought my fantasies were full of meaning — the most meaning. But in their gaudiness, relentlessness, and absolute lack of order, it was the reverse. They were the fantasies of someone who had lost the thread; who had withdrawn from the genuine love of specific people.

I thought I had crafted my fantasies to entice me toward love, but perhaps, like the people who made these nauseating videos, I actually sculpted them to be unappetizing. Just as they actually don’t want to eat, I wanted to be led not to love, but away.

May 15, 2010
All, Internet Culture, Sexuality & Relationships, The Arts

RSS Feed
Sheila Heti's latest novel is "Motherhood." She is also the author of "The Middle Stories," "Ticknor," and "How Should A Person Be?" —  chosen by The New York Times as one of the 100 Best Books of 2012. She's also published an illustrated book for children, "We Need a Horse," featuring art by Clare Rojas, a book of "conversational philosophy" called "The Chairs Are Where the People Go," with Misha Glouberman, and, as co-editor, a book about what style really means, called Women in Clothes. More Sheila Heti here.