Presented on stage by Russell Smith at Ryeberg Live Toronto 2010.

Well, I am sick of preaching to the converted. So what I’m about to do you might call biting the hand that feeds me: I am bringing my condemnation of hipster culture right here into the belly of the beast, into hipster ground zero.

Bear in mind in your no doubt angry response that I am outnumbered here; I am performing this act as a kind of self-sacrifice, a self-immolation for the sake of art.

My first exhibit, my best example so far of the emptiness and self-indulgence of hipster culture, is this music video.

You may recognize this song as the dance hit by the pop star Lady Gaga, whose multimillion dollar video of the same song was playing as we all filed in here. (You may also know that Lady Gaga’s videos have been much discussed on Ryeberg, after a brilliant disquisition on them by Mary Gaitskill, which is partly why I thought I would prolong this particularly Ryebergian fixation this evening). And this performance of it – as all you bearded and spectacle-wearing types no doubt already know — is by a California-based group Pomplamoose.

And yes, even the humour in their name annoys me. Why grapefruit? Is that funny in itself? What’s the pun? What’s the point? Does everything have to be silly and meaningless? But anyway, that is but a small reason to despise them when there are so many other more powerful reasons, which I would hardly need to enumerate to a non-hipster audience but I will try to do as quickly as I can here. 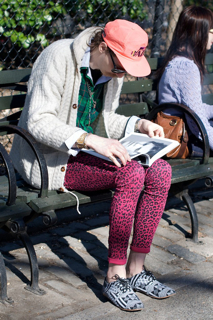 First, who are they? Pomplamoose is a popular and expertly contemporary group; they have hit on a brilliant way of selling their music in the digital age. They record music in their own house, and they do it dressed in the fanatically comfortable clothes of the hipster – the clothes that must all look like pyjamas – not that this is at all important to my judgement — and they post videos of the performances on YouTube and then sell their songs from MySpace as MP3s. No CDs, no distributor, no middle-man, iPod ready.

In what way, besides that, are they perfectly representative of hipster culture? Well, it’s not just their clothes. They do compose and record their own music, which is sort of cute and quirky folk-jazz-twee-pop that sounds very much like this, and they did have one big original YouTube hit (it’s called “Hail Mary”). It’s a very nice song, and if you’re a nice person you’ll probably like it. It belongs to a genre I suppose one could fairly call Vegetarian Rock. You can smell the fair-trade coffee from the screen). But that’s not actually what they are best known for, not actually why you all probably found the first YouTube link in your inboxes with the attached note: “Check these guys out! Hilarious!”

They are best known for doing these covers of pop songs, particularly by big stadium mainstream performers. Their most popular compilation is called “Tribute To Famous People.” What they do is they take a massive dance tune – something by Lady Gaga or Beyonce or Michael Jackson – and they wimpify it; they bring it down in scale till it’s a plaintive, wispy little sing-along.

Here’s another example: Here’s possibly the most pretentious version of “Beat It” ever recorded.

There is pervasive irony here: they are taking the most mainstream (i.e., uncool) of music and translating it into another aesthetic, one that privileges the small over the big, the homey over the polished, the gentle over the aggressive. What they are doing musically is stripping out all the elements that made these pop songs fun and popular: they have removed the buzzy, booming, abrasive aggressiveness that made them sexy. 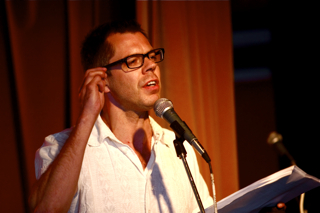 Are they mocking those songs then? I don’t think so – I think they honestly think they’re improving them. There is a smugness about this that is a reflection of hubris. And of course they’re benefitting too, even while being superior, from the massive popularity of these uncool songs. Jack Conte, the guy with the beard, has made superior comments in interviews about countering “fake” music culture, and reviews have praised them for being grassroots and the opposite of slick. So of course they carefully cultivate the unaffected, in a massively affected way.

The singer, Nataly Dawn, has perfected that wide-eyed surprised naïf look that you may have noticed she puts on every two seconds that’s about as natural as Lady Gaga herself. And then they add, in the most nauseating touch of all, outtakes that show the two of them joking together, or, here, at the end of this video, eating.

So down to earth! So adorable!

Okay, but seriously it’s not just their clothes and their posturing that annoys me. On an artistic level, they are perfectly representative of hipsterdom because of their fixation with other people’s music – with the idea of a cover, a remix — that’s significant. This is what is so contemporary.

And they have to be well aware that their rendition of the “Telephone” song comes to the YouTube viewer as part of a torrent of other personal remixes and private performances of that same song, most of them humorous or ironic in nature. We have all at this point probably seen the far more entertaining US army in Afghanistan version.

The army video is at least understandable as purely ironic, even sarcastic. And for that reason it’s strangely more pleasurable that the brilliantly musical interpretation of those two talented but sadly artistically dull serious musicians. It doesn’t have any archness, it doesn’t inhabit the grey zone of semi-irony of hipsterdom.

Why does Pomplamoose continue to focus so on covers of mainstream pop songs? Well, this is pretty much the definition of a certain kind of postmodernism: The idea that there is nothing original in art, that everything is a reference. And that every perception is filtered through a haze of mass culture, the omnipresent noise, so all art might as well be about, in some way, Beyoncé and MacDonalds. And that there is no difference between a parody and an homage, that one laughs at everything one admires anyway, that irony is so unavoidable that it is impossible to differentiate from seriousness.

There is something defeatist and basically not brave about hipster post-modernism – and this goes for the domains of visual art and literature too. If you claim to believe that there is no possibility of original art in an age of reference, you are cleverly avoiding the nauseating stress of being original. It’s too easy. And you shouldn’t believe it, either, because it’s not true.

Artists in every era have faced the terrifying pressure of what has already been done, and every age has had its revolutionaries. An artistic culture so focussed on pastiche as our own can start to look nihilistic.

This, then, is my plea, my injunction, my exhortation: Come on, hipsters. I really don’t care what you wear, honestly I don’t. And I don’t really want you to die. But I want you to get brave, artistically.

Get out of your living rooms.

RSS Feed
Russell Smith's novels include "Girl Crazy," published by HarperCollins Canada, and “Muriella Pent” — named best fiction pick of its year by Amazon.ca, and nominated for the Rogers Fiction Prize and the Impac Dublin Prize. He lives in Toronto.
Author photo by Jowita Bydlowska.