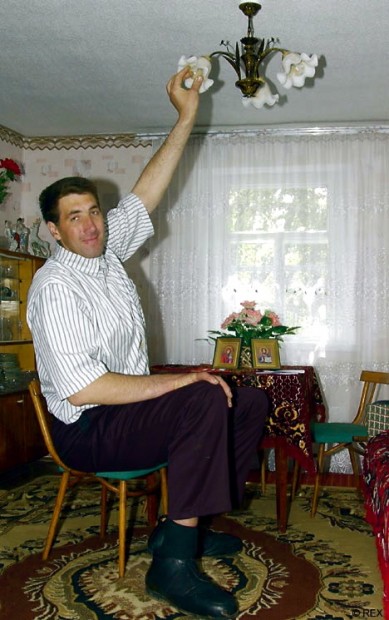 I first came to know about Leonid Stadnyk a few years ago. A story about him had gone out through the Associated Press, and had been picked up by all kinds of local newspapers. The stories were relatively short, with a description of his life and his troubles, quoting the man himself, often in the headline:

“God is Punishing Me.”

Some of the other headlines read “World’s Tallest Man Says It’s Lonely at the Top”, “Giant Lives Large: Only Fits In With His Plants”, “Ukrainian Giant Keeps No Mirrors In His Home”, and “Too Tall To Be Happy.” One of the stories closed with an anecdote about how some of his neighbors arranged for him to visit a nearby mountain range, so he could see something “even bigger than he was.”

At that time, I would ride the subway to university, or to my job, which was at the university’s archives. I had access to many newspapers and news sources, and spent plenty of my time combing through papers. Every so often a story would strike me as a shiner, either by a few careful turns of phrase, or some intimate personal content. I preferred mundane stories where the main event was a small surprise encountered by the subject. Stadnyk’s story jumped out at me and I felt attached to it immediately. I felt like I was meant to see it. More than one friend even sent it to me, thinking of me when they had read it themselves.

You can see here, Stadnyk in his home and surroundings, trying to use a cell phone, and a few of his simply stated comments about his life.

I felt a guilty pang with my interest and pathos. Stadnyk’s story when told entirely free of frills was humbling, and moving, certainly for any reader. Why did I feel an extra sense of purpose about it, what was my problem? I was not a man living in rural Ukraine. My grandmother, now deceased these past three years, who I was very close to for my whole life, came from a family from just outside Kiev, and I identified with her family as my family. Still, that was remote, and more of a pet detail of ancestry. I am a very average-sized person. When I was young though, I was not. I grew to be my full adult height when I was about ten or eleven, 174 cm, and looked like an adult. When I was 13 I bought 19+ concert tickets with no questioning. People thought I was just very immature or dim before they knew my age.

Still, this is nothing. I was never so big that I couldn’t fit into my own surroundings. A pair of pants, maybe. To a man handing out free Super Mario Brothers macaroni and cheese boxes after a kids’ movie at the theatre, saying “under 16 only, under 16 only,” when I was nine years old, not giving me one? Sure. However, the experiences are far from analagous.

If there was a better purpose behind base freak show appeal to the wide distribution of Stadnyk’s story, it would have been to call to attention that he had needs that were not being met. It seems, from the bits of news footage I have seen, that the dispersal of information provided a few balming antidotes here and there. Viktor Yushenko himself presented Stadnyk with a specially augmented car, so he could travel.

And here, a special exercise machine, and a bicycle, plus the important data that Yushenko, along with the car, gave him two track suits.

Russia Today, “No Shortage Of Problems For World’s Tallest Man” (2008)

You’ll notice of course, that near the end of this last video, the mention that Stadnyk keeps busy in his garden. There is also mention that he maintained hopes of one day finding a soul mate.

Love is hard for any person. Finding someone to love, who will love you back, feels so rare that when it happens, the sensation created in the mind and body is nothing short of miraculous. Vocabulary defaults to the sublime when we try to talk about the feeling of this occurrence between two people: incredible, amazing, awesome, he or she is one in a million, it feels like walking on air. We talk about immeasurable lengths of time: forever, eternity, always. We talk about a feeling of completeness, and speak in absolutes. That’s pretty big.

I didn’t wish to be Leonid Stadnyk’s woman; I was not so deluded to think that I was his answer. I did wish someone to be, though.

I have  felt a lightly pedantic sadness around readership of his story, too.  Loneliness is universal. We have all the material goods any group of people could want, but lack a sense of community and suffer from widespread loneliness — so says the Dalai Lama, for what that’s worth. Can the Dalai Lama find Leonid Stadnyk a lady? Or anyone, for that matter?

I hesitate to say it because there is something too precious about the parallel, but Stadnyk’s news coverage does roll out like a fable or fairy tale, or old Biblical story: a gentle, sweet person, too big for his world. He states the conditions of his life simply, not complaining that this or that is wrong-sized, but acknowledging that he is the one who does not fit. He is a good man, cares about his family, tends to animals, has a sense of humour, and wants love. Maybe few people say it so plainly. Who doesn’t want that treasured, prized, almost-impossible experience we delegate to the lucky, and foolish, and worthy?

Leonid Stadnyk, too big for his world, wants love: the biggest thing of all.