There was a time about ten years ago when I saw two operas in one winter. The first was world renowned, the second only seen by loyal subscribers of the Canadian Opera Company and me. 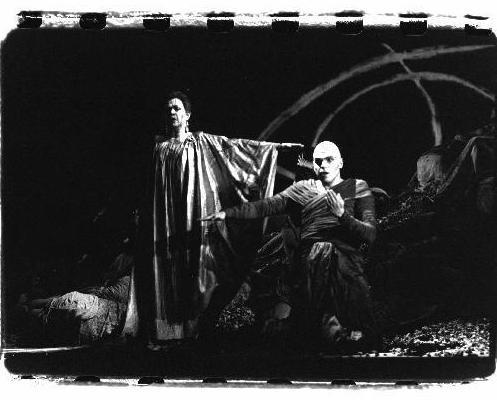 The first was a production of Stravinsky’s “Oedipus Rex” paired with a presentation of the choral symphony “Symphony of Psalms” as a curtain raiser. In that short piece, an invisible hand wrote names of dead people one by one in enormous calligraphy above a line of singers. I can’t remember how I knew they were dead. Still, it seemed stately and reverent until I recall noticing at a certain point that there was room for exactly four more names. The aggregate of all the others had created four rectangular blank spaces of equal size, ready to be filled. I remember thinking, So if they stop singing right now does that mean these guys get to go on living?

The effect, to me, was no longer of a memorial written on parchment. It had turned into a ledger.

The evening continued with “Oedipus,” but I was no longer in any mood to appreciate the bolts of red cloth and huge mountain of plague victims transforming magically into naked writhers caressing their several breasts. Everyone was awed by this spectacle. To me it was reminiscent of the tumescent doodles I would draw in my math notebook when I was fifteen. On the way out of the theatre, I ran into a colleague — a local theatre critic — who said, “Wasn’t that incredible?”

Apologetically, I said I thought it was rather a bunch of bullshit.

The French writer Michel Tournier might call what I experienced “benign inversion.”

I’m sure I don’t understand it in quite the way he intended, since he was writing specifically about Naziism (in his book “The Ogre“), and his title character Tiffauges’ mad reaction against absurd wartime exhortations and slogans. But I identify with the unexpected flip in sympathy while witnessing a performance, when I have observed precisely what I am being compelled to feel, a good audience member, as clearly as if it were a written slogan on the wall, and simply cannot — will not — won’t — no, I won’t! No no no NO!

(Once I remember being in rehearsal for something and expressing the concern that we were going to be guilty of that very presumption, and the director said to me, ‘So what you’re saying is, you’re an asshole.’)

Tiffauges: ‘Has anyone ever tried to define and produce that absolute gray that resists all inversion? I’ve never heard about it if they have.’

Later in that same COC opera season I saw what was considered a modest production of Poulenc’s “Dialogues of the Carmelites.”

The characters wore habits and barely writhed, there were no mounds of bodies or displays of gargantuan penmanship, there were no bolts of red cloth or stentorian sovereigns expressing hamartia. There were no ledgers.

It moved me in a way that I didn’t think was possible with opera.

“The Dialogues of the Carmelites” is set during the French Revolution. A girl named Blanche de la Force seeks refuge in a monastery after her entire family is slaughtered at the guillotine. She is self-centred and petulant and can’t face the truth of what has happened to her.

In the finale, the nuns who have served as the chorus for the entire opera have themselves been sentenced to death. There are fifteen of them, and as they sing in chorus, they go to climb the stairs. A slicing sound cuts off each voice, one by one, until there is only a solo. The last nun, Constance, once confessed the joyful dream that she and Blanche would die together, horrifying her friend. Now, at the moment of Constance’s death, her friend is not here. This is by no means a surprise.

Except her friend is here. She is suddenly standing beside her. She has come to love these women who have been patient with her petulant ways and given her succor and shelter. In the end she does not wish to live in a world without them. And so, without skipping a beat in the music, she follows Constance up the stairs.

The mise en scène is different in the video below, but the scene itself is the same. Its demands are as stripped down and simple as any Beckett play (itself a remarkable feat considering this is a period piece.) White robes, crosses marked on them with charcoal, the illusion of no make-up. No spectacle. Merely humans and song. The music is so simple and powerful, the performers themselves weep through it, at considerable risk to their vocal control.

Was it not expected that I should weep too? Was it not presumed? I wept. Blanche de la Force was selfish, bitter, shallow. She didn’t have any regard for the women who surrounded her, impressive though they were. She was given love and returned nothing. This is who she was, until — just like that — she became the opposite of who she was, transformed from bitter to accepting, from shallow to solid, from fearful to courageous, from weak to strong, from blanche to la force. And, tragically, from living to dead — a mouth open but singing no more.

Blanche de la Force surprised me. She had experienced a reversal, had performed her own kind of inversion.

On my way out of the theatre that night, I ran into a colleague — a fellow playwright — who asked me what I thought of all that bullshit. Abashed and apologetic, I said I supposed I was a sucker for the subject matter. Regarding me as if I’d just been moved by a bodice-ripper, he asked, “What subject matter is that?”