If you’re on this site, you probably like “Glee.” I’m just guessing. It’s that kind of show. It’s a kind of hybrid of irony and sincerity, the sort that acknowledges its cheesy fundamentals while not only fully exploiting them, but embracing them as well. Post post ironic, maybe?

There’s probably a good word for it, something coined in the first half of the 18th century when the same thing happened somewhere, probably.

It’s also likely you like it because it’s got a gay guy, a nice jock, an Asian girl, two Jews—one stereotypical (a way of saying there’s nothing wrong with that), one really not (unless you count the Israeli military stereotype, which US television mostly does not)—a black girl, fat and proud, and a nerd in a wheelchair. If the characters weren’t so filled out, with ample storyline given to all, they would seem a lot more like what they are: an affirmative action checklist.

But what gets me about it is a thing that is so culturally invisible, it never has nor likely ever will make it on to one of those lists.

Look at that still once again. Look at our Asian girl. She’s not just Asian. She’s got a tummy.

The tummy got some play in “Pulp Fiction,” but only from a waif who thought she might like it, and even then, only one like Madonna in her “Lucky Star” phase. That is, more an absence of obvious abs than the presence of a tummy.

But look at Jenna Ushkowitz (yup, that’s her real name). That’s a tummy. We’ve become fine—maybe we always were fine—with fat and black. And Roseanne and 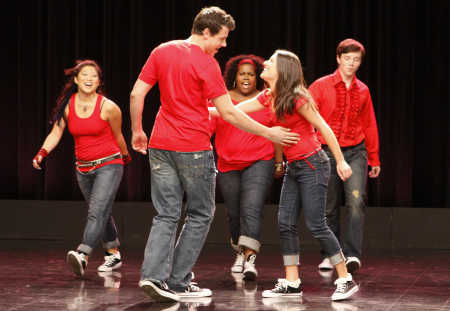 John Goodman made fat and trashy visible in a way that didn’t actually make fun of the fat. But we’re usually fine with extremes in visual culture. Ushkowitz’s tummy isn’t extreme. It’s the tummy of someone who either doesn’t care too much about the world of flat, or simply eats what she likes and doesn’t pay for it with the sort of exercise whose main goal is expiation.

This is a normal person’s tummy, a normal girl’s tummy. And it’s on TV. And it’s in a tight tank top. I don’t foresee banners and documentaries. But I am more impressed with this than I am with “Dancing With Myself” (which I loved).

Kevin McHale of “Glee” singing “Dancin’ with Myself” by Billy Idol

I think this is a breakthrough, this new form of reality TV. Bring on the next tummy.

The Quintessential Song Of The 00s

The Quintessential Song Of The 90s

The Quintessential Song Of The 80s

The Quintessential Song Of The 70s

RSS Feed
Bert Archer is a Canadian author, journalist, travel writer, essayist and critic. He is the author of "The End of Gay" (and the death of heterosexuality). More Bert Archer here.