You ran an ad on television during the Superbowl this year showing a bunch of pantless men running through a field chanting, “I wear, I wear, I wear no pants!” At the end, you see a guy in khakis and a voice-over proclaims: “Calling all men: It’s time to wear the pants.”

How clever, I thought at the time, an ad playing on that old idea that “men wear the pants.” I’ll admit, it was kind of cute.

But then you ruined it, Dockers. You followed up with a print campaign on the same theme that took it in a wrong direction. I copied this down from the streetcar shelter near my apartment a couple weeks ago: 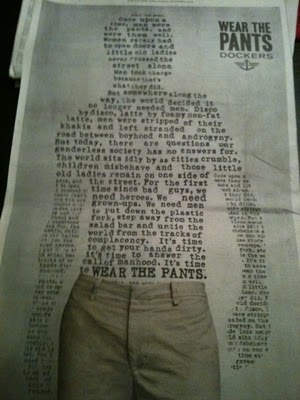 “Once upon a time, men wore the pants, and wore them well. Women rarely had to open doors and little old ladies never crossed the street alone. Men took charge because that’s what they did. But somewhere along the way, the world decided it no longer needed men. Disco by disco, latte by foamy non-fat latte, men were stripped of their khakis and left stranded on the road between boyhood and androgyny. But today, there are questions our genderless society has no answers for. The world sits idly by as cities crumble, children misbehave and those little old ladies remain on one side of the street. For the first time since bad guys, we need heroes. We need grown-ups. We need men to put down the plastic fork, step away from the salad bar and untie the world from the tracks of complacency. It’s time to get your hands dirty. It’s time to answer the call of manhood. It’s time to WEAR THE PANTS.”

First of all, I’ll admit it’s catchy and you actually had me for a minute there. People should be more respectful of the elderly. Yes! People should be courteous and hold doors open for each other. Yes! It is even true — as I’ve personally heard many young women insist — that men need to step up their game again, turn off the XBox, engage with the world around them, and make decisions. But Dockers, then we come to your vague and completely unexplained attack on androgyny and what you call the “genderless society.”

Here we’ve spent decades getting to the point where people are starting to feel comfortable about the specific point on the vast gray area of identity that they occupy and in your small way, Dockers, you are trying to undo that.

Men and women — and those outside and in between — have, more and more, been encouraged to behave and dress as they please. Or, as I believe philosopher Judith Butler would put it, be the artist of their own gender performance. People are generally happier and more loving people when they are free to do this without criticism.

I have no scientific evidence for that claim, but Dockers, doesn’t it ring true? If a culture accepts and loves you for who you are, doesn’t it make sense it would breed the same in return? Cities and families crumble because of narrow-mindedness, Dockers.

Way back in 1984, Paul Westerberg wrote a song called “Androgynous” for his album “Let It Be.” The song was covered by the Crash Test Dummies in 1991 for “The Ghosts That Haunt Me,” the first tape I ever bought. As I explored my sexuality and navigated the treacherous path of what kind of person I would become, this song about the flexibility of gender expression made me believe I had limitless choices and that it was all okay.

I love in particular the lines of reassurance to the kids who dared push the gender boundaries, some of whom, in the state where I am from, were beat up or even killed for it.

And Dockers, notice at the end of the song — if I’m understanding it correctly — Westerberg reverses it so that the guy, Dick, is wearing pants again and Jane is wearing a dress. Naturally, some women — most, probably — will want to wear dresses and some men will want to wear pants. In other words, a lot of people will choose to be feminine or masculine in traditional ways.

Dockers, I am concerned. I found a number of follow-ups of your original commercial on YouTube, more than one of them involving children intrigued by the ad.

I’m not saying this kid has any idea what sort of propaganda he’s learning from your campaign, but Dockers, that’s exactly the problem. I know you need to come up with clever, provocative ads to sell your product — in my own way, I do the same thing all the time — but you have a responsibility to do it conscious of the fact that you are, as a side effect, educating children.

Joan Jett covered “Androgynous” four years ago. In the video to the song, Jett is teaching a bunch of schoolchildren that love can exist between two people comfortable with who they are, no matter how they dress, or act.

Dockers, after watching that don’t you feel ashamed? Do you still want to make a lot of good people feel bad about themselves?

Dockers, I have to cut this letter off now – I’m about to head out to the disco. But I want to make sure I’ve made my feelings clear: I think your ad campaign is a piece of shit.

The First One Not To Die

RSS Feed
Micah Toub is a writer living in Toronto, Canada. His memoir, Growing Up Jung: Coming-of-age as the Son of Two Shrinks, is published by W.W. Norton and Doubleday Canada. A National Magazine Award-winning journalist, he was also a longtime relationship columnist for The Globe and Mail and his writing has appeared in The Walrus, Canadian Family, Psychology Today, and Maisonneuve. He has worked as an editor at The Globe and Mail and Toro Magazine. For more Micah Toub, go here.